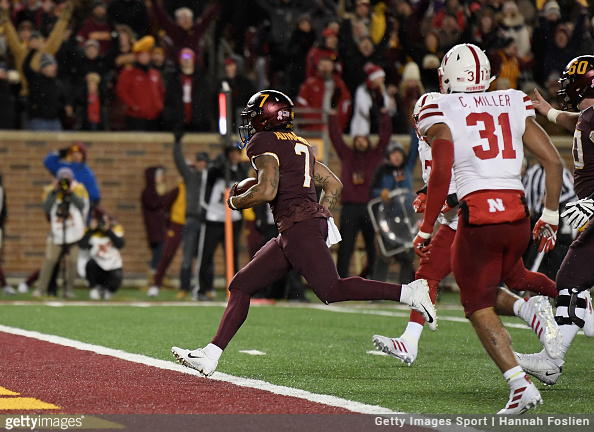 Heading into a bye week, Scott Frost said he wanted his team to empty the tank. But I don’t think he meant before the opening kickoff.

That’s pretty much what it looked like as Nebraska was beaten to a pulp on both sides of the line of scrimmage Saturday night in Minneapolis.

With the Gophers coming in undefeated, I’d wager that few people were too surprised to see the Huskers lose, but to see a Scott Frost-coached Nebraska team that looked like it didn’t really want to be there was unsettling.

This team looked poorly prepared, undisciplined and bewildered. With nothing in the tank. It pretty much came down to this: Nebraska’s defense could not make the tackle at the point of attack. Minnesota’s could and did. Husker defensive linemen lost a whole lot of one-on-one battles at the line of scrimmage. So did their teammates on the offensive line. When you’re losing one-on-one battles, it really doesn’t matter much what plays you dial up on offense, or what schemes you cook up on defense.

Losing is one thing. The Huskers could have easily withstood a loss and entered their first bye week at 4-3 with plenty of hope for the stretch run. But can they pull themselves together and win two more games after an awful loss like this one?

Here’s the bad news about Nebraska. The Cornhuskers’ run defense, which was the one thing Frost’s team did best over the first half of the season, still is not ready to play Big Ten football. This is not a physical football team — not yet, anyway. If you have a stout line and a couple of decent running backs, you can beat Nebraska soundly by simply lining up and pounding the ball over and over. Wisconsin and Iowa have already taken note. I wonder who else? Minnesota came into the game averaging fewer than 190 rushing yards per game. But they hammered the Huskers for 322 yards and ran at will from their first snap of the game. By midway through the second quarter, Husker defenders looked like they didn’t want to be on the field, while playing in one of the least intimidating settings you can imagine.

I don’t know if the Husker offensive and defensive linemen feel embarrassed, but after watching them get pushed around most of the night (even Husker o-linemen were getting pancaked) much of Husker Nation is embarrassed for them. Frankly, it looked to me like P.J. Fleck was a little sheepish at how easily his team handled the Huskers. The 34-7 final score was misleading. The Gophers piled up 220 yards rushing at halftime, and they could have run up more points than they did. And all this on a night with no turnovers by either team. I mean, c’mon! The Gophers couldn’t push around Georgia Southern nearly this easily.

The linebacking was every bit as poor as the defensive line play. Mohamed Barry, Will Honas and Collin Miller consistently overran plays, and on the rare occasions when Alex Davis was able to set the edge, Barry, Honas and Miller were unable to get off blocks and make tackles until far downfield. And the Husker defensive backs? They weren’t really tested. Outside of Tyler Johnson’s five receptions, Minnesota highly touted receivers pretty much got the night off. Quarterback Tanner Morgan didn’t need them.

It was bad enough that Minnesota turned the Blackshirts into roadkill, but the rapidly shrinking Husker offense got even smaller when Wan’Dale Robinson left the game with what appeared to be a serious lower leg injury. Without Robinson, it’s hard to imagine Nebraska scoring 24 points against anyone remaining on their schedule, including Indiana, Purdue and Maryland. Maurice Washington and Dedrick Mills were ineffective behind an offensive line that didn’t look like it belonged on the same field with the Gopher defense. Noah Vedral, who got the start and played well into the fourth quarter, provided a spark at times. In fact, Nebraska threatened to score three separate times in the first half, but penalties or offensive line breakdowns gutted all three drives.

Vedral appeared to suffer a lower leg injury on his last carry before Dedrick Mills scored the Huskers’ only touchdown in the fourth quarter. And on the Husker Radio Network postgame show, Frost made the cryptic statement that his team had “two injured quarterbacks” by game’s end. How badly Vedral was hurt or how quickly Adrian Martinez returns, is a guess at this point. Sure, what else could go wrong, on a night when you twice give up first downs to Minnesota on simple third-and-long running plays, or when one of your best and most experienced players, J.D. Spielman, inexplicably tries to fair catch a punt at his own 5-yard line, fumbles the ball, and is lucky to recover it at own 2?

As I watched the second half degenerate on FS1, the commentators seemed embarrassed for Nebraska. They said things like, “The Huskers are playing sloppy, but more than that, they have just not been intense.” And it was easy to lip-read Frost yelling at his team to “Run off the field! Run off the field!” as they trudged to the sidelines early in the fourth quarter.

After Robinson left the game, Kade Warner finally returned to meaningful action. Warner made three receptions late in the game, and he’s a welcome addition, but that’s not a good tradeoff for the Huskers, who are running out of firepower on offense with an offensive line that appears no better than it did at the beginning of the season. The Husker offensive line may not be getting any worse, but when they go up against the Wisconsins and Iowas of the league, they will look badly outclassed.

“We got pushed around on both lines of the ball,” Frost said. “Their running game was consistent and ours wasn’t. They ran plays we expected them to run, and we couldn’t stop them. We got beat tonight because they did those simple, fundamental things better than we did.”

Minnesota (6-0) is a good team, but not good enough to justify this level of embarrassment.

I’m very sure that Frost cares deeply about the loss, and I’m reasonably sure his staff does as well. Yet you’ve got to think the lack of motivation against Minnesota is on the coaches. I really wonder about this team right now. Words will be empty until Husker players show they have some fire in the belly once again. I get the feeling that over the next two weeks, Husker Nation will care very little about words and a lot more about deeds Oct. 26 against Indiana.