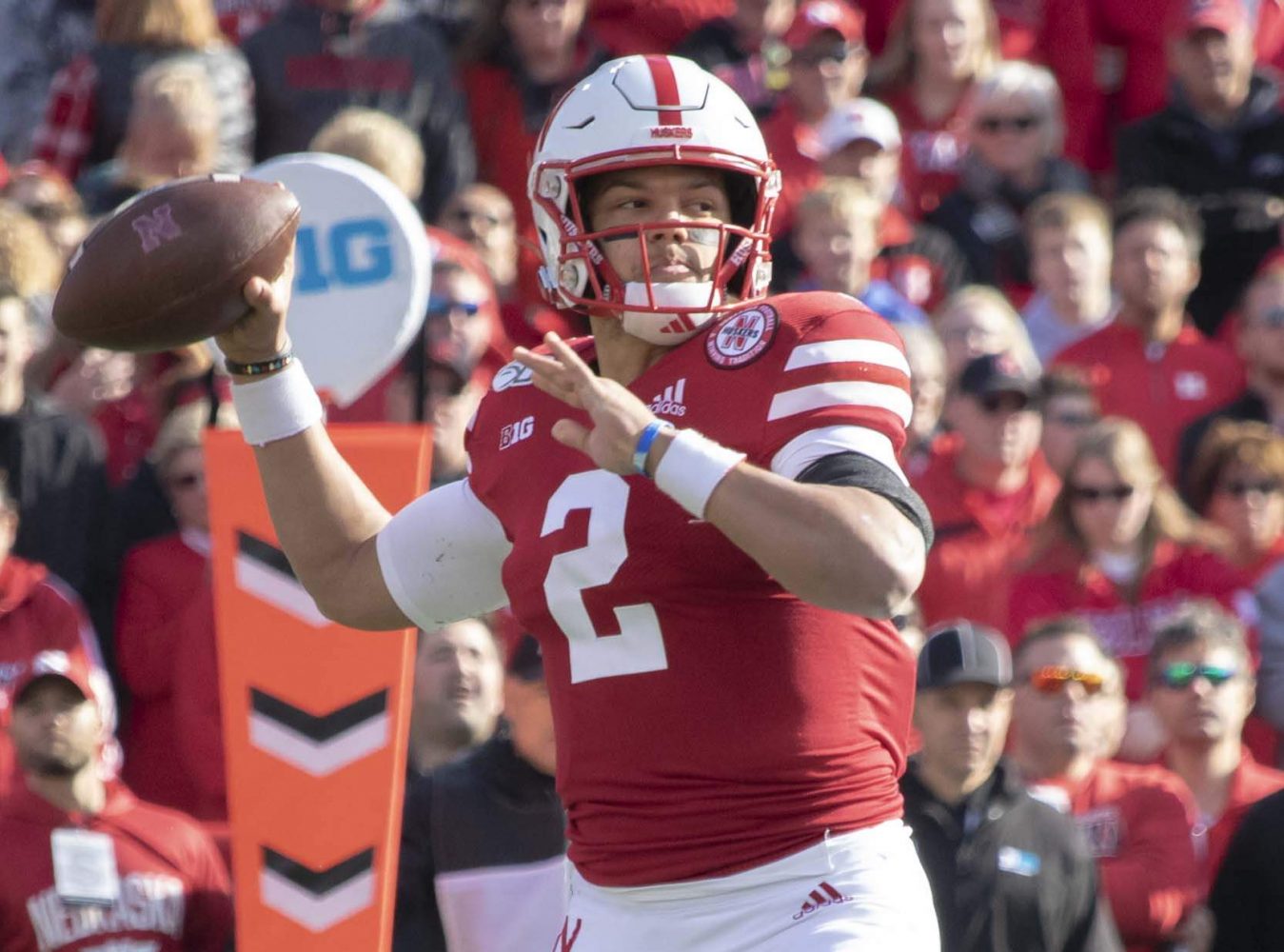 Kenny Larabee, KLIN
Adrian Martinez had his ups and downs against the Badgers.
By Tad Stryker on 11/16/2019

Playing without freshman phenom Wan’Dale Robinson, Nebraska came out and hit Wisconsin in the mouth early. The Huskers made a superior Badger team scramble, but couldn’t sustain their effort as the game wore on.

The Badgers got their own running game lathered up late in the first half and stopped several promising Nebraska drives to win 37-21 Saturday afternoon in Memorial Stadium. It’s the Huskers’ seventh consecutive loss to Wisconsin, but at least this one doesn’t taste nearly as bad as the last several.

The best news of the day for the Big Red was that junior running back Dedrick Mills broke loose for 188 yards and a touchdown on 17 carries. As a team, Nebraska rushed for 273 yards (7.4 yards a carry) against a Badger team that came into the game allowing only 84 yards rushing per game. That’s something to build on.

It was stunning and gratifying to see the Husker offensive line open some gaping holes against a quality opponent. Key question: why did Mills carry the ball only five times in the second half? It wasn’t because of injuries. Mills looked good after the game and had a spring in his step as he walked toward the locker room.

Mills’ big day was the highlight of Nebraska’s offensive output — 493 yards on only 60 snaps, or 8.2 yards per play. It was a big improvement against a stout defense, but not enough to keep from getting pushed to the brink of this season. The Huskers rolled out one of their 2018-style, “lots-of-yards, not-enough-points” games, but with fewer penalties and turnovers. They outyarded the 8-2 Badgers 493-482, but could not finish enough drives. Nebraska lost the ball on downs at the Wisconsin 34-, 15- and 1-yard lines and missed a field goal after penetrating to the Badger 24.

“We were inside their 40 eight times and came away with 21 points, and that’s not good enough,” Frost said.

Sophomore quarterback Adrian Martinez continues to be a mystery. He’s playing with grit, but not with clarity. When he’s decisive, he looks good. When he’s indecisive — which is often — he flounders, and promising Husker drives die.

Martinez had 309 yards of total offense to move past Jerry Tagge into eighth place all-time for the Huskers. He completed 13 of 23 passes for 220 yards with one interception, and he took four sacks. He ended his long touchdown pass drought with a 23-yard strike to a wide-open J.D. Spielman in the third quarter. He now has eight touchdown passes and seven interceptions this season.

Martinez broke away from his own goal line for a 45-yard run early in the fourth quarter. He followed his blocks well, but did not flash the speed and elusiveness he showed last year. He’s not fully recovered from his knee injury.

The long-awaited run game improvement is good to see, and it speaks promisingly for 2020. But this is where the 2019 Huskers pay a huge price for their come-from-ahead losses to Colorado, Indiana and Purdue — all games they should have won. The Huskers, who certainly could have qualified for a bowl by now, instead have absolutely no margin for error against Maryland and Iowa just to make it to 6-6.

The game turned on two consecutive plays from scrimmage midway through the second quarter, after the Huskers took a 14-10 lead. It started when the Huskers’ tackling started to crack. Wisconsin wideout A.J. Taylor broke free for a 55-yard touchdown pass when he lost JoJo Domann on a crossing route, and ran the final 35 yards after DiCaprio Bootle bounced off while trying to shoulder bump him to the ground and safety Cam Taylor-Britt whiffed.

On the next play from scrimmage, Wisconsin linebacker Chris Orr tipped a Martinez pass, which fluttered to linebacker Jack Sanborn, who returned it to the Husker 21, setting up the first of All-America running back Jonathan Taylor’s two touchdowns. From that point on, Wisconsin played its clock-grinding game, and Nebraska played catchup.

Martinez waited too long on his interception, a play he had all kinds of time to look for receivers. He hesitated twice on his 20-yard sack in the third quarter, which gutted a promising drive.

Taylor rushed for 204 of Wisconsin’s 320 rushing yards — many of them coming after contact. The Husker defense got its first fumble recovery since the Northern Illinois game, but their tackling got sloppy after the middle of the second quarter.

With both Carlos Davis and Darrion Daniels sidelined by injury, Damion Daniels played his first-ever 30-snap game for the Huskers. Freshman Ty Robinson played about a dozen snaps at nose tackle. At 6-foot-6, he looks more like a defensive end, with decent agility. Robinson got a quarterback hurry in the third quarter. The snaps he got against one of the better college offensive lines in America should be a valuable learning experience. I wonder why fellow freshman Nick Heinrich didn’t get any playing time at linebacker.

The Wisconsin pass rush was part of the reason for the inconsistency of Martinez. The Badgers had four sacks, and seven tackles for loss. The Huskers had to run the ball well because their veteran offensive tackles cannot protect against edge rushers. This leads to another missing-freshman question: where was Bryce Benhart, the big right tackle from Minnesota? Why didn’t he get a sniff of the field? He has played only one game all season, and now he won’t play in four unless the Huskers make a bowl game.

Whether or not Benhart plays against Maryland, the Huskers look to have a decent chance to get their second road win of the season if they can run-block the way they did against Wisconsin. That would set up a win-or-go-home game against Iowa on Senior Day.