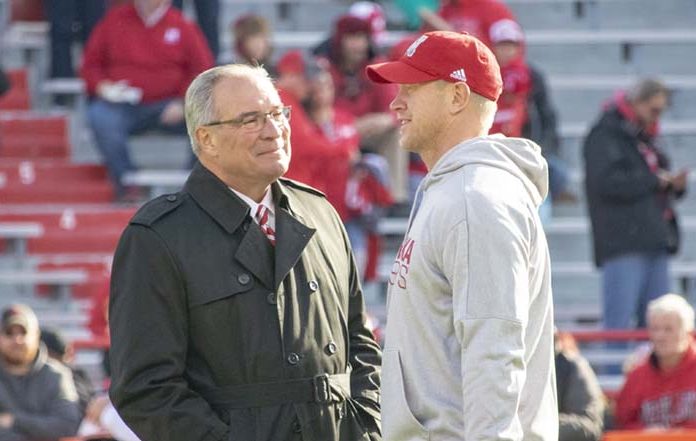 Kenny Larabee, KLIN
Unified support from upper administration will be crucial for Scott Frost in the coming decade.
By Tad Stryker on 12/28/2019

If you’re getting ready to flush the past decade of Nebraska football, I have two things to say to you:

That’s not a bad idea, not bad at all. But before you flush, pause for a bit of historical perspective.

There were some good moments during the past decade but, taken as a whole, the 2010s provided plenty of evidence that the Cornhuskers were not ready for the Big Ten upon arrival. Scott Frost’s biggest task now is to fix the problems that Bo Pelini and Mike Riley could not.

There’s a lot of hard work to be done. The biggest problem is this: You can’t just buy a new heart off the shelf and transplant it into a football program. It has to be rebuilt. It has to be hand-crafted.

Does Frost know how to do that? Everyone invested in Husker football is betting he does, and they’re going to give him what he needs to do it. He has the pedigree. He has the passion. He has the pattern. He not only saw what Tom Osborne had going; he lived it. But it’s patently obvious that he and his relatively young staff are scrambling to learn on the job.

Does he have the patience? More importantly, does he have the perceptiveness? Does he really understand what it takes to win in the Big Ten? Can he catch up to his coaching peers? Can he re-create the soul of what Husker football was and put his own stamp on it? If so, he needs to get with it. His record in Lincoln (9-15) looks a lot like the 1940s, the worst decade in Husker history. To be fair, Nebraska football was a dumpster fire when Frost arrived. But now, after two seasons spent rebuilding the foundation, it urgently needs a turning point. Frost and his team whiffed time and time again this past season as they tried to raise the program to the next level.

Frost’s biggest challenge is to reintroduce discipline and physicality. It’s a tough job, a bigger one than most observers realized when he took over. But Frost’s biggest advantage is that he doesn’t have Steve Pederson or Harvey Perlman or Shawn Eichorst working against him, so the outlook is good for the 2020s.

I called the 2000s the Decade of High Expectations, because Nebraska fans continued to demand excellence and seemingly kept the train on the rails despite the firing of Frank Solich and the hiring of Bill Callahan — two of the worst decisions in the history of the program, decisions that caused gaping wounds throughout the football office. That decade ended on an Ndamukong Suh-fueled upswing, with Pelini coaching the Huskers to nine- and 10-win seasons and a berth in the Big 12 Championship. But the promise faded over the next few years. Fan expectations and support are still remarkably high in Husker Nation, but they can take a team only so far. Healing has to come from within.

The 2010s were the Decade of Instability. Pelini brought a complete change of philosophy when he replaced Callahan, and Riley did the same when he took over for Pelini. Pelini’s assistant coaches were constantly in flux, most notably in the secondary. That continued under Riley.

Over the decade, the Husker football program had three head coaches, four offensive coordinators, five defensive coordinators and almost too many defensive backfield coaches to count. Since players mirror their leadership, Nebraska football became increasingly undisciplined, bordering on chaotic. It continued into the first two years of Frost’s leadership, which provided another stark change from Riley. In some ways, Frost has been stymied building a foundation because he had to wait for seismic shock waves to subside.

Frost and his staff will provide stability. They absolutely have to. In turn, stability needs to conjure up consistency. The past season showed that Frost and his staff have a steep learning curve to deal with; they are farther behind the Paul Chrysts, James Franklins, Jim Harbaughs, Tom Allens, Jeff Brohms, Pat Fitzgeralds and Kirk Ferentzes of the league than we thought in December 2017.

It almost goes without saying that to earn his way into the top level of the Big Ten coaching fraternity, Frost needs to embrace a healthy dose of humility and just keep plugging away with minimal comment, at least until he establishes that offense he’s so proud of. So far, in 18 conference games, Frost’s Huskers have scored 30 or more points only six times, and they’ve averaged just 27.4 points per contest.

Not surprisingly, Frost apparently has bought into the idea that defense wins games in the Big Ten. His 23 recruits in the class of 2020 include 16 defensive players. Just as importantly, he is building physicality into the team. Huskers need to become at least as physical as anyone else in the Big Ten West, or they won’t sniff a division title.

You don’t have to run Osborne’s power-I option, or even the same offense as Wisconsin or Iowa, to be physical. Frost is figuring out how to spread a defense and hit it with a smashmouth sequence; his Chip Kelly-influenced offense actually lends itself well to physicality, especially if he gets serious about mixing in the speed option he teased us with during the second quarter of the Ohio State game. Why we never saw a glimpse of it again the rest of the 2019 season is hard to understand, especially later on, with Adrian Martinez compromised by injury and Luke McCaffrey available.

It appears the Class of 2020 will boast a better mix of speed and physicality than previous classes, starting with offensive tackle Turner Corcoran, wide receivers Omar Manning and Zavier Betts, running backs Marvin Scott III and Sevion Morrison, and linebackers Keyshawn Greene and Eteva Mauga-Clements. A 6-foot-3, 220-pound transfer rated the best junior college receiver in the nation for 2019, Manning can make a huge difference if he consistently gets off the line of scrimmage cleanly and gains separation, giving Husker quarterbacks another reliable target besides JD Spielman. And if the Huskers are to build a Big Ten-worthy defense, they need someone like Mauga-Clements or Greene to shore up an unproven linebacker room, showing early evidence that he can run the field, taking proper angles and making tackles in open space.

One thing’s for sure. To succeed, Frost must set a more physical tone for the next 10 years of Husker football.

I’ll join you in flushing the past decade. But I have a lot of hope for the next one.