Stryker: Are Cheeseheads as spoiled as Husker fans of yesteryear? 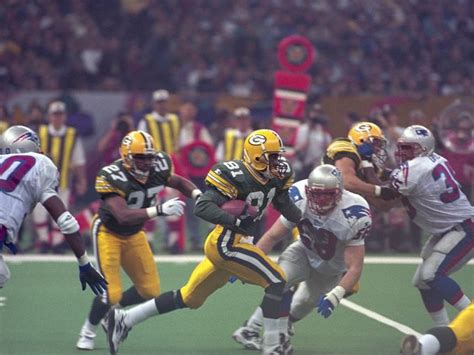 packersnews.com
Packers fans are crazy about speedy wide receivers like Desmond Howard.
By Tad Stryker on 5/1/2020

Nationally, the NFL Draft was a timely, agreeable oasis for a nation starved of meaningful sports news. At my house, it was equally welcome; I watched most of the first round, and about half of rounds 2 and 3, which means I tuned in for more of the draft this year than the past five years combined. Despite its socially-distanced, toned-down vibe (or maybe because of it), the draft seemed more like a football event and less like a contrived reality-TV show, so I credit ESPN and the NFL for that. We caught glimpses of bona fide emotion from the families of drafted players. We got less scripted nonsense from large studio audiences who gather more to be seen than to cheer on their teams. I liked the family-oriented “look-in” format, even before the live cameo by Bill Belichick’s dog.

The downside was all the second-guessing, much of it fueled by ESPN reporters. Inevitable, I know, but this year, much of it focused on my favorite NFL team.

The Packers were a big story on Day 1 with their selection of Utah State quarterback Jordan Love. (The media have been speculating for years when Green Bay would draft a successor to Aaron Rodgers, and when it happens, ironically almost nobody’s happy.) Much of the national sports media — and many of my fellow Packers fans — viewed this move as a betrayal of Rodgers, a closing of the window on the effort to win a second Super Bowl with Rodgers at the controls. I was surprised at the move (I expected the Pack to take a defensive lineman or linebacker in Round 1), but I think the “Rodgers betrayal” narrative was a bizarre overreaction. Why does everyone assume Rodgers will handle it like an emotionally fragile prima donna? But after Day 2, the onslaught increased in volume, and it became evident that the critics of Packers general manager Brian Gutekunst simply don’t understand his strategy.

I think I do, and it has little to do with mortgaging the present to win in the future. Green Bay is becoming a run-first team. Of course, Nebraska proved last year that you can be a run-first team (the Huskers ran the ball 62.7 percent of the time last year — 59.6 percent when you adjust the totals to eliminate sacks) without being an effective run-first team. But I think that’s going to change also (more on that later).

Frankly, I like the Packers’ second-round selection of 247-pound running back A.J. Dillon, who seems like the kind of player who could punish worn-down defenses on frigid December afternoons. I also like the third-round choice of multiple-threat tight end/H-back Josiah Deguara.

Gutekunst and coach Matt LaFleur apparently want a tougher, blue-collar running game, something the Packers have not been known for during the Rodgers era. Vic Ketchman, who worked in corporate communications for several NFL teams, including the Packers, has said for years that Packers fans have “wide receiver fever,” and it looks like he’s right. They’re blowing their collective gasket now because Green Bay didn’t draft a single wideout this year. An astonishing number of them think that drawing up four- and five-wide sets and depending on Rodgers to channel his inner Jedi with miraculous off-balance throws on third-and-long is the only way the Pack can win games. The ones angry because Gutekunst “didn’t get Rodgers any weapons” in the draft appear to be prejudiced toward only certain kinds of weapons.

It’s odd that Packers fans who desperately want to find a way to beat San Francisco and want to fire the clueless Gutekunst don’t see that he’s starting to develop a similar offense to the 49ers, who have a three-man rotation at running back and top-level tight end in George Kittle. By trending toward power football, Green Bay, a franchise once defined by the Lombardi power sweep, is trending toward a more balanced offense.

This is a welcome change for a Packers fan who likes the fact they’re a cold-weather team who plays outdoors on grass, but even more than that, likes the history of a small-town team that’s the biggest thing going in the region, a team that sells out its stadium as well or better than franchises in much larger cities. Sound familiar?

There’s just one thing about the Packers I really didn’t like; they played finesse football. They’re one of those teams that pass on third-and-short more than half the time. That has placed a lot of burden on Rodgers over the past decade, and for the most part, he’s been equal to the test. But I don’t see the harm in dialing back the Packers’ reliance on the arm and reflexes of an aging quarterback, even if he’s one of the best of all time.

Possibly my loyalties to Green Bay are open to question. Don’t tell anyone this, but I have a good friend who roots religiously for the Chicago Bears. We even played on the same softball team one summer without coming to blows.

Rodgers has bedeviled da Bears Fan for years with his wizard-like escapes and completions in crucial situations. He has dealt crippling blows to Chicago teams year after year, ripping the hearts out of Soldier Field crowds with come-from-behind bombs to Randall Cobb and Jordy Nelson in the frozen, dying seconds of big games. The trouble is, eventually that magic is unreliable. The Packers are better off when they can depend on their run game and play from ahead.

Could it be that the two teams I follow closest — the Huskers and Green Bay — are turning their focus to increased physicality on offense?

Greg Austin, the Husker offensive line coach, seems to think so. Frankly, the sooner the Husker resume their blue-collar mentality, the better.

Do I hope Adrian Martinez and Omar Manning rip the top off the Wisconsin defense with a 70-yard touchdown pass this fall? Absolutely. But I’d much rather see Dedrick Mills tear off five- and 10-yard chunks and slowly bleed the Badgers to death.

Nebraska has got to be able to run for a touchdown when it takes over first-and-goal at the Purdue 2-yard line. Austin, the Huskers’ new run game coordinator, supports a more north-south approach.

“Let’s attack them. Let’s get vertical,” Austin said in March, at the start of what turned into an abbreviated spring practice. I’m a believer. The ability to run downhill football — even the threat of downhill football — should make the Huskers a better passing team as well.

That would be a welcome change for Scott Frost’s offense, which really needs to start averaging 35 points per game in the Big Ten. If that happens, announcers like ESPN’s Trey Wingo will start looking for different story lines than “Can you believe Frost didn’t think Joe Burrow was good enough for the Huskers?” As if any coach who saw benchwarmer Burrow leaving Ohio State in the spring of 2018 thought to himself, “Hmm, yep, that guy’s gonna win the Heisman and go No. 1 in the NFL Draft.”

An effective run-first focus will help Adrian Martinez and the Huskers, just as it will Rodgers and the Packers. Run off tackle, run between the tackles, run the power sweep, I don’t care, just move the sticks. It’s not stats, it’s the ability to run effectively when you need to.

So I don’t buy in when misguided Cheeseheads spew garbage like, “Gutekunst should be fired. He just waved the white flag on the Rodgers era.”

My friend da Bears Fan scratches his head about statements like that. He has achieved perspective, having weathered many a losing season. (Well, whaddya expect when you root for a team that uses a toilet seat for a logo?) He wishes he could have a few of the problems Packers fans complain about these days.

But let me confess that as a Husker fan in the late 1970s and mid-1980s, I made similar statements, as I complained about Billy Sims (who was on his way to winning a Heisman Trophy) trampling undersized Nebraska defensive backs and grumbled about Osborne’s bowl game losing streak.

I didn’t know how good I had it. It took a couple of losing seasons under Bill Callahan to give me enough perspective to truly appreciate Osborne’s steady plodding through the 1970s and ’80s. I don’t think I needed four more losing seasons under Mike Riley and Frost to understand it, though. Maybe Packers fans do.