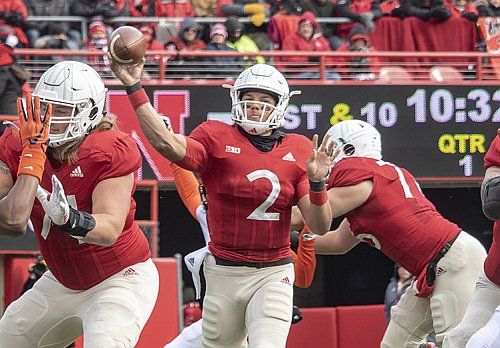 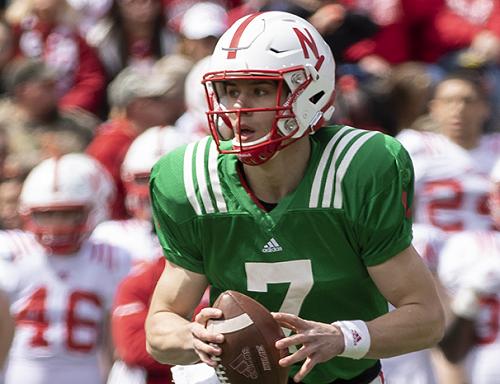 Kenny Larabee, KLIN
By Jeremy Pernell on 8/22/2019
Last season, Adrian Martinez became the first true freshman in program history to start an opener at quarterback. In doing so, he became the first freshman and just the seventh player ever to accumulate 3,000 yards of offense in a season. Martinez played in 11 games, missing the Troy loss on Sept. 15 – thanks to a knee injury he sustained after some extracurricular activity following a tackle by Colorado’s Jacob Callier the week prior. Actually ten and a half if you want to get technical; he was still hobbled against Michigan on Sept. 22 and was pulled at halftime in a decided game.

Martinez rewrote Nebraska’s freshman record book and also left his mark on the Huskers’ overall season charts. In all, Martinez broke 11 school records. His 295.1 yards of total offense per game is a school-record that ranked first among all FBS freshmen in 2018 (ninth-best mark by a freshman in NCAA history) and was good for 12th nationally. His 3,246 yards of total offense ranks fifth in Husker history, behind Taylor Martinez (3,890 in 2012), Joe Ganz (3,826 in 2008), and Tommy Armstrong (3,430 in 2015 and 3,400 in 2014). He’s only 1,694 yards from being in the top 10 on the NU charts in career yardage, which means he might crack that list before the calendar turns to October.

He finished eighth in school history in passing yards in a season (2,617), sixth in completions (224), 10th in passing touchdowns (17), first in total 300-yard games (7) and tied for the school record for total 400-yard games (3). His 443 yards against Wisconsin rank as the third most in a game by a Husker player, with his 414 yards against Purdue ranking 11th and his 401 against Minnesota ranked 15th. He also finished second in completion percentage (64.6), but even more impressive is Martinez’s adjusted completion percentage was actually 74.8 percent.

His playmaking ability exceeded even the most optimistic expectations for last season. A true dual-threat, Martinez tied for third among Big Ten quarterbacks with 18 completions of 30 or more yards. He also finished fourth in the Big Ten in 10-yard runs with 30, and that’s among all Big Ten players, not just quarterbacks – where he led the way. In fact, only six quarterbacks in Division I football had more 10-yard runs than Martinez. He collected 8 rushing touchdowns and finished with 629 rushing yards, which was the fourth most ever by a Husker true freshman – regardless of position, and once again tops for a quarterback. Sacks count toward a QB’s rushing totals in college football, so Martinez actually rushed for 825 non-sack yards.

Martinez really started hitting his stride as the season progressed. Over Nebraska’s final eight Big Ten games, the 6-foot-2, 225-pounder averaged 340.8 offensive yards per game, and scored 20 of his 25 touchdowns. He became the sixth freshman (only the second true-freshman) since 1990 to average 200 yards passing and 50 yards rushing in a season (237.9 passing and 57.2 rushing), and the first to hit those averages at a Power Five program. Martinez was also one of just four FBS quarterbacks – regardless of class – who averaged 225 passing yards and 50 rushing yards per game in 2018. He’s such a special talent, no one would be surprised to see him throw for 3,000 yards and rush for 1,000 in a season at some point in his career.

His ceiling is as high as any quarterback to come through Lincoln, but he’s obviously not a finished product. Martinez has plenty of things to work on. During Big Ten media days, Martinez mentioned cutting down turnovers and improving red zone efficiency as two areas he is working to improve. Martinez had 14 total turnovers last year. He threw 8 interceptions, but it was the fumbles that were most concerning. He tied for the national high with six lost fumbles and put the ball on the turf 12 times, which was the second most nationally. The Huskers also struggled in the red zone, where they converted only 61.36 percent of its possessions into touchdowns. That ranked seventh in the Big Ten and 67th nationally. To put it in perspective, Nebraska averaged an impressive 6.31 yards-per-play (20th nationally), but that only translated into 30 points per game, which was 58th in the country.

Beyond that, there are the natural progressions he needs to make as a facilitator in this offense. He needs to quickly identify the different coverages he will see. He needs to know, ok, was that cover-3? Was that cover-1? Was it cover-zero? Was it quarters? He needs to know how Frost wants to attack certain looks. What matchups are they trying to exploit in specific situations? The two of them need to be on the same page. That’s something Frost has mentioned this offseason. He wants Martinez to not only execute the plays he calls at a high level, but he also wants him to know why he called them. At Big Ten media days, Frost talked about the synergy he shared with Tom Osborne. “By my senior year when I got the formation and knew the down and distance and situation in the game, I bet I could have guessed 80 or 90 percent of the time what play was coming from Coach.” That’s the goal, ultimately for Martinez as well. He needs to continue to master the “How’s” and the “Why’s.”

There are big expectations for Martinez and this offense heading into year two. Nebraska averaged 456.2 yards of total offense in 2018, the most for a Husker team since 2012. What kind of encore can we expect? The sophomore has solidified himself as one of the most promising signal-callers in the Big Ten and the country. Martinez has been named to the preseason watchlist for the Walter Camp Award, given to the 2019 Player of the Year, as well as the Maxwell (best all-around player), Davey O’Brien and Manning (top quarterback) Awards. He is also getting early Heisman Trophy buzz, and is currently fourth on the Las Vegas odds boards, behind only Trevor Lawrence, Tua Tagovailoa and Jalen Hurts.

The only question at quarterback is who will earn the QB2 spot. Coming out of spring, sophomore Noah Vedral had the upper hand but that gap may have closed a bit this summer. The 6-foot-1, 200-pounder was initially ruled ineligible for the 2018 season after transferring to Nebraska in January. After missing the first five games, Vedral was granted a waiver by the NCAA on Oct. 12. He made his Husker debut two weeks later, playing the entire second half against Bethune-Cookman, while preserving his redshirt. He spent the 2017 season as McKenzie Milton’s backup at UCF, seeing action in eight games. Vedral knows the offense and should be a serviceable backup for the next three years.

Also providing valuable depth is No. 3 quarterback Andrew Bunch. The 6-foot-1, 215-pound junior joined the Huskers as a walk-on in January of 2017 after spending a year at Scottsdale Community College. Last year, Bunch became just the fifth walk-on in the modern era to start a game at quarterback for Nebraska, joining Matt Turman, Monte Christo, Ron Kellogg III and Ryker Fyfe. Bunch put his name in the NCAA Transfer Portal this winter and visited FCS power South Dakota State and a couple of other smaller schools, but ultimately decided that staying at Nebraska was the best situation for him.

True freshman Luke McCaffrey has really impressed this summer. If the coaches weren’t set on redshirting him, he would be a viable option to unseat Vedral as Martinez’s backup. He’s a remarkable athlete and has really impressed with his mental grasp of the offense. Scott Frost has said McCaffrey’s understanding of the offense is “elite” for his age. Mario Verduzco said McCaffrey scored “lights out” on the annual QB playbook test, scoring as high on the 722-question test as any freshman he’d ever coached. Verduzco is in the process of making some tweaks to his throwing motion and has been pleasantly surprised by how far McCaffrey has come since spring. The tools are there, but with limited snaps at the position, Verduzco will be able to mold McCaffrey. He had not been a full-time starter at quarterback until his senior season. The 6-foot-2, 200-pounder led his Valor Christian (CO) High School to a perfect 14-0 record and a Class 5A state championship before enrolling early this past January and participating in spring ball. McCaffrey, who was ranked as a four-star prospect and the nation’s No. 141 overall player by ESPN, has surprised coaches with how quickly he has developed. He has a very high ceiling. I’ll be interested to see how the coaches use the four-game rule with him.

No team in the Big Ten is sitting in a better situation at quarterback than Nebraska. Adrian Martinez is one of the most ascendant talents in all of college football. No one ever knows how to explain the “it” factor, but everyone knows it when they see it. Everyone that watches Martinez play sees “it.” Scott Frost has made it no secret how excited he is about Martinez’s potential. During a March appearance on the Husker Sports Network he made it perfectly clear; “My hope is that when he leaves Nebraska, he’s thought of as one of the all-time greats at the position,” Frost said in the interview. “In fact, I hope he’s thought of as the greatest to ever play at Nebraska at that position.”

Frost has Martinez for at least two more years, and Vedral and Bunch are above-average No. 2 and No. 3 guys, respectively. What’s encouraging is Verduzco and Frost have continued to add to the room. Early returns are favorable with McCaffrey, and the Huskers already have their 2020 class quarterback committed. Muscle Shoals (AL) High School standout Logan Smothers committed to Nebraska last summer. There are some, me included, who feel the four-star Smothers is the better prospect at this stage of his career than McCaffrey. The present and future are extremely bright at this spot. Position Grade: A