Lincoln – Quarterback Jammal Lord threw for a pair of touchdowns and ran for two more as No. 9/8 (AP/Coaches) Nebraska celebrated its 250th consecutive sellout with a 44-13 victory over Utah State Saturday evening. 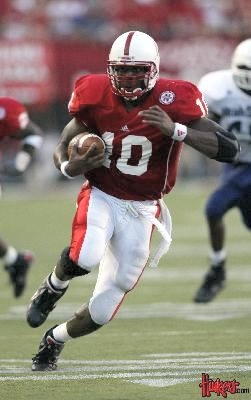 The junior from Bayonne, N.J., led Nebraska to scores on six of its first eight first-half possessions as the Huskers, who improved to 3-0 on the season, raced out to a 37-7 halftime lead and cruised to the win over the Aggies, who dropped to 0-2 on the year.

Lord rushed for 59 yards on nine carries, scoring on runs of one and 28 yards, while completing 6-of-12 passes for 105 yards, including first-half touchdown tosses to Wilson Thomas and Matt Herian.

While Lord guided the Husker offense with efficiency, the Blackshirts were opportunistic, picking off four passes, including a pair by All-America and Thorpe Award candidate DeJuan Groce. The Blackshirts also recorded six sacks in allowing just one touchdown by the Aggies.

After holding Utah State to one first down on its opening drive, the Huskers took possession and went 37 yards on eight plays, setting up Josh Brown’s 44-yard field goal 5:42 into the contest. Brown is now a perfect 4-for-4 on field goal attempts this season, including three from beyond 40 yards.

Nebraska extended the lead to 10-0 on its next possession, as the Husker defense forced a three-and-out, while a penalty on the ensuing punt gave NU the ball at the Utah State 22. The Huskers would cash in four plays later, as fullback Judd Davies plunged in from one yard for his second touchdown of the season.

The Huskers forced another punt before striking quickly for their second touchdown of the quarter, as Lord found Thomas for a 23-yard scoring strike on NU’s first play of the series to give the hosts a 17-point advantage.

Utah State quickly came right back, trimming the Husker lead to 17-7 with 3:19 remaining in the first quarter, as Aggie quarterback Jose Fuentes found Kevin Curtis for a 26-yard touchdown to cap a four-play, 80-yard drive. The scoring toss would be one of the few Aggie highlights in the half, as Utah State gained 126 yards in the first half and committed a pair of turnovers.

Curtis finished with 102 yards on six catches, as Utah State threw for 246 yards, including 159 in the second half, in the loss.

Nebraska built the lead back to 24-7, going 66 yards in five plays, as Lord found a wide open Herian for a 33-yard TD pass on the first play of the second quarter. The catch was the first career reception for the true freshman from Pierce, Neb., and gave NU a 17-point advantage.

Groce, who picked off a pair of passes in the win over Troy State last week, snuffed out the Aggies’ next drive with his third interception of the season, setting up another short Husker touchdown drive.

Behind the punishing running of I-back Dahrran Diedrick, who rushed for 62 yards on eight carries in the first half, the Huskers swiftly moved down the field before Lord’s one-yard keeper gave the Huskers a 31-7 cushion.

Diedrick led the Husker ground attack with 93 yards on 16 carries, as the Huskers rushed for 288 yards in the win.

Lord added his second scoring jaunt of the evening on NU’s subsequent possession, running the option to perfection for a 28-yard scoring run to finish a six-play, 67-yard scoring drive. NU’s extra point attempt failed after a mishandled high snap, but the Huskers still took a 37-7 lead into halftime.

Groce’s second interception of the evening set up the Huskers’ next score, a 13-yard run by redshirt freshman I-back Cory Ross, capping a 36-yard scoring drive, as NU extended the lead to 44-7 late in the third quarter.

Utah State made the score respectable with a pair of fourth-quarter field goals by Dane Kidman.

The Huskers hit the road for the first time next Saturday, when they travel to Penn State for a nationally televised contest against the Nittany Lions. Kickoff for the ABC telecast is set for 7 p.m. (Central).

Quick hits: Kyle Larson’s 71-yard punt in the first quarter was a career long, breaking his previous best of 68 against Oklahoma, and averaged 57.3 yards per punt on four attempts … NU is now 7-0 all-time against Utah State … the win was also the 300th for defensive backs coach George Darlington, who is in his 30th year on the Nebraska coaching staff … NU is 5-0 in the milestone games of the sellout streak and 224-26 during the streak … NU has started the season with a 3-0 record for the sixth straight season … Utah State has lost four in a row dating back to last season … freshman cornerback Fabian Washington missed tonight’s game because he was at his grandmother’s funeral in Florida … With his 93 yards tonight, Diedrick went over the 2,000-yard mark for his career, becoming the 21st Husker to reach that plateau. He now has 2,049 career rushing yards.

The No. 9/8 (AP/Coaches) Nebraska defeated Utah State in Lincoln, 44-13. Nebraska senior All-America candidate DeJuan Groce had two interceptions in the game for the second time this season and the Husker offense scored on five of its first six possessions. NU improves to 3-0, while Utah State drops to 0-2.

The game marked Memorial Stadium’s 250th consecutive sellout and the fans enjoyed a special pregame and halftime ceremony, and fireworks both at halftime and at the end of the game as Nebraska saluted those who died on Sept. 11 and the best fans in America. The win marked Nebraska’s 24th straight home victory (nation’s longest); gave NU a 7-0 edge in the series; and gave Coach Frank Solich his 45th win in five seasons and his 20th win in 22 tries against a non-conference opponent. The win also gave NU secondary coach George Darlington his 300th win as an assistant coach at Nebraska. Darlington joined the Huskers for Tom Osborne’s first year in 1973, assisting Osborne’s teams to 255 wins. With Coach Frank Solich, Darlington has been a part of 45 more wins.