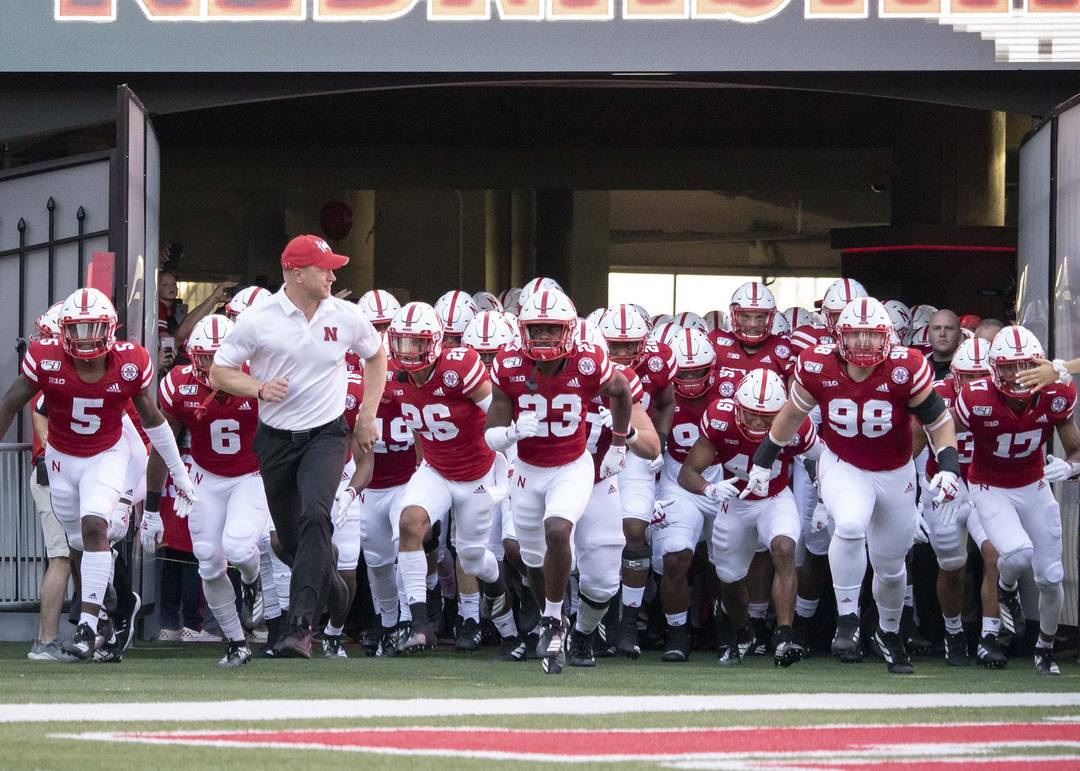 Kenny Larabee, KLIN
Coach Scott Frost leads the team onto the field for the Northern Illinois game.
By Husker Dan on 10/20/2020

As every Husker football fan knows, the start of the 2020 season is just days away. And if that doesn’t get your heart pumping, I don’t know what will. We can almost feel the crowd yelling, “Husker-Power!” and hear the band playing “Hail Varsity” and “There Is No Place Like Nebraska.” And how about the cheerleaders yelling “Go Big Red!” How great is that going to be!

Wait. What’s that? The Big Ten won’t be allowing fans, bands and cheerleaders into the games this fall? No yell squad? No halftime shows? What in the name of Bob Devaney is going on here?

I know what’s going on-it’s COVID 19 and the Big Ten. Both are hurdles that will have to be faced every week and there’s not much anyone can do about it. But, at least there will be a Big Ten football season.

So what can we expect this fall from the league and from the Cornhusker football program?

SOME THINGS TO KEEP IN MIND

1.) PLAYER ELIGIBILITY
Due to the rigid testing standards enacted by the BT as a condition of allowing football to be played, COVID 19 antigen tests must be given several times a week to each player, coach and all support personnel. If a player tests positive, he must sit out a period of 21 days. (14 for quarantining and another 7 to get back into playing shape.) There are also two main testing groups: One for the Team (all the players) and one for the Population (all the coaches and support staff).

2.) CANCELED GAMES?
All BT teams will be COVID 19 tested and rated by a color code (Green, Orange and Red) to determine player and team eligibility. Green is good, Orange is okay. And Red is a no-no.

It won’t be enough for one team to stay in the Green or Orange zone. If one team is eligible, and the other is in the Red zone, the game will have to be canceled. All BT teams will have a 9 game schedule that doesn’t include any bye weeks. Therefore, games that are canceled can not be made up.

And you thought all Scott Frost had to worry about was football.

3.) PENALTIES
If the college football games that have been played thus far are any indication, the Big Ten season is going to be punctuated by penalties and rusty officiating at times. In Nebraska’s case, there will have been 330 days since they last played a football game of any kind.

4.) LONGER GAMES?
And because of penalties and sketchy officiating, it’s a good bet that games are going to be a bit longer this season. And that won’t be good for players and coaches in late November and December when the temps will be bone-chilling.

5.) UPSETS
Look for some upsets along the way. Defending national champs, LSU, lost to Mississippi State and Missouri; Oklahoma lost to Kansas State and Iowa State. Don’t be surprised-especially early on that teams that are heavy underdogs beat teams they shouldn’t.  (Nebraska sure could use an upset this Saturday…)

6.) PLAYOFF GAME
All BT teams will play an 8-game schedule, with another bonus game to be played on December 19th against a team and at a site to be determined.

7.) BOWL ELIGIBLE!
And just when you thought the college football season couldn’t get any weirder this fall, along comes news from the NCAA Division I Council that even before the Huskers open their season, they will be bowl eligible. (This goes for all 127 Division I teams. There are 78 bowl slots available, so even if a team is bowl eligible, it still might not be invited.)

If NU plays its full schedule of 9 games, it might be able to play a total of 10 games if a bowl game is included. And how many people would have thought that possible back in late August?

Look for this to be a trivia question years from now.

Q: What year did Nebraska qualify for a bowl game even before they played their first game of the season?

And a former teammate of Kris’ is Husker QB Eric Crouch, the 2001 Heisman winner. Eric also lives in Omaha. And his son, Carsen, plays for the 4-1 Elkhorn South Storm in Omaha.

So what’s so unusual about that? Well, Kris’ son is the back-up QB for the Warriors while Eric’s son, Carsen, is the starting placekicker for the Storm. (BTW, both are juniors.)

(To be fair, Eric told me recently that Carsen is also the JV QB for the Storm.)

I can’t wait to begin writing about football games, players, coaches and opponents instead of writing about pandemics and inept conference administrators.