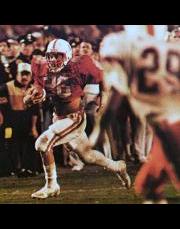 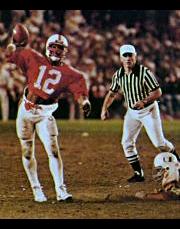 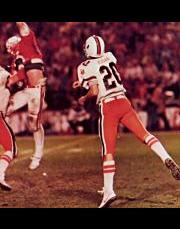 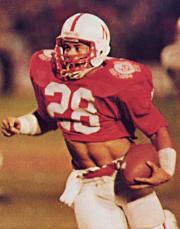 Husker No. 1 Hopes Dashed by Miami

Miami, Fla. (January. 2, 1984) — No. 1-ranked Nebraska's bid for a perfect season and an undisputed national championship came up inches short in the final seconds of the 1984 Orange Bowl game, and upstart Miami climbed to the throne room on the strength of a heart-stopping, 31-30, victory.

With 12,000 Nebraska fans sprinkled among the home-standing horde of Hurricane rooters in the fabled old Orange Bowl, the Huskers and Miami staged the game of the year before 72,549 spectators and a nationwide TV audience.

Twice the pesky Hurricanes—who entered the game ranked No. 4 and a decided underdog to the Cornhuskers, winners of 22 straight games, three Big Eight titles and 12-straight during 1983—buried the favorites.

Twice the host team—Nebraska was the Big Eight entry and, ironically, was hosting Miami on the latter's home field—roared back into contention and almost pulled off the impossible comeback. But a fine Miami team fought off the last-second challenge to preserve a spectacular victory and win the national title in the 50th Orange Bowl game.

Few present that night, either in person or via television, will ever forget the drama as the game for the national championship slowly ticked to its conclusion.

Miami exploded early and effectively via the strong arm of freshman quarterback Bernie Kosar, scoring two TDs and a field goal in the first quarter to embarass the Cornhuskers, billed by some during 1983 as the best team of all time. Miami wasn't buying that one on just hearsay.

With its defense stunned by that first quarter 17-0 onslaught by the Hurricanes, Nebraska went to its bread-and-butter in the second quarter. In this case, bread-and-butter was spelled o-f-f-e-n-s-e, the steamroller unit that led the nation in rushing and scoring throughout 1983. And while Miami wasn't tossing in the towel at halftime after that 17-0 lead had shrunk to 17-14, the Hurricanes might have wondered if perhaps, Nebraska was really as good as its reputation. Thanks to a Dean Steinkuhler (Outland-Lombardi winner) TD run of 19 yards on a "fumble-roosky" play and a Turner Gill plunge, the Huskers were back in business. Would Heisman Trophy winner Mike Rozier unload in the second half and would All-America flanker Irving Fryar swing into high gear?

Credit Miami with not flinching. After Husker Scott Livingston kicked a 34-yard field goal with 1:51 gone in the third quarter to tie it up at 17-17, it looked like clear-sailing for the Huskers.

Unfortunately for the Cornhuskers there was still a lot of wind left in the Hurricane. Touchdown runs by Alonzo Highsmith and Albert Bentley had the Huskers reeling, 31-17, heading into the final quarter. And Nebraska headed into the final 15 minutes without Rozier, who had sprained an ankle midway through the third quarter and retired to the bench in favor of junior Jeff Smith.

Smith, though, played a sensational role in the dramatic fourth quarter. With Gill calmly handling the Husker throttle and the famed offensive line blowing the Hurricanes off the ball, Nebraska launched its second ascension of the night. When Smith scored from the one with 8:05 left, Nebraska trailed, 31-24, and there was still time—if the Huskers somehow could stop Kosar & Co. Somehow they did, ' and Nebraska gained possession as the clock ticked away.

As the crowd roared and stomped, the Huskers drove and with 14:12 gone in the final quarter, Smith took a fourth-and-eight pitchout and tore 24 yards around right end and down the Miami sideline to score.

Thus, the moment of truth arrived for Coach Tom Osborne and his No. 1 Cornhuskers: Miami led 31-30, with a mere 48 seconds left in the game and Nebraska faced a decision of immense proportions. With a PAT kick for a tie, the National Championship was in the bag since No. 2 Texas lost in the Cotton Bowl and No. 3 Auburn struggled with Michigan in the Sugar Bowl. Even with a tie, Nebraska would be 12-0-1, the best mark in the nation.

Or, should the Huskers pull out the stops, disdain the "sure thing" (maybe not so sure, since Miami had blocked a Husker field goal try earlier in the game) and go for the win? Try a two-pointer and either win in glory, or go down with class?

It wasn't even a debatable issue on the Husker sideline—no tie for this team, surely one of the finest ever assembled.

"We never even thought about going for the tie," Osborne said later. "While we were driving, we were thinking of a two-point play. We wanted to win the game and we wanted to win the National Championship as the undefeated, 13-0, team. I wouldn't have been able to look my players in the eye if I had ordered them to kick. We try to teach winning football, not tying football."

When Nebraska came out of the huddle and lined up with Turner Gill under the center, the roar diminished to a hush. The snap, the roll-out, the hurried pass to Jeff Smith in the end zone, Hurricane safety Ken Calhoun coming up to knock the ball away. The gigantic roar of relief as the Hurricane fans and team went wild.

Nebraska had gone for it; Miami had survived, 31-30, and a great football game was over. The next day, Miami vaulted from the No. 4 spot to the top and the gallant Nebraska Cornhuskers were No. 2.

Billed as the national championship game, the Nebraska-Miami match lived up to the buildup in every way.