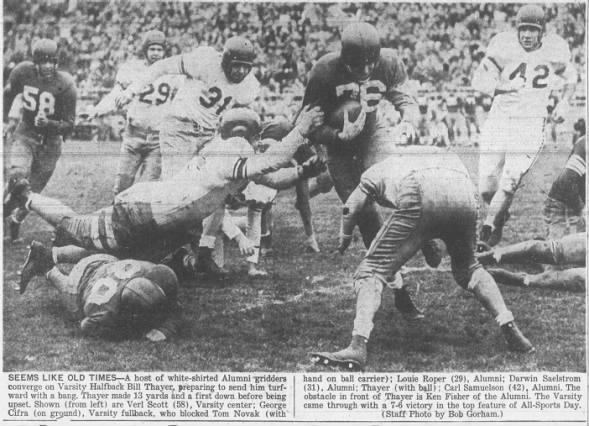 Outdistanced by more than 100 yards in total offense, the Nebraska Varsity eked out a 7-6 spring football game victory over the Alumni by virtue of a missed extra point by the oldtimers and a couple of timely defensive stops.

The Alunmi scored two minutes into the game when Fran Nagle hit Frank Simon with a long pass. The PAT try by Ed Weir, Nebraska's former All-America tackle, failed to clear the crossbar, but he got another chance because of an offside penalty. His second try again was low.

The Varsity, held to 213 yards all afternoon, got a prime opportunity in the second quarter when Ted Connor blocked Dan France's punt. The Varsity moved the ball from the Alumi 37 to the 8 with a series of runs, then got on the board with a pass from John Bordogna to Dennis Emmanuel. Bordogna's extra-point kick was true.

Carl Brasee's interception on the four-yard line ended an Alumi threat late in the second quarter. Another Alumni advance late in the game fizzled at the Varsity 12 when Jerry Ferguson’s field goal attempt failed.