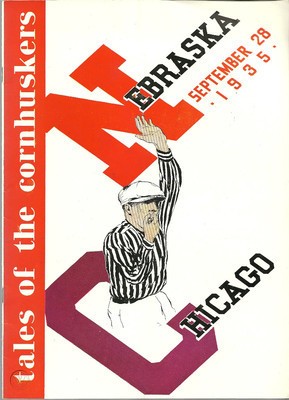 Nebraska’s Lloyd Cardwell outshone Chicago star Jay Berwanger as the Cornhuskers opened the 1935 season with a 28-7 win over the Maroons.

Cardwell, a lanky junior known as the Wild Horse of the Plains, scored three touchdowns. The most thrilling one was an 86-yard kickoff return immediately after Chicago had tied the game at 7-7 in the second quarter. He sped down the left sideline after taking a teammate's lateral, avoided a tackler near the Chicago 20 and went the rest of the way untouched.

Nebraska had scoring drives of 55 yards in the first quarter, 66 yards in the third period and 38 yards in the fourth, with a Sam Francis interception setting up the final touchdown. The Maroons needed to travel just 22 yards for their lone touchdown after recovering a Jerry LaNoue fumble.

Despite the lopsided score, Chicago had the statistical edge at halftime and wasn’t far behind in total yardage at game’s end.

Two promising Chicago possessions came up empty. The Maroons had the ball at the Nebraska 27 in the first quarter, but a wide-open receiver dropped a pass at the NU 8 and the drive fizzled. Chicago advanced to the Nebraska 10 in the final period, but a fourth-down interception by John Richardson snuffed that threat.

Berwanger with the ’35 Heisman

The 1935 Cornhuskers would become known for lateraling anywhere on the field. This play from the Chicago game was diagrammed later by a nationally syndicated artist. The Evening Standard (Uniontown, Pa.) · Newspapers.com