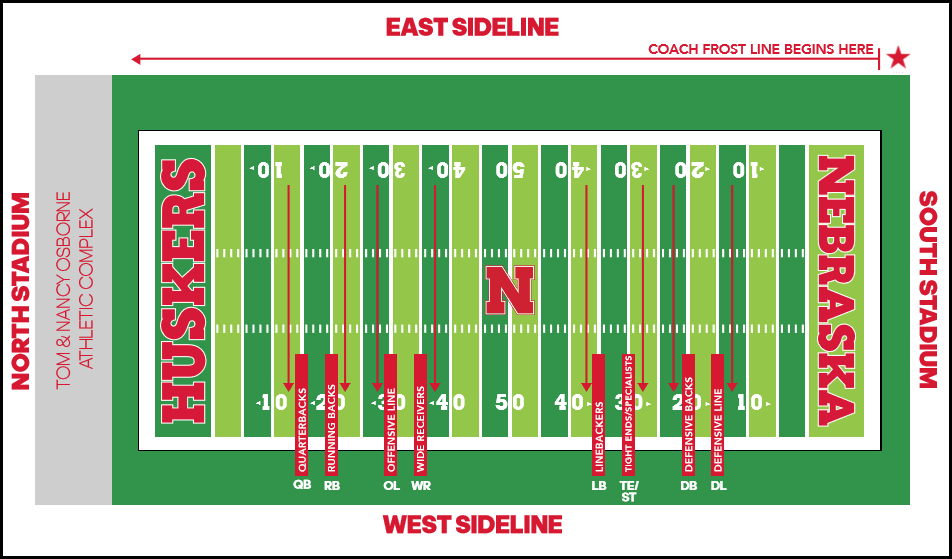 Fans are encouraged to come to Memorial Stadium on Saturday night to meet the 2018 Cornhuskers at Nebraska Football Fan Day from 6:30 to -8:30 p.m. at Memorial Stadium. Fan Day is annually the best opportunity for fans to meet and greet the Nebraska football players, coaches and staff before kickoff.

Fans should be aware of a couple of changes to the traffic flow for autograph lines on Saturday. All players will be seated on the field near the West sideline, with lines running across the field from East to West. Assistant coaches will be seated with their respective position groups.

Coach Frost will be located inside the Osborne Athletic Complex near the weight room. The line for Coach Frost will form on the East apron of Memorial Stadium before entering the North Stadium. Once fans have made it through Coach Frost’s line, they will return to the field through the game-day tunnel walk path.

An event staff member will be stationed near the end of each line to indicate where fans need to line up for a specific line. Event staff members at the end of long lines will also do their best to advise fans on whether or not they will make it through a line during the Fan Day time window.

Fans will be able to enter Memorial Stadium through Gates 3 (SW) and 24 (SE) with gates opening at 6:30 p.m. Autograph cards with a full 2018 roster, a Coach Scott Frost card with a laser-printed signature and 2018 team posters and other items will be available for fans.

Following the completion of Fan Day at 8:30 p.m., fans will be asked to allow players and football staff to leave the field to continue their schedule for the day. Fans may exit through Gates 3, 11, 15 and 24.

Parking will be available for fans in lots on campus around Memorial Stadium for $5.

Fans will have access to restrooms on the ground level, near gates 2, 15 and 24. Other than the Coach Frost signature line, fans will not have access to the Osborne Athletic Complex. Water and Pepsi products will be for sale on the field with two locations along the East sideline.