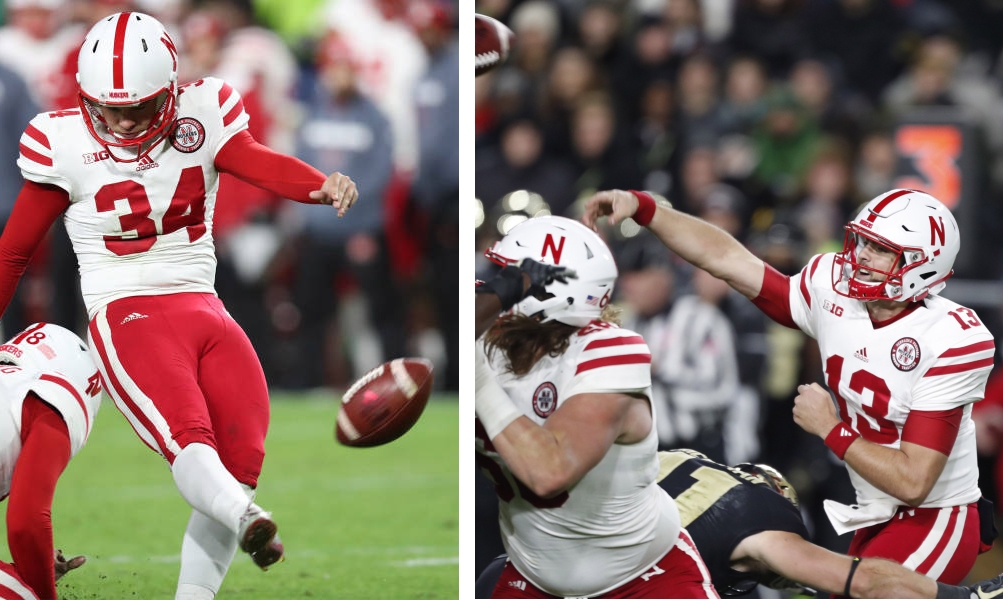 Two members of the Nebraska football team were honored this week for their performances on Saturday against Purdue. Senior place-kicker Drew Brown was one of three Stars of the Week honorees of the Palm Beach County Sports Commission Lou Groza Collegiate Place-Kicker Award, known as college football’s top kicking award, while junior quarterback Tanner Lee was named one of eight Manning Award Stars of the Week.

Brown joins Stanford kicker Jet Toner and UMass kicker Logan Laurent as this week’s “Stars of the Week.” The Award, presented by the Orange Bowl, is named for National Football League Hall of Fame kicker Lou “The Toe” Groza, who played 21 seasons with the Cleveland Browns. Groza won four NFL championships with Cleveland and was named NFL Player of the Year in 1954. Although an All-Pro offensive lineman as well, Groza ushered in the notion that there should be a place on an NFL roster for a kicker. The Lou Groza Award will be presented live as part of the ESPN Home Depot College Football Awards Show in Atlanta, GA on Thursday, December 7. The three finalists will be honored during a celebration in Palm Beach County, culminating with the 26th Annual Lou Groza Collegiate Place-Kicker Award Banquet, presented by the Orange Bowl, on Monday, December 4.

Lee went 32-for-50 and threw for a career-high 431 yards in the victory over Purdue, including a 13-yard game-winning touchdown pass with 14 seconds left. Lee helped the Huskers overcome a 12-point fourth-quarter-deficit and topped the 300-yard passing mark for the second straight game after throwing for 303 yards against Ohio State on Oct. 14. It marked the first time a Nebraska quarterback posted consecutive 300-yard games in conference play since 2008.

The Manning Award, sponsored by the Allstate Sugar Bowl, honors the college football accomplishments of Archie, Peyton and Eli Manning. Lee joins J.T. Barrett (Ohio State), Drew Lock (Missouri), Baker Mayfield (Oklahoma), Steven Montez (Colorado), Khalil Tate (Arizona), Clayton Thorson (Northwestern) and John Wolford (Wake Forest) as this week’s “Stars of the Week.” Fans can now go to the Allstate Sugar Bowl Facebook page to vote for the best performance from this past weekend. Voting closes on Thursday at 11 a.m. (CT) and the top vote-getter will be announced as the Manning Award Quarterback of the Week.