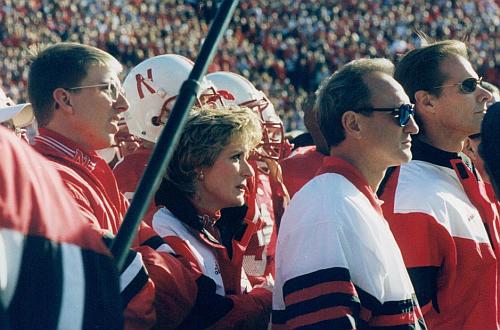 Excerpted from Chapter 33, No Place Like Nebraska: Anatomy of an Era, Vol. 1 by Paul Koch

A (family is a) moving, changing collection of objects constantly in motion… Every individual is growing, changing, developing, or declining – intellectually, emotionally, spiritually, physically, psychologically. No two years, two months, or no two days is there the exact same blend of mix within the family…

-Edith Schaeffer, What is a Family?

“Change is good, but I’d rather have dollar bills.” I’m not sure who first coined the phrase, but who could argue with its logic. My good friend and cohort Curt Thompson of Blair showed up as a walk-on member of the strength staff (much like myself and many, many others) and climbed both vertically and slid horizontally within the program for a number of years, experiencing myriad change every step of the way. He adapted. And he grew. From the Devaney Sports Center weight room to the West Stadium Strength Complex to the South Stadium Football Offices, Curt had a chance to see and work with all the bells & whistles, the nuts and bolts, the legends and louts from every angle. If you want to get a feel for some of the behind-the-scenes action during that era, Curt is your man…

“The second, third, fourth teamers were encouraging the first teamers. They’d want to get ahead so they could go in there and play. And the first teamers? They’d encourage the heck out of the younger guys playing. So there was great team chemistry.”

Question: You were from Blair, Curt?

Curt Thompson: Yes, I joined the strength staff in my sophomore year in college, which would have been the fall of ’88. I worked down at the Bob Devaney Sports Center with Bryan Bailey.

Q: Oh yeah, I think that was my first year over at West Stadium with football…

CT: Yeah, so that created an opening. So I joined on there working under Bailey.

Q: And how did that happen?

CT: Well, in high school I worked at an automobile dealership in Blair called Vinton Motors. Bob Vinton was a Wheel Club member and he provided a car to Boyd, and Bob introduced me to Boyd and kind of opened the door for me.

Q: And you wanted to be a strength coach?

CT: At the time I didn’t, it was more just something to do. I kind of enjoyed it and started out as a business major, and after that first year I switched over and got that degree in Exercise Science.

Q: So bring me back to the first time you met Boyd. Do you recall?

CT: I remember it was back in the old West Stadium, before the new expansion and before what they have today. But meeting Linda Ybarra, she intimidated me that first day.

Q: She intimidated all the new guys!

Q: And you got sent over to the Devaney Sports Center to work under Bryan Bailey…

Very dedicated to athletes. I don’t think you’d find another strength coach in America more dedicated to athletes. And whether it was a guy starting on the team or the 3rd or 4th string player, he was definitely there for the athletes. He was from Arnold, Nebraska. Maybe 5’6” tall, red hair, 145 lbs., just ripped. He’d just eat the craziest stuff. One time he was eating lettuce salad with barbeque sauce on it for dressing, and this was when he had the training table available to him.

Q: I called him the ‘mad scientist’…

CT: Yeah, that’s a good name. Because he would make up the goofiest exercises and he just loved to torture people. He loved to give ’em pain.

Q: You know what’s surprising, Curt? I ask all the players who stood out to them or impacted them most behind the scenes, and a large majority say it was Bryan Bailey.

CT: I can believe that. Even after these guys were in the NFL or NBA they always came back in the offseason and wanted to work with Bailey. Every one of them did.

Q: So you’re over at the Devaney Sports Center working with everybody from gymnasts to swimmers to wrestlers to tracksters to basketball players. When did you move to West Stadium and football?

Q: So you probably wanted to work with football just as badly as everybody else, right?

CT: Yeah, that’s what to expect. And you wanted to work with Boyd, because at that time people were hiring his assistants left and right. Most guys didn’t even have their degrees and people would want to hire them away.

Q: Any recollections of your being thrown into that atmosphere?

CT: It was intimidating. Just the size of that weight room over there at the stadium compared to that little room over at the Devaney Sports Center?  And you used to have maybe 15 guys from the basketball team being in the room, then the sheer number of football players, 190 guys, being in the West Stadium weight room was a bit overwhelming. It was like an assembly line. Like during the season, everybody is in and it’s just crazy for a half hour, 45 minutes… 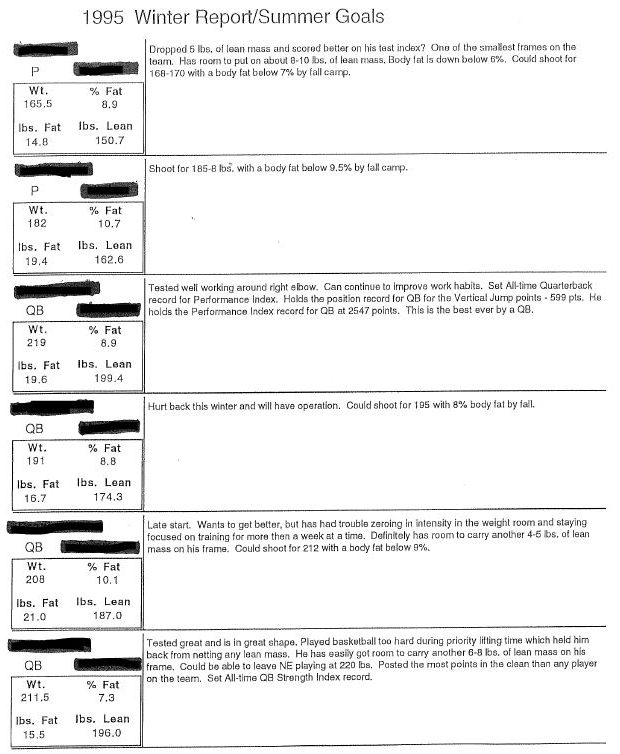 Sample Winter Conditioning QB Report (Nebr. Sports Info)
Q: So you’re part of the strength staff, still a student assistant, still making peanuts, and then it seems Boyd decided there was a niche for you and he kind of had you doing some computer stuff, didn’t he?

CT: Yeah, when they hired me full-time it was Coordinator of Performance Education. That’s when the internet was just becoming popular, so it was starting up the Husker Power website, developing some relationships with high schools, creating programs, I went around the area and gave talks, had different coaches who’d come in and you’d teach them techniques and drills, and then we did this line of Husker Power gear and mail-order workouts.

Q: So when did you get your degree?

CT: It was May of ’92, and in August of ’94 I got a Masters Degree in Education Administration.

Q: And if I recall, you did a study on pre-pubescent strength training, right?

CT: Yeah, I did a paper on that, and then I did my Masters on three different weight programs and how they affected speed, strength, and explosiveness. One was the Metabolic Power Circuit, another was just a regular Monday/Thursday/Tuesday/Friday workout and then maybe an in-season program. I know I’ve got those papers someplace. Some 6-inch three-ring binder. I can’t throw it away, but I haven’t looked at it for 15 years, either. (laughs)

Q: So somewhere along the line you made a move over to the football offices then, didn’t you?

CT: Yeah, during the summer of, it might have been 1996, that summer I got a job offer to go to Colgate out in New York and I told Boyd about it. And he kind of asked me, “What do you want to do? Do you want to be a strength coach or more administration?” At that time I was leaning to do more administration. So Boyd went in to Steve Pederson, who was Director of Football Operations, and they came to an agreement that I would work with the strength staff in the morning and then help out Steve and his assistant Pat Logsdon in the other part of the day.

And at that early time I was doing all sorts of tasks: going through phone records and piddly stuff in the office over there. I was going through phone records and I said, ‘Boy, there’s an awful lot of calls to Pittsburgh.’ And I had over a two-inch stack of phone records that I’d gone through, and I was going to Steve and saying, ‘What are all these Pittsburgh calls?’ (Well, he was talking to Pitt about the athletic director position, and that’s why he needed some help because he was getting ready to move out there.) So I was there at the right time in the right spot.

Q: How long did you work with Pederson?

CT: Oh, probably, maybe four months. Because he might have taken off at the middle of the season or late season. He went to Pitt and they promoted Pat Logsdon, and I kept working for Pat. And then she hired me for her assistant.

Q: Why were you going through phone records in the first place?

CT: Just going through them, the football records, for any numbers that seemed to come up and see if a coach is calling a recruit more than once a week. That’s not allowed. Anything suspicious there …  compliance stuff, self-policing.

Q: Ever run into anything that sent up a red flag?

CT: No, they played very straight.

Q: So you were Assistant to the Director of Football Operations. What happens then?

CT: My main duty was team travel. I didn’t do the contractual part, but getting in contact with the hotel on our away games, getting the contacts for buses to transport us -no airline contracts, the University Business Office did that- the seating assignments on the plane, the room assignments in the hotel, itineraries, which Coach Osborne had final say over.

Q: Did you have a lot of contact with Coach Osborne?

CT: Most of it was with Pat. The football staff had a meeting every day at 7 a.m. and she’d pass things through him. I did have contact with him, not on a daily or a consistent basis, though. I went to a few meetings.

Q: Anything about them stick out?

CT: They were boring. (laughs) A strength staff member, Boyd usually, was always there and they went over who didn’t lift. And Doak was in there to give the injury report, and Pat would do any items she had, so they were only in there for 15 minutes most mornings. I didn’t go to maybe just a handful of them. And other duties I had there was on-campus recruiting, when official visits took place I’d set things up so they could see Academic Counseling, see Boyd, see the Training Staff, have a tour of the locker room, the equipment room, would work with the Cornhusker Hotel on getting the room and checking them in, setting the dinners up or have Misty’s cater meals or getting reservations at restaurants.