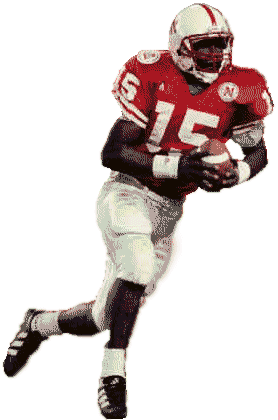 T. Frazier
The Maestro. The Man.
“It was obvious before and it is unmistakable now: Frazier is the heart, soul, baton and megaphone on the nation’s best team.” — Mark Whicker, Orange County Register

“We knew we were going to have a tough time stopping Phillips. But I think we were surprised by the toughness of Frazier.” — Ben Hanks, Florida nickelbacker

“Frazier must now be considered one of the best big-game quarterbacks in college football history — its Joe Montana.” — Tim Layden, Sports Illustrated

“Three misconceptions went to dust in the desert … Tommie Frazier is not the best college player in the nation. Actually, Ohio State’s Eddie George got the Heisman Trophy, then damaged it in airport security. Maybe the little man on the trophy was just struggling to go to his master.” — Mark Whicker, Orange County Register

“The thing that Tommie brings to the game more than anybody else is a presence and a confidence and a competitiveness and an intelligence that very few players have.” — NU coach Tom Osborne

The great transformation
In October 1992, NU was mired in a nearly four-year-old slump during which it had not beaten a single Top 10 opponent and had won only once against a Top 20 foe. Then, an 18-year-old named Tommie Frazier took over at QB. Just a week later, the Top 10 drought was over, and before you knew it, Nebraska was a team that delivered in the big game. Sure, Frazier was just one of the contributors to the turnaround, but he seemed to show everyone else the way.

Here is how the Huskers and Frazier did games against AP-ranked teams after Frazier became the starter: