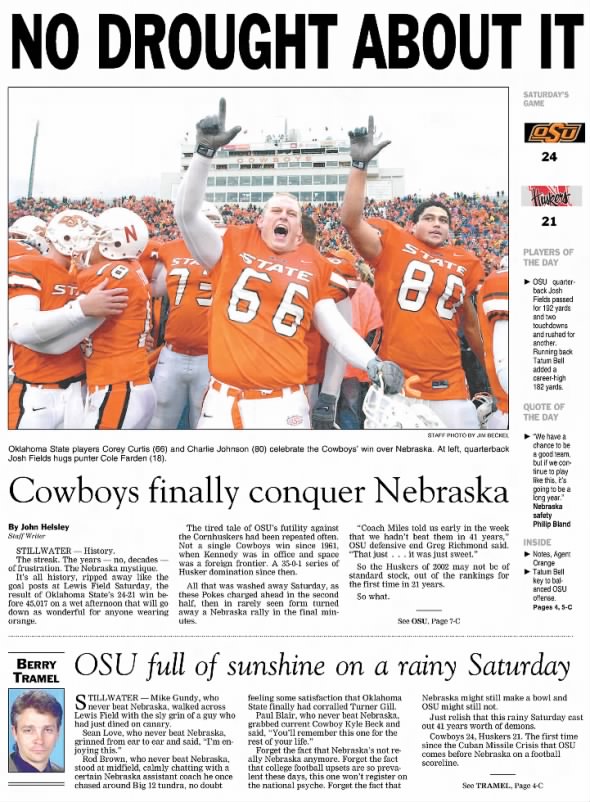 NEBRASKA 24, MISSOURI 13 MU starts fast but can’t close the deal vs. Cornhuskers 13-7 lead dissolves as offense disappears in the second half By Bill Coats Of the Post-Dispatch LINCOLN, Neb. Things were unfolding just the way Missouri wanted. It was controlling the ball, had gained nearly twice as many yards as Nebraska and held a three-point lead. Trouble was, three quarters still remained Saturday at Memorial Stadium, which was filled to the brim with 78,014 fans. And during that span, the Cornhuskers wrested away command and sent the mistake-prone Tigers packing. Again. “I’m sad that I had to lose to Nebraska four straight years. It just hurts,” MU senior receiver Justin Gage said after the ‘Huskers ground out a 24-13 victory, their 24th win in a row over Missouri since 1978. See Missouri, D7 iJ J .. 2ZJb i ,w. . v J c I KEIXI KELLOGG THE ASSOCIATED PRESS Nebraska comerback DeJuan Groce fleft) breaks up a pass intended for Justin Gage in the first quarter Saturday.

Nebraska’s Philip Biand (21) and Ryon Bingham bring down Mizzou QB Brad Smith, who found little room to make plays all afternoon. Cornhuskers bottle up Smith MU quarterback held to 157 total yards By Bill Coats Of the Post-Dispatch LINCOLN, Neb. Nebraska tugged on Superman’s cape Saturday. And he fell from the sky. “I’m not particularly sure what they did,” Missouri quarterback Brad Smith said. “But I know they were making plays. Sometimes it seemed like they had guys everywhere, covering everything and just rushing. They did a great job.”