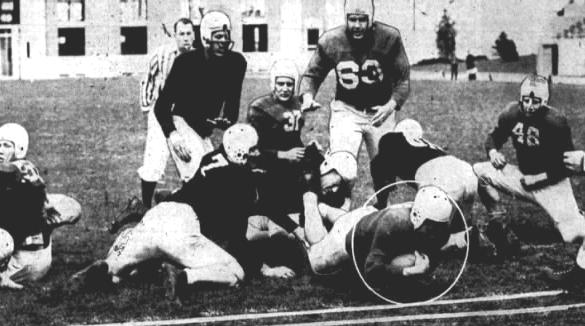 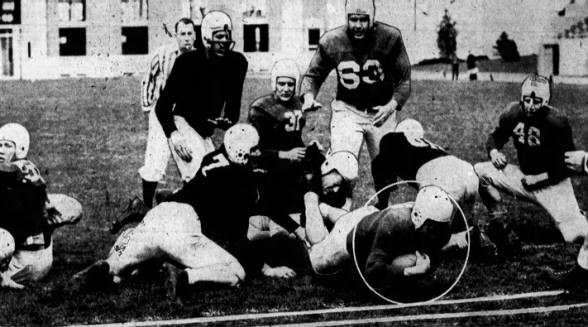 Our year-by-year rundown starts with the 1940s. The ’30s and ’20s will be covered in the coming days. All games were played at Memorial Stadium unless noted otherwise.

1941.04.09 (WED): The Yales won an evenly matched contest on muddy turf against the Harvards, 26-20. The winning points came on a 20-yard pass from Howard Debus to Ernie Weekes after the game had been turned over to the squads’ No. 2 units. Al Zikmund was a standout performer for the Yales, as was Dale Bradley for the Harvards.  •  LS  •  LJ

1943: Spring drills dwindled to 10 or fewer players as football took a back seat to the war. Coaches were pulling double duty as P.E. instructors for the military. Practices consisted of touch football and conditioning. Due to the player shortage, an intra-squad game was out of the question, and a proposed spring game against Missouri didn’t pan out.

1944: Wartime realities continued to take their toll as fewer than 20 players reported for the first day of spring drills on April 5. Practices included no scrimmaging and were finished by the end of the month, though voluntary workouts continued for another two weeks.

1945: Twenty players reported on April 9 for the start of spring drills, which were “informal practice sessions” that would run through the first week of May.

1946.04.19 (FRI): The Whites edged the Reds, 7-6, in a game the Lincoln Journal called “a rather sad affair” featuring “shabby tackling and missed blocks” in sweltering heat. The World-Herald’s Gregg McBride said the Huskers’ passing was “miserable” and the ball carriers generally “lacked speed and punch.”  •  LJ  •  LS  •  Previews: 1, 2

1947.05.02 (FRI): Cletus Fischer returned a punt 90 yards for one of his two touchdowns in the Blues’ 21-6 win over the Reds. The World-Herald reported that Fischer fielded Jack Pesek’s punt on the first hop and “rammed straight through the Red team as though jet-propelled.”  •  LS  •  LJ  •  DN  •  Preview

1948.05.01 (SAT): Ken Fischer passed for two touchdowns and his brother Cletus scored two of his own as the Blues clobbered the undermanned Reds, 38-7. Among those in attendance was Nebraska Gov. Val Peterson, who gave a short talk to the players.  •  LJS  •  DN  •  Previews: 1, 2

1949.04.13 (WED): The Whites scored during extra time in the fourth quarter and defeated the Reds, 13-6. The Omaha World-Herald observed: “Most of the action was rugged combat between the two lines, with the defense looking better than the offense.” An estimated 1,500 fans attended the game, played on the freshman field between the Field House and Coliseum while a track meet took place in Memorial Stadium.  •  LJ  •  LS  •  DN  •  Preview