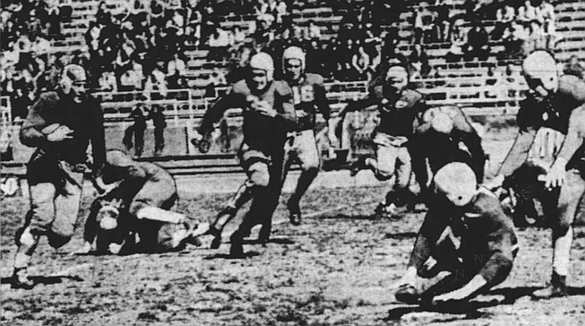 Our year-by-year rundown started with the 1940s. Below are the ’30s, and the final installment will cover the ’20s. All games were played at Memorial Stadium unless noted otherwise.

1930.04.05 (SAT): Red Young and Harold Frahm scored touchdowns as the Reds shut out the Blues, 12-0. (The State Journal referred to the teams as the Panthers and Bears.) Sportswriter Gregg McBride said the Huskers displayed “smooth working offense in spite of a stiff wind that blew away all hopes for aerial play.”  •  LS  •  LJ  •  DN

1931.04.11 (SAT): All the scoring came in the fourth quarter as the Varsity downed the Freshmen, 14-6. The first touchdown came on a 60-yard interception return by Herman Witt, a Varsity substitute guard. Each team then had a short TD drive of about 20 yards — the Varsity’s set up by freshman George Sauer’s poor punt, and the Freshmen’s set up by Sauer’s 41-yard interception return.  •  LS  •  LJ  •  DN  •  Preview

1934.04.12 (THU): A Blues team consisting largely of freshmen upset the Reds, 6-0, by bolting for 77 yards in the final half-minute of the first half. The touchdown came on a pass of about 40 yards from Henry Bauer to Lloyd Cardwell. According to the Daily Nebraskan, the Reds managed just three first downs.  •  LS  •  LJ  •  Preview

1936.04.04 (SAT): The Reds dominated, scoring six touchdowns in a three-way game with the Whites and Blues. Neither the World-Herald nor the Journal & Star gave a score, probably because of the rotation between Reds vs. Whites, Reds vs. Blues, and Whites vs. Blues. The Daily Nebraskan gave a score of Reds 44, Whites 0, even though some of those 44 points were given up by the Blues and/or scored by the Whites.

1937.04.17 (SAT): Is it a true spring game if fans can’t attend? A 60-yard touchdown gallop by John Howell was the highlight as the Reds hammered the Greens, 26-0, “behind closed gates” at Memorial Stadium. The Daily Nebraskan said first-year coach Biff Jones wanted an “unscouted” contest.

1938: The scheduled game of Saturday, April 16, was canceled because of a swampy field. Players instead practiced inside East Stadium for two hours.