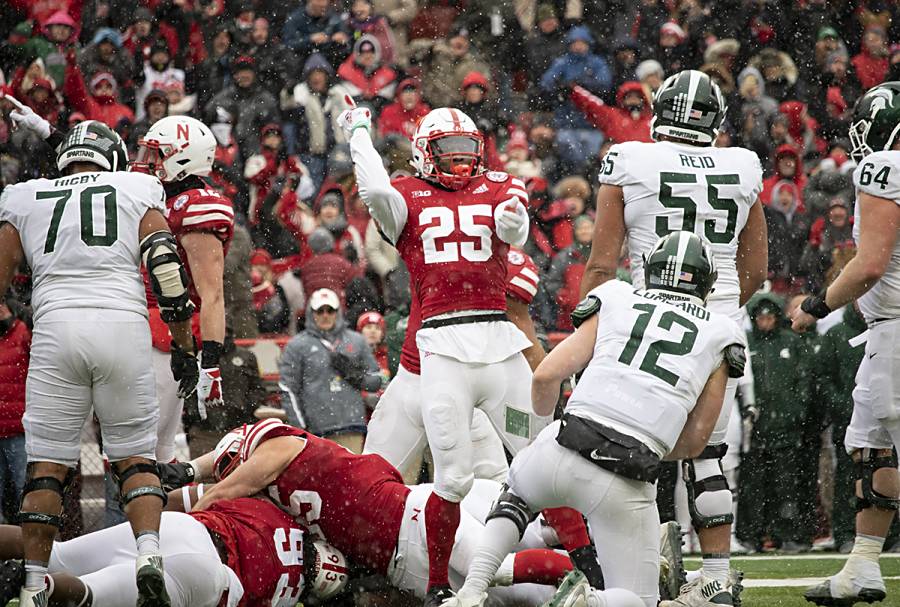 Kenny Larabee, KLIN
Antonio Reed celebrates after forcing a fumble in the fourth quarter.
By Tad Stryker on 11/17/2018

Scott Frost did a decent enough job of adjusting to the Big Ten Saturday — just enough to enjoy a celebration run through the snow to the locker room with a Senior Day victory.

There was plenty of adjusting to be done. Playing against the nation’s top run defense can humble even a high-powered offense, and Michigan State slowed the Huskers to a crawl at times. So defensive coordinator Erik Chinander called on the Blackshirts to do something they haven’t done for a long time — go out and win a game.

About half as much offensive production as usual? More than half the student section AWOL? No problem, the Huskers just kept battling while keeping their composure on a cold, chippy afternoon that saw four unsportsmanlike conduct penalty flags fly — three against the visitors from East Lansing. This is the kind of game generally won by the team with the better defense and the more experienced coaching staff, but NU matched the Spartans blow for blow and committed only five penalties during one of those stern, gray, old-school days that remind you why Nebraska will always need a dependable running game.

Frost Ball was shelved by a dynamic Michigan State defense, a 20-mph north wind and single-digit wind chill. But Nebraska’s defense answered, stood up and took a bow. Led by a pair of senior Southerners, Tre Neal and Antonio Reed, Nebraska proved it can win a November slog in the Big Ten.

On a day where Adrian Martinez looked ordinary and touchdowns were nonexistent, it was a fired-up defense, a rock-solid effort in the kicking game and a scaled-down-but-mighty home crowd that brought home the victory. Three field goals by freshman Barret Pickering accounted for all the Husker scoring.

The 9-6 triumph — Nebraska’s first victory without a touchdown since the Great Depression — secured Nebraska a winning home record in 2018 — one of many small blocks that needed to be laid into the foundation of a large-scale rebuilding effort.

On the day he was announced as Nebraska’s coach last December, Frost famously proclaimed that he hoped to “make the Big Ten adjust to us.” That process is still in progress. A school-record seven consecutive games with at least 450 total yards came to an end.The Huskers’ offensive struggles proved there is more tuning to be done on an offense that shows plenty of promise.

Nebraska improved to 9-2 all time against Michigan State and 6-1 in Lincoln, but this wasn’t at all like the 39-38 thriller in 2015. This was a game played very much to the specifications of the team which likes to lean on its defense. The Huskers won just the sort of cold-weather slugfest that the Spartans wanted.

It was a day of restitution for senior safety Antonio Reed, whose untimely fourth-down personal foul against Colorado set up the Buffaloes’ last-minute season-opening win and was the symbolic newsreel moment that got Nebraska’s season off to a stumbling start. Reed was stellar in his final home appearance. He played with controlled vengeance, collecting a season-high seven tackles, made an interception, broke up two other passes, forced two fumbles, and had a career-high three tackles for loss, including a devastating strip sack of Michigan State freshman Rocky Lombardi, recovered by Texan redshirt freshman Damian Daniels that set up Pickering’s game-tying second field goal.

Neal followed Frost to Lincoln from UCF as a graduate transfer and helped teach Chinander’s defense to his new teammates as a second coach on the field. He got it done on the field Saturday, with three tackles, three passes defended and seemed to breathe fire from his free safety position for much of the frigid afternoon. He pumped energy into his teammates and slammed the door on the Spartans, making two huge hits on Michigan State’s final drive and knocking down Lombardi’s fourth-and-4 pass from the Husker 29-yard line that ended the visitors’ final drive.

Pickering fed off the mental toughness that’s steadily growing in Lincoln. The Alabama native struggled at times earlier this season, but he earned his scholarship by nailing three field goals in lousy weather conditions. Pickering has made 12 of 16 field goal attempts this season after hitting from 36, 20 and 47 yards. On his first kick of the day, he eclipsed his career best, then did it again with 5:13 left in the fourth quarter to provide the winning margin while a swirling tailwind hurled snow flurries around him.

What little offense Nebraska mustered came mainly from Devine Ozigbo and Stanley Morgan, who both achieved career milestones. Ozigbo carried 18 times for 74 yards as he became Nebraska’s first 1,000-yard rusher since Ameer Abdullah in 2014. With less than two minutes remaining, he punched out a pair of decisive runs to get a first down and kill the clock. Morgan caught four passes to raise his career total to 182, eclipsing Kenny Bell’s record of 181. Martinez completed just 16 of 37 passes for 145 yards (3.9 yards per attempt) as Frost shied away from the running game for much of the day, getting just 103 yards on the ground.

Martinez never looked comfortable; credit much of that to the Spartan defense. He lost a fumble and could never get get upfield against MSU’s quick, hard-hitting linebackers. The Spartan defensive front outplayed Nebraska’s offensive line much of the day, so when Martinez overthrew a wide open Morgan at the 5-yard line on fourth-and-8 from the Spartan 33-yard line with 6:54 left in the second quarter. it loomed large as Nebraska went the the locker room trailing 3-0.

But the Blackshirts had plenty left in the tank. They never gave Michigan State’s injury-depleted offense much breathing room, and they held the Spartans to a field goal early in the fourth quarter when Mohamed Barry pressured Lombardi on a second-down pass that glanced off the hands of sophomore tight end Matt Dotson in the back of the end zone and, one play later, on third-and-goal from the 8, senior Luke Gifford teamed with Carlos Davis to tackle MSU running back Connor Hayward at the line of scrimmage. It was the Spartans’ last decent scoring opportunity.

Ugly wins trump pretty losses any day for Nebraska (4-7, 3-5 Big Ten), which gets one more chance to build on its strong finish to Frost’s first season when it travels to Iowa on Black Friday. With no bowl game possible, Frost and his staff will get one last chance to gather data on a classic Big Ten opponent that likes to line up in heavy sets and run power football with play-action passes. To win the Big Ten West in coming years, Nebraska will have to succeed against teams that like to slog it out at the line of scrimmage. Just who will need to adjust to whom?