Stryker: With hand tied behind back, NU youth movement strikes blow against Rutgers 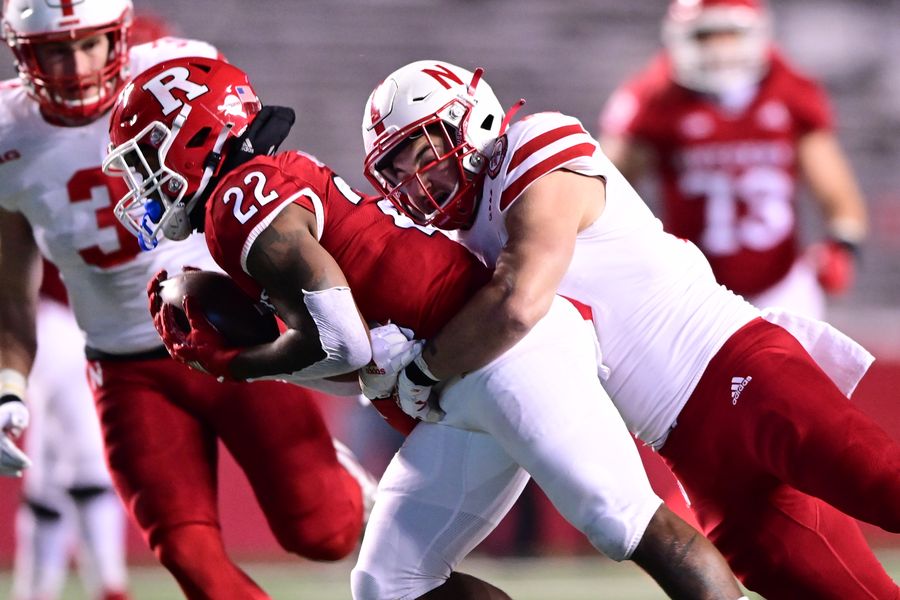 Ben Solomon
The Husker defense made things tough for Rutgers all night.
By Tad Stryker on 12/19/2020

I wasn’t privy to the pregame conversation between head coaches Scott Frost and Greg Schiano, but judging by the way the game went, I think it happened something like this:

Schiano: “Yo, Scott! You up for a one-mile race?

Schiano: “But you have to run with one shoe off, drag a 20-pound weight all the way, and give me a quarter-mile headstart.”

The Big Ten office stuck its middle finger in Nebraska’s face, sending the Cornhuskers to Piscataway, N.J., for a fifth road trip in eight games. But to its credit, Nebraska rose to the challenge. The Huskers didn’t miss four-year starter Brenden Jaimes, who opted out to prepare for the NFL Draft. In fact, it may have been the best thing that happened to the Big Red all month. The offensive line looked reborn with the insertion of true freshman Turner Corcoran at left tackle, and responded by shoving the ball down the throat of Schiano’s defense.

More importantly, the Blackshirt defense bailed out Frost, spotting Rutgers a 50-yard pass on the opening series, then playing tough the rest of the way. Nebraska’s defense yielded just 202 total yards and 11 points after the Scarlet Knights’ opening drive.

With a hard-fought 28-21 win over Rutgers Friday night in cold, snowy New Jersey, Nebraska avoided the title of the Big Ten’s worst team of 2020, finishing the league schedule at 3-5 to Rutgers’ 3-6. They did it despite going minus-three in turnovers, despite awful special teams play that gave Rutgers the ball at midfield most of the night, and finally surrendering a kickoff return for a touchdown. Yes, NU put together three 90-yard touchdown drives and won a Big Ten game without using the Big Ten formula. But do you really want to do it that way all the time? Talk about playing with a handicap.

Is this what Frost envisioned when he said he wanted to make the Big Ten adjust to him? I don’t think so. As they so often do, the Cornhuskers elevated inefficiency to an art form, committing four turnovers (all by Adrian Martinez) and nine penalties, and capped it off with horrible special teams play.

Nebraska doubled down on shooting itself in the foot, then atoned for its errors by doubling down on running the football, shredding an exhausted Rutgers defense for more than 250 second-half rushing yards on 35 second-half running plays. To his credit, Frost didn’t try to get fancy. He wised up and rode his heavily-burdened workhorse all the way to the end of this crazy COVID-ravaged season.

Frost and offensive line coach Greg Austin could have used five returning starters in the offensive line all season. They opted to start redshirt freshman left guard Ethan Piper and redshirt freshman right tackle Bryce Benhart all year long. Adding a third freshman could have gone bad, but Corcoran looked like he belonged in his first start. The Huskers played Trent Hixon, one of last year’s starters, at left guard for almost half the game, then brought back Piper to finish it. Sophomore center Cam Jurgens was nearly problem-free at center, which makes a big difference in the Husker attack, and senior Matt Farniok, who switched from right tackle to right guard this season, had one of his better games to finish his Husker career.

As a unit, the o-line, which has been the most disappointing part of the 2020 Husker team, came together for one night and looked like it was playing to save Austin’s job. They might have gotten it done. Hopefully, Austin will be judged on his overall 2020 output and not just on this game. The offensive line should be improved next year, but then again, I’ve thought that the last couple of seasons and it hasn’t happened. The lack of consistent o-line development is a real concern. And nobody’s going to mistake Rutgers for a top-division team anytime soon, but the o-line youth movement provides hope.

Yes, this result gives Nebraska a few things to build on. For one game at least, Frost didn’t get cute. He kept running the ball right at Rutgers, turning loose a finally-healthy Dedrick Mills, who ran 25 times for 191 yards, a lot of them coming between the tackles. Mills seemed to be out of shape after missing much of the season, but he kept answering the call. He had runs of 43 and 50 yards and a lot of four- and five-yarders that slammed the door on the Knights.

Wan’Dale Robinson finally scored a touchdown. In fact, he got two. It’s hard to believe that didn’t happen earlier this fall.

The Huskers finally scored a second-half touchdown. In fact, they got three. Watching the Big Red get stronger as the game goes along is something that fans of a certain age remember very well. They just haven’t seen it much lately. Did you notice a lot of opposing defenders limping off the field with injuries? That used to happen in Husker games a lot, too.

Meanwhile, at quarterback, Martinez battled his usual demons all night long and finally wrestled them to the ground. At halftime, with Nebraska trailing 14-7, he had 176 total yards, three turnovers and no touchdowns. Two plays late in the second quarter — a beautifully thrown 38-yard touch pass to Robinson, followed by a devastating end zone interception on a pass that had no prayer of being completed — are a microcosm of the California native’s last two seasons. Martinez has a way of making gunslinger Tommy Armstrong Jr. look like a careful, dependable game manager. The Huskers will never be a consistent winner with an erratic Martinez at the helm. But on this night, he channeled Armstrong’s warrior mentality, and kept coming back to hit Rutgers with big plays. Despite throwing one last interception, Martinez kept the offense moving throughout the second half. He finished with 412 yards of total offense, completing 24 of 28 passes and one touchdown. After the game, Frost told a BTN reporter that Martinez was “beat up,” while Luke McCaffrey was unavailable and watched the game in street clothes from the sidelines.

At the half, the addiction-ridden Nebraska offense was doing what it has done much of the last two seasons — relapsing to its old habits whenever the pressure comes. The Huskers had 255 yards, three turnovers, seven penalties and only seven points over the first 30 minutes. Then, just when Nebraska seemed on the verge of botching another winnable game, the change came.

The change could never have come if the Blackshirts had not held firm.

It’s too bad that Noah Vedral couldn’t play for Rutgers. Then again, it’s also too bad that Omar Manning never saw the field for the Huskers in November and December. I think Vedral would have had a tough time moving the Scarlet Knight offense against the Blackshirts, who kept Nebraska in the game despite defending a short field time and time again, and held tough until the Rutgers defense ran out of gas.

The Nebraska defense had to overcome four turnovers, plus a fake punt for a first down, which essentially was a fifth turnover. And did I mention that Nebraska’s special teams were awful? Again? I wonder if Frost could trade an unproductive quarterback coach for a special-teams coach.

You know you’ve got special teams issues when your own play-by-play announcer is openly campaigning for you to simply have Connor Culp boot the ball out of bounds on kickoffs, as the Nebraska Sports Network’s Greg Sharpe did. To call the Husker kickoff coverage horrific is far too kind. Add a holding penalty on an extra point attempt, and the usual anemic kickoff return game, and you have a serious field position advantage for the Husker defense to overcome. On this night, they were up to it. With Luke Reimer, the Huskers’ best linebacker, unavailable, freshman Nick Henrich stepped in and led the Huskers with 12 tackles. The Huskers made eight tackles for loss and had a pair of sacks from their outside linebackers, something I don’t recall happening in the past three years.

Cam Taylor-Britt grabbed his team a long-overdue takeaway, intercepting a pass in the fourth quarter.

The Huskers’ second-half surge was a refreshing change.Their 365 yards rushing were the most by a Nebraska team since Frost’s win over Minnesota in 2018, which will make this winter feel a little better, as will the Huskers’ 86-52 advantage in plays from scrimmage and 39 minutes of possession time.

Corcoran, who became the first Nebraska freshman ever to start at left tackle, already looks he could become the Huskers’ best offensive lineman, at least in a run-oriented game. And when I think about Martinez’s touchdown pass-to-interception ratio, I see no reason why Frost shouldn’t stick with a run-oriented offense in 2021. It could remove a huge ball and chain from the Husker offense, give them at least a fighting chance in field position wars and eventually set them up to compete for a division championship.