Stryker: With adults in charge in Lincoln, hope for football persists 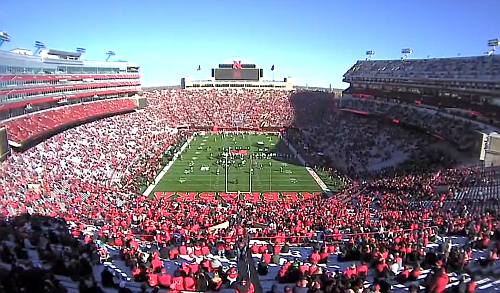 Nebraska administrators, football coaches and players have been remarkably steady, effective and responsible throughout the Covid-19 pandemic and the concurrent racial unrest, one of the most volatile and confounding stretches in American history, and it culminated in an admirable media showing by coach Scott Frost and three of his players on Aug. 10.

The Cornhuskers are galvanizing into a stronger, better program from top to bottom. The players show indications of increased unity and more talent. If they get the chance to play this fall, they will show it on the field. Unfortunately, they may not get that chance, but if they don’t, it won’t be for lack of trying. Frost, along with quarterback Adrian Martinez, defensive back Dicaprio Bootle and offensive lineman Matt Farniok, made that very clear.

Their argument for moving ahead with the fall football season is compelling, and the way they’ve walked the walk over the previous several months gives their words much more power. If Big Ten presidents were listening, you get the feeling there’s a decent chance that the recently retooled conference-only schedule might actually play out on the field this fall. Frost made it clear that would be the best possible outcome. He also made it clear that NU president Ted Carter, chancellor Ronnie Green, athletic director Bill Moos and Frost are prepared to seek an alternative schedule if the B1G presidents bow to their lawyers and pull the plug on the season, as has been widely anticipated by many national outlets.

Nebraska football players have been on campus, working out since early June. Until the last couple of weeks, they’ve had very little time with coaches, outside of the strength and conditioning staff, and that fact that it has gone so smoothly is a hopeful sign of long-awaited Husker upperclassman leadership. With national media trumpeting fearful headlines about Covid-19 spread, and largely ignoring success stories, the Huskers have been focused on football. Flying under the radar, I suppose, is the best possible outcome they could have achieved. Players and coaches deserve praise for their measured, proactive response to a wild set of changing circumstances during a year when the popular tactic is pointing fingers and spreading blame. Theirs is not the only such success story, not by a long shot, but their example deserves the limelight.

Frost and his staff have been seeking good advice and taking it. Having access to the NU Medical Center has been nothing but helpful, and thus far, they’ve used appropriate medical information to steer a successful path through the perplexing pandemic.

Husker players obviously support the NU administration’s efforts to handle the coronavirus. At least a dozen of them, including Martinez (“Nebraska has done a great job of doing things the right way and has protected us players. We’ll find a way to play here!”) and defensive lineman Damion Daniels (“Shout out to the University of Nebraska for making sure OUR safety comes first. Let’s get to it !!!”) were outspoken on Twitter over the weekend. Nebraska’s policy is not to name names when individual positive cases happen. That could be construed as trying to sweep bad news under the rug, I suppose, but if that were happening, players would start to leave the program and most likely, bad-talk it on the way out. Several players have predictably left because of lack of playing time, and JD Spielman left for reasons that may never be fully known, but nobody appears to be leaving in a dispute over the virus issue.

Earlier this month, national media gave a lot of attention to a lengthy list of demands made by a group of Pac-12 athletes, ranging from specific Covid-19 protocols and medical coverage to general calls for an end to racial injustice to a 50/50 revenue-sharing plan for college football that would almost guarantee the shutdown of many non-revenue sports nationwide (even if the 2020 football season could somehow be played in front of relatively large crowds, which seems almost impossible at this point). The Big Ten has avoided that messy look thus far; a “Big Ten United” players’ proposal wisely avoided the ridiculous revenue sharing demands, while including many of the same safety and health proposals, which definitely need to be addressed.

Frost and his staff have gotten some bad breaks over the last couple of years. They’ve made their share of blunders, also. It might be tempting to look at Covid-19 as another bad break, but that’s not the sense I get from North Stadium. They have not retreated from the virus. They’ve been innovative in the way they brought players back to campus in small groups, and in the way they’ve started workouts. There’s reason to believe their courageous, hopeful, thoughtful, science-based approach will pay off in fall camp and the most unusual football season in our lifetimes. Yeah, they’ve got me thinking the season might still actually happen. If so, then, it’s “prove-it” time for Frost and his staff. Time to show that they can develop players and win games on the field as well as they can win press conferences.

I think good things will happen in Lincoln, where leadership has earned the praise of players for their accountability and their concern for the players’ welfare. And now they’ve gotten it right on ticket policy for the upcoming season. The Husker brain trust cares about its players and its fans, which is Job 1 for any college athletics program.

Moos — as he should — is trying to convince ticket holders to donate their 2020 payment outright, or roll over their payments for the 2021 season tickets, but he decided to offer season ticket holders the opportunity to get a full refund for the 2020 season if they have misgivings about attending during the pandemic, yet retain the option to keep their tickets in 2021. That’s much more generous policy than what Penn State recently decided. The fact that NU had more than $50 million in a reserve fund probably helped with that decision.

It’s almost as if Nebraska coaches and administrators are thinking rationally and planning, instead of simply reacting. Husker coaches and administrators are acting like adults who care enough about the welfare of their players to go to bat for them even when it’s risky, and they’re operating from hope and reason instead of panic and fear. That’s not exclusive to Nebraska, but it’s unusual enough to be refreshing here in this insane year of 2020.