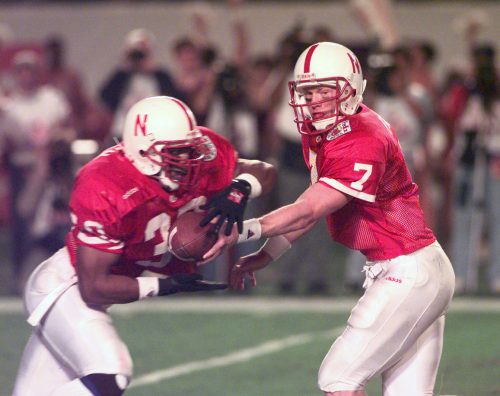 Courtesy Lincoln Journal Star
Scott Frost is working to restore Nebraska to the toughness he exemplified as a player.
By Tad Stryker on 5/23/2019

I recently watched BTN’s “Big Ten Elite” football retrospective honoring the 1997 Nebraska team. The director did a good job playing up the strongest story lines — Tom Osborne’s final season, the Blackshirt dominance of Grant Wistrom and Jason Peter, the rise of linebacker-mentality quarterback Scott Frost. It was at least as good as the network’s piece on the 1997 Michigan team (released several years ago). BTN is walking a fine line on that generation-old shared-national-title argument, as it must. In the process, it has given Nebraska a lot more esteem based on its past reputation than the Cornhuskers have earned as an eight-year member of the Big Ten.

The respect shown for the 1997 team, of course, is legitimate; make no mistake about that. For Husker fans over age 30, the retrospective is a glorious walk down memory lane. It’s also a grim reminder of The Slide. You can’t watch the show without thinking about how far the program has slipped and the main reasons — a catastrophic decline of leadership at the top, which quickly led to a lack of physical and mental toughness, which eroded player leadership in the locker room and on the field, which in turn dramatically lowered the expectations of pretty much everyone except the fan base.

A generation later, Nebraska football is not highly regarded nationwide. This time of year, the annual college football magazines are evidence. It’s been doggone hard lately to find a Cornhusker on the cover of anything. That’s no surprise; right now, Nebraska is not Nebraska. In fact, much of BTN’s younger audience — except perhaps for Wolverines who still hold a grudge against Osborne and Frost passed down from their fathers — probably will yawn and change the channel when they see the new show’s title, and I don’t blame them. Nebraska’s past reputation is much better than its recent one, and nobody’s going to repair that but Nebraska.

The renovation is underway. Upon returning as head coach, Frost laid significant groundwork in Year One. Year Two will be a season of recovery, as the Huskers start to noticably rejuvenate their reputation. But for the moment, it’s not important whether anyone outside the state buys in. In some respects, it’s better to stay under the radar until reality hits the Big Ten in full force. Let football fans nationwide smirk and point at Nebraska’s dismal 8-16 record over the two years. Let them enjoy it while they still can.

I was surprised to see Athlon and Street & Smith pick the Huskers to win the Big Ten West. I think the potential is there, if they develop a dependable center and at least one stouthearted inside linebacker to play all year beside Mohamed Barry, but frankly, I’m glad to hear that Wisconsin fans are pushing back against those magazines. Until Nebraska lines up and beats Wisconsin, the Badgers deserve to brag all they want. Same with Iowa — let ’em yap until the Husker offensive line starts pushing the Hawkeye d-line around. Same with Northwestern. Nebraska has gone 1-11 against that triumvirate since 2015. That must change before anything else changes, and this year, all three are home games — one early in October, two late in November.

Nebraska owes Colorado a decisive response to the Buffs’ ankle-twisting win in Frost’s homecoming last year. Getting some revenge against Northern Illinois would be nice, and beating Ohio State at home would be sweet, especially if both teams are undefeated going in. But this year, nothing is quite as important as creating a new West Division normal against Northwestern, Wisconsin and Iowa.

Bo and Woody are the gold standard for conservative Big Ten “three yards and a cloud of dust” offenses, but most of that old-school philosophy now resides in the West Division. If Frost is truly going to make the Big Ten adjust to him, the Huskers have to learn how to overcome Big Ten Ball, which pounds you with the running game and frustrates you into critical mistakes. Lately, run-heavy teams like these have found success by applying pressure to the Huskers and waiting for them to crack. The exception was the 2018 Northwestern game, which was won through the air. It’s hard to say what style of offense Northwestern will run with Clemson transfer Hunter Johnson at quarterback, but even if he turns out to be a gunslinger, Pat Fitzgerald will take the air out of the ball if he gets a second-half lead. The Badgers and Hawkeyes will pound the run as they always do. The Huskers will not win the West until they can stand up to that pounding, and finally learn how to start dishing out their share of the punishment.

Even an upset loss at Minnesota (a definite possibility) would not sting too much if the Huskers sweep these three home contests. Winning two of the three is an absolute must if you want to claim significant improvement over 2018.

Will the Blackshirts have enough size, strength and depth up front this fall to avoid being worn down? I think they will. Will Husker linebackers, a full year in Erik Chinander’s system behind them, turn into heat-seeking missiles? That remains to be seen. Can the Husker offense get enough first downs, enough reps, to apply enough pressure to crack the Wildcats, Badgers and Hawkeyes? Can they wear down their opponents differently than the old-school Huskers used to, by using pace as well as physicality? If J.D. Spielman gets injured, Nebraska suddenly looks a lot more run-heavy. But I think there’s enough flexibility in the Frost offense to beat you with varied amounts of run and pass.

The extent of this season’s recovery will hinge on the three home games against Northwestern, Wisconsin and Iowa. It will be a referendum on how much mental and physical toughness has returned to Nebraska football. To that end, expect increased passion from the players. We’ve already seen it from the coaching staff. Yes, NU needs to clean up its penalty habit. It needs to move up into the plus side of the net turnover category. It needs an occasional big play on special teams. But most of all, it needs to start winning at the line of scrimmage and being the stronger team in the fourth quarter again. If that happens, the Huskers will start winning young fans, earning respect and writing a fresh new story.