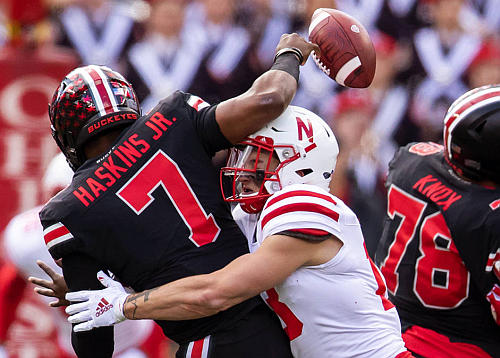 Courtesy of Nebraska Athletics
JoJo Domann forces a fumble as he sacks Dwayne Haskins.
By Tad Stryker on 11/3/2018

Ironically, on the day Nebraska lost its chance to qualify for a 2018 bowl game, it proved it is clearly a football program on the rise. The foundation is being built under a battling team that refuses to quit.

The Huskers couldn’t quite beat Ohio State in the Horseshoe, but they likely knocked the Buckeyes out of the College Football Playoff race.

Ohio State had to sweat to secure a 36-31 victory over the Big Red Saturday, proving the Buckeyes are not ready to take on Alabama or Clemson, and it was compelling evidence that Nebraska has made tremendous strides since getting blown out at Michigan on Sept. 22.

The optics of a five-point win at home against a 2-6 team are just not good enough for Urban Meyer and the Buckeyes. But Nebraska is much better than its record indicates, and set itself up for a late-season run that could provide excellent momentum for the 2019 season.

The Huskers lost with honor, pushing eighth-ranked Ohio State to the wall despite getting almost nothing from their special teams. The future is bright for first-year coach Scott Frost and the Cornhuskers.

Had it not been for an untimely false start on first and goal at the Ohio State 5-yard line, followed by a fumbled lateral on a poor decision by Adrian Martinez, the first 30 minutes in Columbus would have been the best overall half of football Nebraska has played since at least the 2015 Michigan State game. The Huskers outyarded the Buckeyes 256-212, got a pair of takeaways, held the ball for 18 minutes, and controlled the tempo, with Frost bleeding more than three minutes off the clock before Adrian Martinez scored on a 2-yard run with 15 seconds left before halftime to give NU a 21-16 lead.

Martinez led NU to its sixth consecutive 450-yard total offense output, which ties a school record. The true freshman had 338 total yards, completing 22 of 33 passes for 266 yards and a touchdown while rushing for 72 yards and two more TDs.

This team is developing an ability to shake off bad plays and keep moving forward. The offensive line got off to a decent start, then looked shaky at times before closing the first half with an exclamation point. The third quarter was lethargic, but Nebraska’s late touchdown drive was impressive. At the season’s three-quarter pole, the line has become much more dependable and cohesive than I thought it would, largely because it has sustained only one minor injury (to Cole Conrad) thus far. When you think of how many Husker offensive linemen limped off or were carried off the field the past two years, that may be the quickest, most noticeable benefit of Zach Duvall’s strength and conditioning program.

Meanwhile, the Blackshirts played their best game of the year before the front seven finally wore down against the Buckeye running game late in the contest. Eric Chinander gets credit for keeping the Huskers in the game while handicapped with an clear disadvantage in speed and almost no pass rush. Certainly the defense has a long way to go, but don’t forget the Buckeyes never had to punt against Nebraska while they doled out 62-3 and 56-14 beatings in 2016 and 2017. On Saturday in Ohio Stadium, they punted four times while the Huskers forced as many three-and-outs.

I can see good things ahead for sophomores JoJo Domann, Deontai Williams and DiCaprio Bootle, who is approaching the single-season school record in passes broken up. No doubt, Nebraska needs more speed at linebacker and more punch in the defensive line. Opponents simply don’t have to take Nebraska’s four-man pass rush seriously. Chinander desperately need to find a good edge rusher. Maybe Caleb Tannor can grow into one (that should be Duvall’s Job 1 this winter), but regardless, Frost needs to recruit another prospect.

And along with defensive backs coach Travis Fisher, credit Chinander for rebuilding Lamar Jackson into a Big Ten-caliber cornerback by changing his attitude, work ethic and mental game. After Jackson picked off Dwayne Haskins in the end zone on Ohio State’s opening drive of the second half, I texted my good friend, Glass-Is-Two-Thirds-Empty Husker Fan:

TS: “Never thought I would ever type that sentence.”

GITTEHF: ‘WHO WOULD HAVE BELIEVED IT”

For the first time since Meyer arrived in Columbus, Nebraska came close enough to OSU to play the “what-if?” game. Second-guessers can cuss about a whiffed onside kick by Caleb Lightbourn early in the first quarter, or the bonehead red zone decision by Martinez on a second-quarter lateral, or J.D. Spielman inexplicably short-arming and missing a good third-and-long pass from Martinez that might have gone for a 46-yard touchdown midway through the third quarter, or Frost’s choice to kick a field goal on fourth-and-goal from the 1-yard line with NU trailing 30-21 with just under 8 minutes left in the game. But the major damage to this season was done long ago.

This is where the hard-to-fathom series of untimely penalties, special-team gaffes and turnovers that caused one-score losses to Colorado, Troy and Northwestern land like a sledgehammer on the Huskers, who with their seventh setback, have missed their opportunity to get their seniors to a bowl game.

Nebraska’s lack of athletic depth is sorely evident on special teams, which were the difference in this game, adding to their ledger a blocked punt for a safety, a botched onside kick, two short kickoff returns, 2 yards in punt returns and a failure to recover a Buckeye fumbled punt. Even Isaac Armstrong looked shaky punting the ball.

Despite all that, a rising tide of optimism is lifting Husker Nation. I think this team will rebound with three more good performances to close out the season. More certainly needs to be done, but Frost is starting to deliver on his promise of a disciplined team with a blue-collar mentality and high ethical standards.

At game’s end, Frost exchanged only a brief handshake with Meyer at midfield and ran to the locker room, seemingly intent on getting ready for next week.

A year ago, after Nebraska lost an overtime game at home to Northwestern, it felt like Mike Riley was leading a death march to the end of the season. But heading into the last three games of 2018, it feels like Frost, despite a 2-7 record, is just getting things started.