Stryker: The 50 most significant Husker plays, Part One 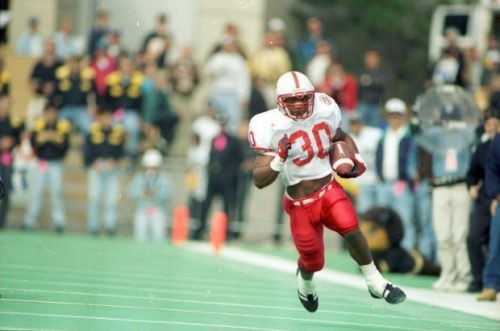 Ahman Green rips the heart out of Colorado early, taking an option pitch to the house on the Huskers' first snap in the 1995 game at Boulder.
By Tad Stryker on 7/14/2019

Of all the biggest, most significant plays in Nebraska football history, it’s amazing how few of them have come in Memorial Stadium.

Or so I thought, until I started digging into the research for this column (or rather two columns; the second will come next weekend), which give my list of the 50 most significant Husker football plays in the 57 years since Bob Devaney came to Lincoln.

It’s true, a majority of the most significant plays happened outside of the state of Nebraska; when you’re among the best programs in college football history, it stands to reason that many of your most important games would be held at bowl venues (and the Cornhuskers have played exceptionally well on the road in big games). But when you look at plays 50 through 26 below, you’ll find many that happened in front of a home crowd. And there’s a good mix of offense, defense and special teams.

And fullbacks — lots of ’em.

What was the most significant play of Scott Frost’s first season? It was the 35-yard touchdown pass from Adrian Martinez to Stanley Morgan with 6:04 left in the third quarter against Minnesota, which stopped the Gophers’ 22-0 run and stretched the Husker lead to 35-22 on the way to Frost’s first victory as Husker coach. It didn’t make this list, but there are many significant days ahead for Frost’s teams.

So what makes a play significant? For purposes of this column, it has a lot to do with plays vital to winning important games, games that clinch championships, or keep you in the running for them. Let’s classify it this way:
• its importance to Nebraska football history, contributing to winning championships, keeping in mind the level of competition.
• its importance in creating memorable images, fan reaction.
• the boost it gave to the Nebraska brand.

There are many connections to the “By the numbers” and “By the numbers 2” columns I wrote in 2016, and to the “Best games by decade” column I wrote in 2015. Yet there are significant differences. Even though it was my most memorable moment by a Husker wearing number 15, you won’t find Tommie Frazier’s “refuse to be sacked” play at Boulder in 1995, because although it showcased Frazier’s strength, pride and determination, it didn’t make much difference in the game’s outcome. And although it doesn’t necessarily have to happen in a game won by the Big Red, it has to count as a play. For example, I eliminated Corey Dixon 71-yard punt return TD against Florida State in the 1994 Orange Bowl, because it was called back by a phantom penalty.

Here they are, in reverse order:

50. Tommy Armstrong’s game-winning 34-yard quarterback draw vs Oregon in 2016 with a lead block from Devine Ozigbo. Armstrong cramps up badly on a warm afternoon in mid-September, but keeps coming back, showing his trademark toughness, to the delight of a loud home crowd. Armstrong is one of only four Husker quarterbacks in history (Eric Crouch, Tommie Frazier, Turner Gill) to lead his team to 30 or more wins as a starting quarterback.

49. Barry Turner blocks a 42-yard Texas A&M field goal attempt with about two minutes remaining to keep NU within striking distance, 27-21, Nov. 11, 2006, in College Station. This makes possible the heroics of No. 27 below.

48. Frank Solich, a 160-pound senior fullback, slashes 80 yards off right tackle on the first play from scrimmage to give the Huskers a quick lead against Air Force in 1965. Solich rushes for 204 yards — still Nebraska’s all-time single-game record for fullbacks —as the Huskers prevail, 27-17, winning their only visit to Colorado Springs and building momentum toward their first undefeated regular season in half a century. Solich scores twice more to provide most of the punch in an otherwise sluggish Husker effort against the pesky Falcons in the highest altitude they ever experience until traveling to Laramie, Wyoming, in 2011.

47. The best fake punt in college football history, the original Bummerosky fools cameramen, TV and radio commentators and all 68,195 spectators in Faurot Field on Nov. 1, 1975. One moment, Randy Lessman dropped back to punt from near midfield with less than two minutes remaining in the first half. The next moment, personal protector Tony Davis whirls and appears to hand the ball to Monte Anthony for a reverse, with all the action flowing to the right. Then, suddenly John O’Leary circles left end and by the time anyone notices, he has almost finished his 40-yard touchdown romp. To summarize, Davis takes a short snap while standing behind O’Leary. He hands the ball forward between O’Leary’s legs, then carries out his elaborate deception. The trickery increases NU’s halftime lead to 16-7, and the Huskers dominate the second half for a 30-7 win.

45. Mike Rozier’s reverse-the-field 2-yard TD run in a 42-10 rout of UCLA, gives him an unforgettable image which, along with more than 2,000 rushing yards and a 7.8-yards-per-carry average, locks up his Heisman Trophy and typifies the Scoring Explosion offense in 1983.

44. Tom Rathman’s 84-yard burst for a touchdown breaks a 7-7 tie late in the third quarter, propelling Nebraska past Colorado 17-7 on Homecoming 1985, stretching NU’s winning streak over the Buffs to 18.

43. De’Mornay Pierson-El’s 80-yard punt return for a score culminates a three-touchdown rally and gives Nebraska the lead in the fourth quarter at Iowa, 2014.

41. Ndamukong Suh rag-dolls Texas quarterback Colt McCoy, one of his 4.5 sacks in the 2009 Big 12 Championship in Arlington, Texas. Although a lackluster offensive performance by Nebraska enabled the Longhorns to win 13-12 on a walk-off field goal, Suh turned the night into his personal highlight reel, setting Big 12 title game marks for sacks and tackles for loss (7).

39. Two for the price of one: I-back Rick Berns catches a 7-yard touchdown pass from Randy Garcia on a fake field goal late in the first quarter, then goes up and over the top for a 1-yard touchdown with 7:12 remaining in the fourth quarter, the winning points in a 31-24 win over Alabama in Memorial Stadium the second week of the 1977 season. Berns rushes for a game-high 128 yards as Tom Osborne wins head-to-head against Bear Bryant.

38. A 15-yard run by fullback Jeff Makovicka increases the lead to 14-6 with 11:01 remaining and the Blackshirts make it stand up for a 17-6 win in a brutal fistfight against Kansas State on a wet, dismal October afternoon in Manhattan, making Matt Turman a winner in his only career start. The Huskers pass the toughest regular-season test on the way to Tom Osborne’s first national title. It also keeps Osborne undefeated against Bill Snyder.

37 Dennis Claridge uses key blocks by senior guard Bob Brown and sophomore end Tony Jeter to sprint 68 yards for a touchdown on the second play of the 1964 Orange Bowl. It provides the margin of victory in Nebraska’s 13-7 win over Auburn, a satisfying conclusion to the Huskers’ first conference championship season in 23 years.

35. Fullback Phil Bates crashes 3 yards for a touchdown with 23 seconds left, providing the only score in Nebraska’s 6-0 win at Missouri in 1981.

34. The Westerkatch — a 49-yard Hail Mary from Ron Kellogg to Jordan Westerkamp to beat Northwestern 27-24 in 2013 (still Nebraska’s only Big Ten home win over the Wildcats). No Nebraska fans run onto the field, but they revel and roar without letup for more than five minutes afterward.

33. Mike Fullman’s sideline-dancing 79-yard punt return TD to draw first blood against Kansas State with 10:29 left in the first quarter. Fullman is sprung by Mike Rucker’s devastating, de-helmeting blindside block of Joe Gordon. The Huskers go on to win 49-25 in an unstoppable charge to the 1995 national title.

32. Terry Connealy sacks Frank Costa late in NU’s 24-17 win over Miami in the 1995 Orange Bowl. The image of the ranch kid from the Sandhills celebrating over the kid from Philly reinforces the blue-collar Blackshirt image.

31. Ahman Green’s 57-yard option pitch touchdown on the first play of the 1995 game in Boulder starts the proceedings with a cold slap across the Buffs’ face. The Huskers pound Colorado 44-21 without committing a penalty or turnover.

30. Taylor Martinez dazzles the Badgers with a 74-yard twisting, winding touchdown scramble in the 2012 Big Ten Championship. The amazing individual effort is one of the few things that goes right for NU in a 70-31 Wisconsin blowout win.

28. Ameer Abdullah saves the day with his game-winning 58-yard screen catch-and-run in the final seconds to beat McNeese State 31-24 in 2014, and Nebraska avoids Michigan-type embarrassment of a loss against an FCS team.

27. Zac Taylor’s 9-yard lob pass to Maurice Purify for the game-winning touchdown with 20 seconds remaining at Texas A&M, 2006. The deliberately underthrown pass comes out of the lights and utilizes Purify’s height. It gives NU a 28-27 win, clinches the Big 12 North Division title and the high point of the ill-fated Bill Callahan era.

26. Barron Miles smashes Miami’s Yatil Green for a loss on a jailbreak screen late in the third quarter, ending the Hurricanes’ last substantial drive of the 1995 Orange Bowl. The 24-17 win gives Osborne his first national title.