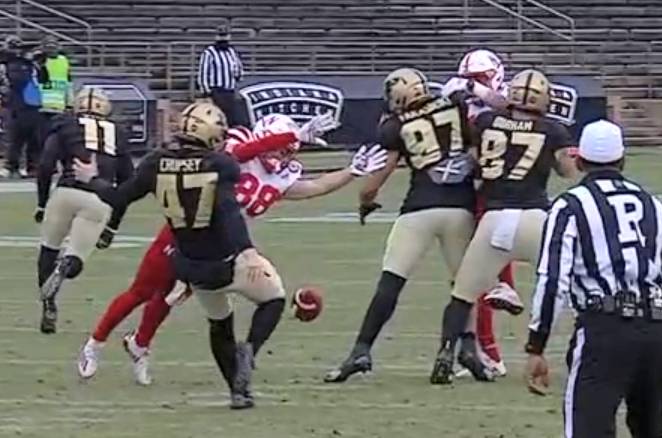 Levi Falck sets up Nebraska's first touchdown with a punt block.
By Tad Stryker on 12/5/2020

By showing his younger teammates what playing with a short memory looks like, Cam Taylor-Britt stepped up and performed triage on a Cornhusker football season on the verge of spiraling out of control.

The junior cornerback helped Nebraska grab a big early lead, then stabilized his team when it most needed steadying down the stretch.

On a day when the Huskers finally made some plays when they really needed them, a day when they gave themselves some margin for error and even showed up on third down, Taylor-Britt led the way during NU’s 37-27 road victory over Purdue Saturday.

It was a tonic for Husker Nation to see their team enjoy the fruits of victory, like an Adrian Martinez postgame interview with BTN. It was even more important for a young Husker team to return to the scene of last season’s most frustrating loss and revive their season by playing solid defense against the Big Ten’s top-ranked passing attack.

As much as any position on the field, cornerbacks have to learn to forget a bad play and focus on the next one. But Taylor-Britt did more than that. He said the right things earlier in the week when asked about his catastrophic punt fumble at Iowa City, and then went one better by getting it done on the field. He set up Nebraska’s second touchdown with a 27-yard punt return in the first quarter. He shook off an unlikely 89-yard touchdown by the Boilermakers when he and Markel Dismuke collided as they both seemed ready to knock down a long pass to likely all-conference wideout David Bell.

Bell’s score accounted for more than one-fourth of Purdue’s 332 total yards. It came with just over 12 minutes remaining in the game, and pulled Purdue to within seven points. It was another of those all-too-frequent “Here-we-go-again” moments, and Nebraska seemed ready to cough up the remnants of a 21-point lead. It was a real opportunity for the Huskers to cave. But it didn’t happen.

The Husker offense battled back on a penalty-filled drive from its own 7-yard line to extend the lead to 10 points on a 32-yard field goal by Connor Culp with 7:04 left (it was the third of the game and 12th in 13 tries this season for Culp, the transfer from LSU who hit a personal-best 49-yarder in the second quarter).

On the next series, Purdue quarterback Jack Plummer tried to hit Bell deep again on third down, but Taylor-Britt shadowed him step for step and made an athletic, backward-leaping deflection to close out the drive and the Boilers’ last opportunity to win.

Simply put, the 2-4 Huskers did the things you have to do to win a football game, and they did them when they needed to be done. That’s been a very high mountain for this team to climb since Scott Frost took over three years ago. Doing it against a team on a three-game losing streak won’t gain Nebraska any national attention, nor should it, but let’s take one thing at a time. By showing a bit of mental toughness, the Big Red gave itself an opportunity to stay out of the Big Ten West basement this season. Baby steps.

They did it by getting out in front early. It was 17-0 with about six minutes left in the first quarter, and could have been worse. It started with a rare special teams breakthrough, a blocked punt by Levi Falck which set up a 1-yard touchdown run by Dedrick Mills on Nebraska’s first offensive play. On the following drive, the Blackshirts chalked up a three-and-out and Taylor-Britt created another special teams bright spot by returning a punt 27 yards, setting up NU with the ball on the Purdue 23 after a Boilermaker penalty tacked on 15 yards.

Adrian Martinez (who played almost the entire game at quarterback despite sustaining what appeared to be a minor right shoulder injury in the second half) turned that into a 14-0 lead when he scored on a 13-yard scramble, navigating traffic and diving into the end zone for the first of his two rushing touchdowns. NU followed up with another three-and-out, ending with a Ben Stille sack on third down, and a short punt gave NU the ball in Purdue territory for the third consecutive drive, setting up Culp’s 25-yard field goal.

From that point on, the Blackshirts made Purdue one-dimensional. They allowed negative-2 yards rushing on 17 tries, and Plummer went 33-for-47 for 334 yards and three touchdowns, although NU was disruptive at times against two of the best pass receivers it will see all year. The Huskers kept all-conference wingback Rondale Moore contained. Moore had 13 receptions but just 78 yards and no touchdowns. His counterpart, sophomore Wan’Dale Robinson, more than played Moore even, making nine catches for 114 yards. None was more important than his 12-yard catch on third-and-10 during the second-quarter drive that extended NU’s lead to 27-10, when Martinez calmly beat a Boilermaker blitz to find Robinson over the middle.

One of the keys to the win was third down, where Nebraska converted 6 of 15 compared to Purdue’s 3 of 13. Another was running back Dedrick Mills, who returned from an injury to carry the ball 16 times for 60 yards and a touchdown. It’s important to Frost’s offense to get production out of the running backs. On this day, it reduced the emphasis on the quarterback draw and limited Robinson to only two carries. Hopefully, Mills gets more carries next Saturday against Minnesota and can at least offset the Gophers’ tough junior, Mohamed Ibrahim, who has more than 800 rushing yards in just five games.

It will be important to contain Ibrahim. The Huskers have reduced opponents’ yards per carry to 4.0 this year, but have not proven themselves consistent against the run.

Along with outside linebacker JoJo Domann, Stille and Taylor-Britt are Nebraska’s steadiest defenders, and it’s becoming evident that platoon provides the team’s best sources of on-field leadership. Stille and sophomore Garrett Nelson each had 1.5 sacks as the Huskers piled up nine tackles for loss.

Credit the Huskers with back-to-back good efforts. That’s not to be confused with steadiness and discipline, however. The Husker offense remains inconsistent at best, and it missed opportunities to step on Purdue’s neck. Penalties were harmful to both teams. It was the first Big Ten game since 2003 where both teams had more than 100 penalty yards.

It will be important to wipe that statistic out of the collective Husker memory banks and press on. Frost and his staff face the challenge of orchestrating a steady performance — another mountain that this year’s team has not been able to scale. It will be important to confront those negative memories and erase them, one step at a time.