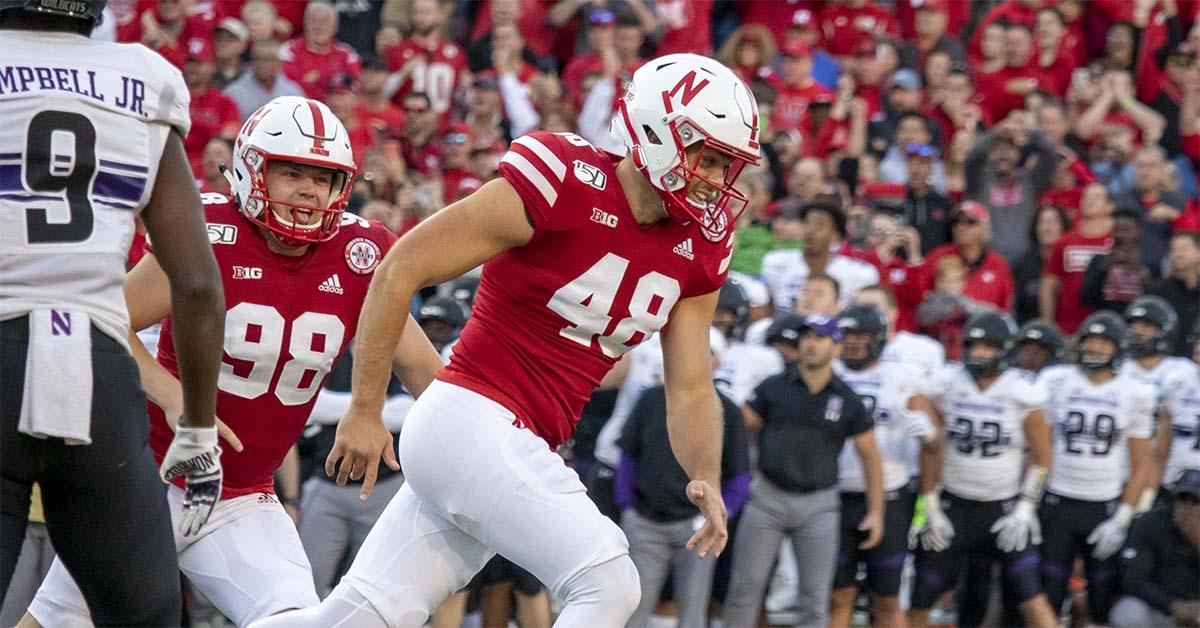 It’s a long way for a quarterback from Wahoo, Nebraska, to go Orlando, Florida, then return to Lincoln to lead a game-winning scoring drive at Memorial Stadium.

It’s a long-shot dream to go from placekicking for the Norfolk Panthers, to being a cadet at the Air Force Academy in Colorado Springs, and then coming back to Lincoln to kick a walk-off field goal for the Cornhuskers.

So think about what a long shot it is for both those dreams to converge in the final seconds of the same Big Ten football game.

Many young men stay home to walk on for Nebraska. Only a few return home to do it. The heroics of Noah Vedral and Lane McCallum were the difference Saturday in Nebraska’s 13-10 win over Northwestern, a victory that pumps life into the Huskers’ bid to return to a bowl game after being denied two seasons in a row.

With starting quarterback Adrian Martinez sidelined by an injury, Vedral came in to run for 33 yards on seven carries and complete two of five passes for 41 yards, including a 32-yard strike to freshman Wan’Dale Robinson to put the ball at the Northwestern 16-yard line, eventually setting up McCallum’s 24-yard field goal as the clock expired.

This is why Vedral and McCallum returned home to play for the Huskers: to deliver a game they absolutely could not afford to lose.

With starter Barret Pickering sidelined all six games with a mysterious, undisclosed ailment, and backup Dylan Jorgensen out injured for the last five, McCallum could certainly be called Nebraska’s emergency placekicker. And the execution of that final kick was shaky. For some reason, the placement was set only 6½ yards behind the line of scrimmage, instead of the usual 7. And It’s hard to say even after watching the replay, but I think it was slightly deflected. No matter.

His low, line-drive kick somehow made it through a sea of Wildcat hands and straight through the uprights.

You could call it an ugly kick. But It was a beautiful sight to a tense, hopeful Nebraska crowd which had grown weary of seeing the Huskers lose close games in brutally dispiriting fashion over the last few seasons, especially against Northwestern, a school with relatively little football success over the past century.

Things looked good early when Robinson — the Huskers’ offensive MVP in the season’s first half —made a jump cut, got a timely kickout block from Matt Farniok and blazed down the east sideline for a 42-yard touchdown run to make it 7-0 in the first quarter. McCallum added a 35-yard field goal in the second to give the Huskers a 10-0 lead. He later hit the right upright with a 29-yard attempt in the third quarter, and for a long time, it seemed like Nebraska’s final scoring opportunity had dissolved, because 6-foot-4, 246-pound future NFL linebacker Paddy Fisher and the Wildcat defense bottled up Martinez and the Husker offense for most of the second half. For the longest time, it seemed that Nebraska and Northwestern were headed for their third consecutive overtime.

Martinez and wide receiver J.D. Spielman left with apparent knee injuries. Thankfully, Robinson is still healthy. He accounted for more than half of Nebraska’s total offense and was the only real sign of life in a Husker attack that’s gone stagnant the last two weeks due to a combination of injuries, turnovers, penalties, dropped passes and flat-out poor blocking. Frost held out Maurice Washington the first half for a violation of team rules, and Washington never got going in the second half. The Husker offense and kicking game are perilously shaky at the season’s halfway point. Frost has a lot of work ahead to tune it up, even if he gets all his starters back.

Somehow, Vedral moved that backfiring, oil-burning jalopy of an offense 40 yards in 57 seconds.

After Robinson’s big catch along the west sideline, it was really more difficult than it needed to be for the Huskers to position themselves for the game-winning kick. Right after Robinson’s big play set up the Huskers at the 16, senior wide receiver Mike Williams was whistled for a pre-snap illegal procedure (one of eight penalties for the Huskers) that set them back. Two steps forward, one step back. The progress is slow for Nebraska this season.

But Vedral bailed out Williams with a pair of runs that netted 13 yards, and the Huskers called time out with three seconds left.

Coach Scott Frost saluted Vedral for his composure in the game’s final minute.

“He handled it great,” Frost said. “The long pass down the sideline to Wan’Dale that got us in field goal range was something that wasn’t even on the call sheet. So we are just kind of trying to adjust and get him in something that we thought would work based on the way they were rotating on that motion. He made a good throw. Wan’Dale made a good play.”

Frost said Vedral did some more freelancing on his final run that set up the ball in the middle of the field for McCallum.

“It was great to see him on that last play we called something that we hadn’t practiced, but I just wanted to get the ball in the middle of the field, and he knew that and understood it. He got some yards and got down. So, a lot of credit to Noah. I’m happy for him.”

The game played out almost exactly like Northwestern coach Pat Fitzgerald wanted it. It was an ugly, lows-scoring mud wrestling match —the Wildcats’ specialty. The only twist in the script was that Northwestern committed the game’s only turnover, Lamar Jackson’s midfield interception of a tipped pass with a minute left to play. It couldn’t have come at a better time for the Big Red.

Since the Huskers joined the Big Ten, it’s always been a tense struggle when Nebraska and Northwestern play in Lincoln. The Wildcats have won three of five in Memorial Stadiium since 2011. But those two Husker wins have been historic. Toss in the Ron Kellogg-to-Jordan Westerkamp Hail Mary in 2013, and Northwestern now has been burned by Husker walk-ons for two of the three walk-off wins in the history of Nebraska football. The other was Josh Brown’s field goal to give NU a 34-32 win over Colorado in 2000.

Even though Nebraska (4-2) has already matched its win totals from 2017 and 2018 at the season’s midpoint, it seems like a steep climb to simply get the Huskers to six wins and a bowl game, which would give them 15 extra much-needed practices. By the end of November, the small but mighty push from two local boys may look gigantic indeed.