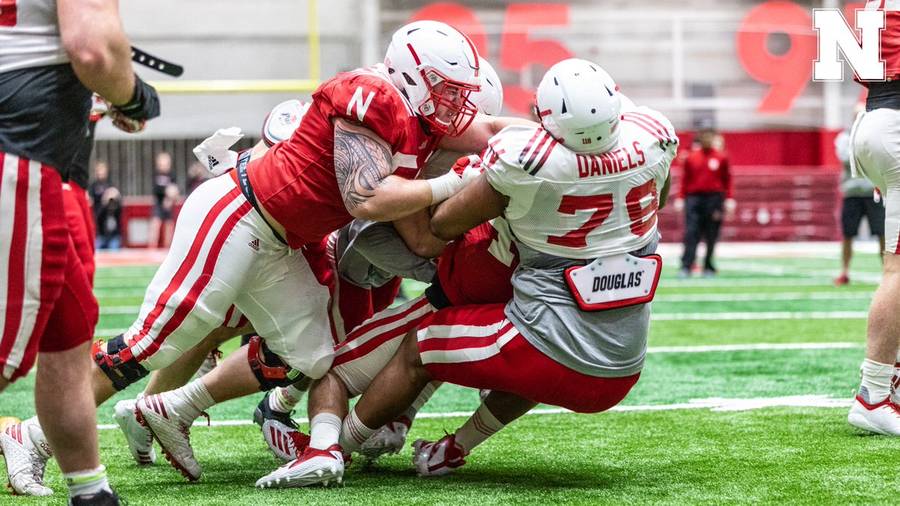 Nebraska Athletics via Twitter
Senior transfer Darrion Daniels will be right in the middle of the Nebraska defensive line revival this fall.
By Tad Stryker on 8/11/2019

Hurricanes never blow in from the Great Lakes, and tornadoes are not on people’s minds in the Rust Belt as much as they are out on the Great Plains. For decades on the football field, the Big Ten has been comfortable with predictability. Ohio State and Michigan battle for top honors. It’s just expected, although Penn State and Michigan State and occasionally, Wisconsin or even Iowa, will take an occasional swipe at the conference title when the stars and schedule align.

Someday, something might happen to shake up this world. In the meantime, the Big Ten says, “We’ll believe it when we see it,” and nobody’s blaming them for that.

Nebraska is the B1G’s High Plains outlier, has been since the day Tom Osborne and Harvey Perlman maneuvered the Big Red into the club. Stability was the selling point — financial stability, at least, and that has been a good thing. But now Nebraska threatens to do what it should have done from from Day One — bring a new level of autumnal unsteadiness to this hidebound old institution. That happens if Nebraska would simply get back to being Nebraska, as Jim Delany observed.

NU has done little lately to deserve anyone’s esteem on the gridiron. But to close observers, there’s no denying the presence of an unpredictable storm forming over Lincoln. Although many are giving preseason lip service to Nebraska, it’s only due to the coaching resume of Scott Frost and the rise of Adrian Martinez at quarterback. Privately, Big Ten coaches and fans still downplay and chuckle about the new-look Huskers under Frost. But it’s a nervous chuckle.

Officially, nobody fears Nebraska football right now, but I think that will change in the next 12 months. This is the season the entire Big Ten footprint — coaches, players, fans and media — learns to respect what Frost is brewing in Lincoln.

Consistently damp cold, snowy winters, huge offensive lines and hard-nosed running games are the predictable Big Ten way. And frankly, Nebraska knows that formula. At least, it used to. Frost ball purports to outscore opponents with pinpoint passing, getting the ball to speedy athletes in space, and shredding those stretched-out defenses with the run. That sounds like a ray of sunshine in the Upper Midwest. And don’t get me wrong; if Zach Duval indeed has abolished the pillow-soft midsection that characterized the Riley years, Frost’s offense may indeed run wild. But in the last half dozen years, with a few notable exceptions, Big Ten opponents have used their age-old formula to hold Nebraska in check, and they still can play keep-away from Frost’s offense if the Blackshirts continue to allow 5 yards per rush. The only way the Cornhuskers change that is with significant improvement in their offensive and defensive lines.

Defense is where Nebraska will earn back its respect, starting this fall.

What position group makes the biggest leap in 2019? Thankfully, it will be the defensive line. Although no individual player is highly regarded among Big Ten media, this is where Nebraska football will improve the most as a unit. Ideally, a great lineman or two will emerge, but likely not until next season. The good news is there will be an abundance of good ones, and the d-line will solidify to the extent that the Huskers allow less than 4.0 yards per rush, a 20 percent decrease from 2018. Sacks will not dramatically increase (they went from 14 in 2017 to 25 in 2018, so look for about 32 this fall) but I foresee more quarterback hurries and balls deflected at the line of scrimmage.

At worst, the Blackshirts will allow 25 points per game this fall, which would probably make the Top 50 nationally, compared to last year’s 31.2 points per game (No. 88). They will improve their third-down defense from 43.2 percent (among the worst in the nation) to around 38 percent (midlevel nationwide) and increase takeaways from 20 to 25, which would put them in the Top 25.

Solid, not spectacular, is all anyone could expect from the Blackshirts in 2019, and it’s really all the Husker need to rattle the conference. I think Nebraska will have at least one defensive lineman taken in next April’s NFL draft (likely either Darrion Daniels or one of the Davis twins), but none will make first- or second-team All-Big Ten because of the abundance of great lineman in the conference this season, including Ohio State’s Chase Young, Iowa’s A.J. Epenesa, Penn State’s Micah Parsons, Minnesota’s Carter Coughlin and Michigan State’s Kenny Willekes and Raequan Williams.

Nebraska answers with seven solid linemen of its own. Ben Stille, the junior from Ashland, will play himself into contention for all-conference honors in 2020. That could also happen with South Carolinian Jahkeem Green, a junior college transfer. Sophomore Damion Daniels will be rock solid against the run; he has to maintain his stamina for half a dozen consecutive full-speed plays. At least one freshman will make the rotation, giving d-line coach Tony Tuioti nine dependable players to rotate in and out like hockey lines. This d-line will not wear down against Wisconsin and Iowa like it has done in recent years.

Nebraska’s best chance to break into the Big Ten defensive first or second team this season is in the secondary, where junior cornerback Dicaprio Bootle and junior safety Deontai Williams will take advantage of an improved pass rush and get a few picks, while senior Lamar Jackson has an outside chance of being a late-round draft pick. That will be largely because of improved line play, though. Cam Taylor will start showing enough versatility to make him a high-round NFL Draft pick in a few years.

The best scenario has senior Mohamed Barry finally realizing his vast potential, turning into a disruptive holy terror at inside linebacker and inspiring teammates to heights they’ve never approached (see senior outside linebacker Alex Davis and defensive end DaiShon Neal). And while we’re dreaming, JoJo Domann and Tyrin Ferguson would somehow avoid injury throughout the long campaign. But I’m a bit more realistic than that; I see linebacker as NU’s Achilles’ heel on defense. Strong linebacker play would quickly turn Nebraska into the Big Ten’s worst nightmare. Best possible scenario? The 2019 Huskers go 11-3, including a hard-fought loss in the Big Ten Championship.

If nothing else, the floor will be significantly higher this season for the defense, which will benefit from a teamwide trend toward fewer penalties. But like the offense, the Blackshirts will bust assignments and make their share of young, talented team mistakes. How will they respond to that adversity? That’s where we’ll discover the value of Frost’s staff. I look for a 9-4 finish, including a bowl win. At least enough to get the folks in Ohio and Michigan thinking about stocking their storm cellars.