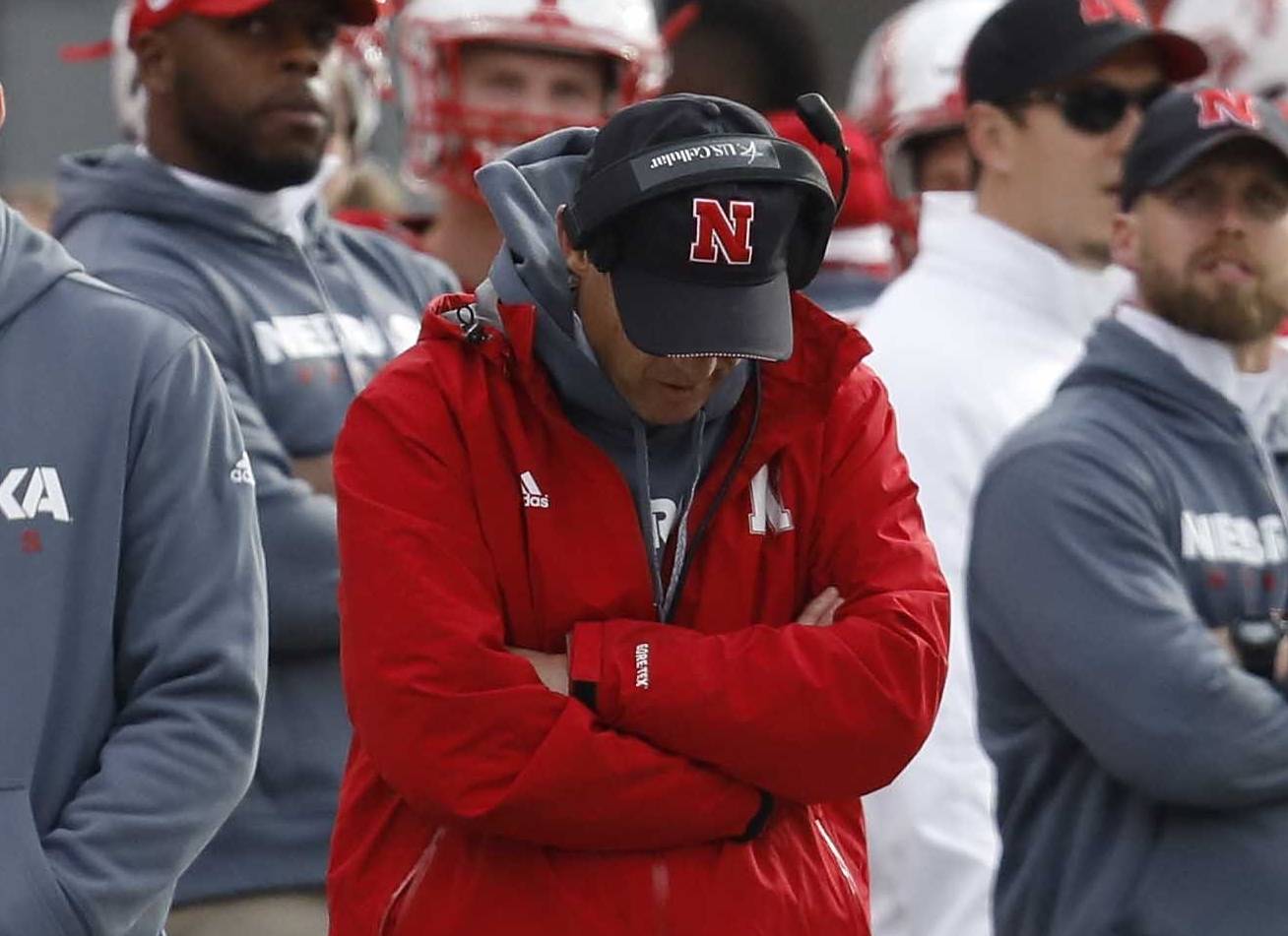 Bruce Thorson-USA TODAY Sports
Nebraska coach Mike Riley looks down during the game against Northwestern.
By Tad Stryker on 11/4/2017

Mike Riley’s last stand in Lincoln ended just the way you might have predicted it would.

When one last push would have clinched a victory, when the Cornhuskers could have given themselves and their embattled head coach some late-season momentum, they could not deliver the blow. At crunch time, with shadows lengthening and the game — and Riley’s last realistic chance of long-term success at Nebraska — hanging in the balance, the Huskers crumbled at the line of scrimmage. Again. How predictable was that?

Nebraska was going up against Northwestern, which played two overtime games in the previous two weeks, and should have run out of gas long before the Huskers. Instead, it was Nebraska who cracked in the second half, both on offense (no touchdowns after halftime) and defense, when Bob Diaco’s unit allowed a 13-play, 84-yard drive to tie the game with 5:32 remaining in the fourth quarter. Along the way, Northwestern converted a third-and-9 and a fourth-and-1 before quarterback Clayton Thorson ran 7 yards to deadlock it at 24.

The overtime period had a feel of inevitability, didn’t it? Northwestern was much stronger at the line of scrimmage and deserved the win. The outcome (a 31-24 Wildcat victory) was anticlimactic.  So now is the rest of the season.

Some wrote off Riley’s chances in Lincoln when Shawn Eichorst was fired. I did not. But now I see no other ending to this drama.

The Northern Illinois game was the turning point for Riley, but the Northwestern game was his final chance to show he could mobilize his team for an impressive stretch run. His chance has disappeared. All the variables have been worked through, and Riley’s regime has been defined for all time by its weakness at the very center of the program. It’s November now, and it’s evident that Riley and his staff are not going to finish strong. I think they’ll get the opportunity to finish the season, but I see no future for them beyond Nov. 24. Maybe new athletic director Bill Moos does; I don’t know.

As so often happens in the Big Ten, Saturday’s Nebraska-Northwestern game came down to who was tougher at the line of scrimmage. A decent running game, if Riley knew how to put one together, would have saved him on this day. But the running game has imploded in devastating fashion. A decent passing game might have been enough, but just when the Huskers thought they had one, it fell apart. Tanner Lee completed 21 of 38 passes for two touchdowns, but his old interception habit returned with a vengeance. Lee’s three picks were too much to overcome. His season totals stand at 17 touchdowns, 13 interceptions and a 56.4 percent completion rate. With no running game to speak of, that’s not enough for Riley’s pro-style offense to survive.

Right after Riley was hired by Eichorst Dec. 4, 2014, I posed this question: “Will he understand what it takes to win in the Big Ten?” Northwestern’s victory (their third consecutive overtime win and Pat Fitzgerald’s third win in Lincoln in four tries) shows that this critical lesson continues to elude the former Oregon State and San Diego Charger head coach, who has a 12-11 conference record.

Actually, NU had two excellent chances to clinch a victory over Fitzgerald and his team, but could not nail it down. Twice late in the game, Riley’s offense had a seven-point lead and possession of the ball in excellent field position. The first time, the Huskers went three-and-out at midfield (the critical play was second-and-five from midfield, when a missed assignment on the left side of the line doomed Devine Ozigbo to a two-yard loss).

After the Husker defense forced a Northwestern punt, a pair of catches by J.D. Spielman and a personal foul penalty moved the ball into the red zone. Then, even with Nebraska in a max-protect call, the o-line allowed a stunting Wildcat defender to hit Lee as he threw the ball, which fluttered into the hands of Northwestern safety Godwin Igwebuike at the Nebraska 16-yard line. It turned out to be the moment that sealed Riley’s fate.

“That’s the deflating, disappointing part,” Riley said in his postgame press conference. “We had our chances to take a lead that would have made them get two scores in the fourth quarter and we didn’t do it.”

There’s not an ounce of killer instinct in Riley or his football team. The Huskers have lost any ability they once had to take control of a football game. The last time we could feel comfortable with a Husker lead in a conference game was Nov. 14, 2015, in Piscataway, New Jersey, when Nebraska beat Rutgers 31-14. Since then, Nebraska has scored 30 or more points only one time in 16 Big Ten games. Riley’s philosophy does not work in the Big Ten without a no-holds-barred commitment to recruiting and developing all-conference-level offensive linemen. That commitment is sadly lacking.

Saturday provided more evidence for those who predicted mediocrity for Riley’s term in Lincoln. This was the breaking point for his opportunity to exceed Bill Callahan’s accomplishments at Nebraska — a very low bar indeed. But Riley’s not going to get over that bar.

More from that December 2014 column: “Some critics evaluated his pass-happy offense at Oregon State over the past few years and his status as a former NFL coach and quickly proclaimed him Bill Callahan 2.0. “ Well, those folks are looking smarter all the time. I wasn’t one of them. At the start, I rooted for him to make it big in Lincoln, but it became clear this year that Riley doesn’t really know how to develop a solid offensive line.

Those of you who read my column regularly know I’ve pounded this theme like a bass drum ever since Riley’s hiring. Riley’s success, I wrote in that column, would be directly tied to his ability to transform Nebraska into “Offensive Lineman U.’ It’s not going to happen. Riley, and line coach Mike Cavanaugh — the one other man most reponsible for his downfall — have not come close to developing a single all-conference o-lineman.

It’s becoming more evident every week that Riley’s style of football does not put a high priority on physicality. He’s a nice guy, but not a viable head coaching option for Nebraska over the long haul. There’s simply too much evidence piling up against him and his philosophy of football.

Good running teams beat good passing teams. The mathematics of college football are unyielding on this. It happens all the time, and it happened again Saturday at Memorial Stadium, when a mediocre rushing team like Northwestern defeated a sometimes-excellent passing team in Nebraska. Physical teams beat finesse teams, especially in the Big Ten. It’s just what they do.

Riley’s offense is not working in Lincoln. The Huskers were gifted a defensive touchdown when Marcus Newby returned an interception 49 yards to paydirt, so they had every opportunity to hit that elusive 30-point barrier againslt a Wildcat team whose tank had to be dangerously close to E. They failed.

Senior Drew Brown continues to do a solid job since Day One as Nebraska’s placekicker, and he will be missed next fall. Stanley Morgan and Spielman are the bright spots on the offense. Looking elsewhere on the team, partly due to injury at running back, the only position the Huskers have shown dramatic improvement is punter, where Caleb Lightbourn is quietly having an excellent season.

With the loss to Northwestern, Riley missed his last real opportunithy to improve on Callahan’s lifetime record at NU. Callahan finished with a .551 winning percentage. With this loss, Riley falls to .542 with three games remaining. Let’s assume Nebraska wins at Minnesota next Saturday. Barring a catastrophic series of injuries in Happy Valley and Iowa City over the next couple of weeks, Riley will lose at least two more to Penn State and Iowa, which would put him at 20-18 (.526) for his career and lock a 5-7 Nebraska team out of a bowl game.

After running the table in home games last season, the Huskers have been lousy in Memorial Stadium, losing four of their last five. Even in the depths of 2007, Callahan’s team never had such a bad stretch at home. The last time Nebraska lost four out of five consecutive home football games was 1961, the year Bill Jennings was fired.

Nebraska football program has big challenges ahead. First, there’s the task of ending the season, which will be tough with all the noise surrounding Riley and his future.

Riley, one of the finest men in college football, is not cutting it as a football coach. This is a lousy spot to be in. Good grief, I’d vote for Riley as NCAA Man of the Year, if such an award exists. But if I had the chance, I would not vote for his continuance as Husker football coach. I know a lot of high-character men who should not be in charge of major-college football programs. The future of the Nebraska football program is more important than Riley’s future.

Nebraska has more talent than Northwestern, and about as much as Wisconsin and Iowa, at least on the offensive side of the ball. Unfortunately, this coaching staff has failed to develop it adequately. I feel bad for the players. These are high-character young men who will keep fighting the rest of the way, as they should, and I salute them for it. They deserved a better season than this. They deserved better leadership than this. Maybe the underclassmen will get better leadership soon.