Stryker: Put Martinez under center as an occasional changeup 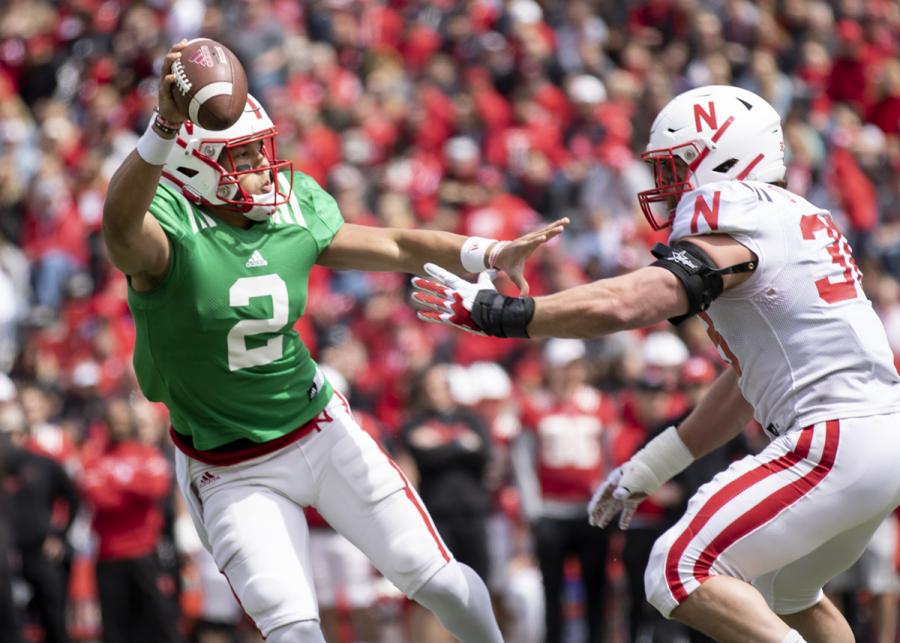 On the road to creating a high-force offense with Oregon speed and Husker power, Scott Frost needs to find a way through a boggy valley.

It’s not a long valley. On the contrary, in 2018, the problems often came on third-and-short.

In general, with freshman Adrian Martinez running the offense, the Cornhuskers showed signs they’re on the way to becoming a dynamic force in the Big Ten. In Frost’s first year, Nebraska was second (453 yards per game) in total offense in conference games, but won just three of those nine contests, partly because it placed fifth in points per game (29.8).

The Huskers were 85th nationwide in converting third downs (37.2 percent) in all games last season, and even worse (36.4 percent for 11th place) in conference games. That’s not quite well as the Huskers did under Mike Riley (37.6 percent) in 2017, although the Huskers ranked 89th overall that year.

More than once, Frost has mentioned his goal is a combination of Oregon speed and Husker power. What would the perfect mix look like? A perfect balance of 300 yards passing and 300 rushing three or four times this fall? That’s be nice, and it would be an early sign that Big Ten defenses just might need to start adjusting to Nebraska’s offense after all. I’m all for mountaintop experiences and 56-28 victories, but realistically, I’d settle for improved efficiency game after game.

How about a steady diet of 250 yards passing, 200 yards rushing, and a slight uptick in time of possession, along with fewer penalties and a much improved kicking game? You don’t need much more yardage than that if you can keep key drives moving and turn them into touchdowns. Too often last season, Nebraska piled up the stats by moving the ball between the 20s, but sputtered when it really counted. It’s evident that Frost needs to find a way to reliably convert short-yardage situations. Quite frankly, the Huskers were not good at it last year, despite better-than-expected production from Devine Ozigbo, an above-average power back.

So did Frost mean the Husker offensive line will someday be so overpowering that the Husker quarterback will be able to take a shotgun snap five yards behind the line of scrimmage and convert third-and-2 with little difficulty? Although Husker Nation would rejoice to see that day, it frankly would be asking a lot in Year Two.

Why not develop a basic package where Martinez lines up under center? That would diversify the offense a bit and create a better situation for a quarterback sneak. In fact, I wouldn’t be surprised if Frost has already done it.

First, there’s nothing wrong with being predictable on third and inches. Martinez should be able to sneak for a first down three times out of four.

Actually, there could be an element of surprise. Think about Martinez lining up under center on third-and-1 in the first half against Wisconsin this November …. then making a play-action fake, dropping back and hitting J.D. Spielman for a 40-yard gain. Or he could shift back out from under center, take a shotgun snap and run a read option.

Having Martinez line up under center once in a while not only improves his chances in the NFL Draft (barring serious injury, there’s no way he plays his senior season in Lincoln), it improves Nebraska’s chances on the field each Saturday. I’m not talking about changing the offense. slowing the pace and draining the clock. Likely it would work best to rush to the line of scrimmage and use a quick count, giving the defense as little time to react as possible. Just give the defense a different look. Merely having the capability of running plays from under center — even three or four out of 75 snaps per game — could make a difference. It sure couldn’t hurt.

If you have a foolproof center snap, that’s one thing. But Nebraska didn’t have that last year, not even with a senior at center. The Huskers’ overtime possession at Northwestern ended with a bad snap on fourth-and-1. This season, it’s likely Nebraska will start a redshirt freshman at center.

At the very least, it would be peace of mind to know the “victory formation” is foolproof. Last year’s final snap against Michigan State proved that taking a knee out of the shotgun can cause confusion. It took a quick reaction and athletic effort from Martinez to keep Tanner Farmer’s high snap from sailing 10 yards into the backfield where the Spartans could have recovered at the Husker 25-yard line and set up a game-tying field goal.