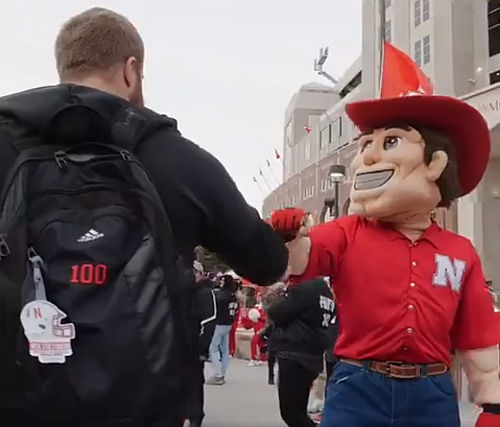 In the Northern Great Plains, inclement weather inevitably collides with football Saturday, although not as often as we might think. Before Nebraska hosted Illinois on a windy, wintry day, I departed from my usual pregame surveyor 100 Husker fans, and went out in search of their bad-weather game stories.

Most years, Lincoln experiences temperatures in the 20s or 30s in November, and often the wind chill makes it feel even colder. Toss in a dose of cold rain, or a dusting of snow, and you have the humble beginnings of a “man against nature” plot that makes the stories more memorable.

The 1993 Oklahoma game in Memorial Stadium received the most mention during my interviews on this day. Twenty-five years ago, the Huskers were in building a school-record home winning streak, and undefeated as they set out to clinch the Big Eight championship against their old rivals, the Sooners. Snow had fallen earlier in the week, and made for a frozen footrest, although game day itself was clear and sunny. Nebraska punched out a 21-7 win in subzero windchill, and Chuck Petrmich of Elkhorn remembers it well.

“It was cold as all get out, but we had a great time,” Petrmich said.

Bill Daily of Elkhorn and Scott Jackson of Columbus also remember the biting cold that day. “I think it was a 12-degrees-below-zero wind chill and I was in the south stands, facing that north wind,” Jackson said.

Daily recalls having an even better time a year earlier, on Halloween 1992, when Nebraska hammered Colorado 52-7 in a cold rainstorm.

Cold rain and wind were the order of the day on Nov. 29, 1991, another Nebraska-Oklahoma clash where the Husker came from behind late to win 19-14. Much of Nebraska was hit by an ice storm that day, with Lincoln barely missing the worse of it. “It was hell trying to get home that day,” said Ben Whitbeck Sr. of Columbus.

Whitbeck was cold and wet more than once that year. Surprisingly, his most vivid memory came at the 1991 season opener against Utah State, a 59-28 Nebraska win. During the first quarter, a heavy rain fell while the sun was shining. Then the game was delayed 19 minutes by lightning.  University students frolicked on the wet field while the teams went to the locker rooms and Husker fans crowded the exit ramps to get out of the wind, rain and lightning.

“People were hanging onto those metal railings, trying to get to shelter, while the lightning was flashing,” said Scott’s wife, Jeanette Jackson. “Kids were playing on the field, sliding around in the water.”

Whitbeck recalls being thoroughly soaked as he walked back to his car, so he decided to take drastic measures before getting in the car and heading home to Columbus.

“I was so cold and wet that I drove home in my undershorts,” he said.

Scott Jackson also recalled the 1986 Kansas State game, where Memorial Stadium turned into a snow globe for the first half of NU’s 38-0 victory. Groundskeeper Bill Sheppard did his best to clear the field at halftime with a tractor and blade.

“I had a sweatshirt on, and I kept my hands warm with Runzas,” Scott Jackson said.

Four years earlier, Nola Swenson of Hooper remembers the icy coldness of the late November clash with Oklahoma in 1982, a 28-24 Nebraska victory that featured the “Bouncerooski” — a lateral from quarterback Turner Gill to wingback Irving Fryar, who threw a pass to tight end Mitch Krenk for a first down. When the Huskers clinched the win with a last-second interception, students swarmed the field, and Swenson found herself in the on-field melee.

“It was wall-to-wall people on the field, and pretty soon I saw a goal post go by,” she said.

Her daughter, Maggie Swenson, played clarinet in the Husker marching band during Iowa’s 28-20 win over the Big Red in 2015, another subfreezing game where icy snow filled the stands.

Some fans couldn’t point to an exact date, but they knew cold when they felt it.

“There was always bad weather when we drove to Iowa State,” said Mike Wiese of Grand Island. “It could be nice when we left Lincoln, but when we got to Ames, it was always like the North Pole there.

He said he was surprised at the lack of cold weather games in the 21st century.