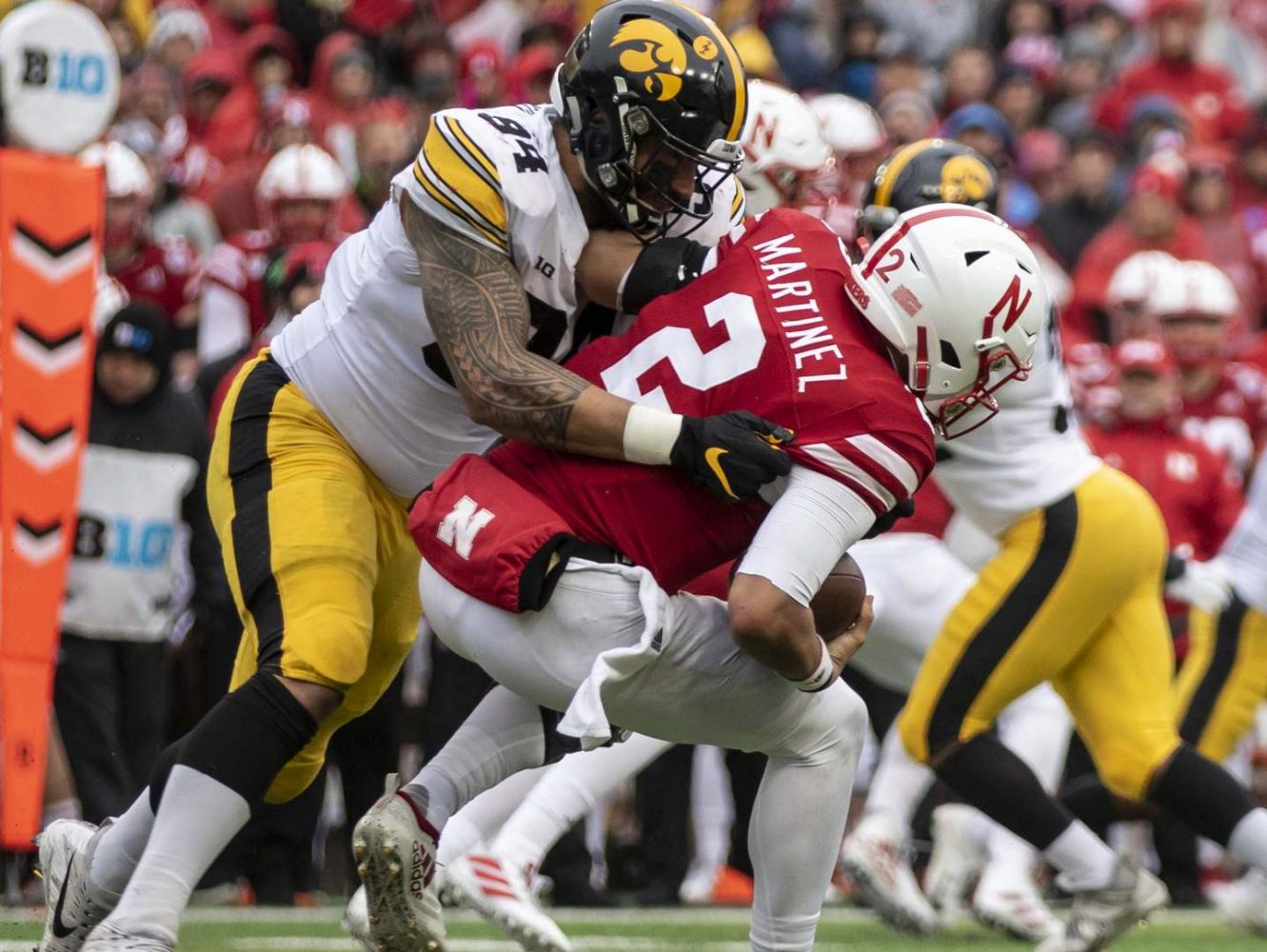 A season-ending game against a rival with a bowl bid on the line is a great time to ramp up your performance in the second half and rally from a 14-point deficit to tie the game.

It’s a lousy time to make bad decisions. But two boneheaded miscalculations — one by a coach, another by a player — made the difference in a 27-24 loss to Iowa, offsetting a fine second-half comeback by Nebraska and left it on the outside looking in once again. The Huskers are staying home in December for the third year in a row, in a year they badly needed 15 extra bowl practices to prepare for 2020. It’s largely because they can’t close the deal in close games, and that was the story once again on Black Friday.

Back in July, Scott Frost and Adrian Martinez were the main reasons that many media types predicted that Nebraska would win the Big Ten West. But two years into their Husker careers, Frost the coach has yet to prove he can make the difference with his play calls and player management, and Martinez the quarterback has shown he’s just as likely to turn the ball over as he is to get his team into the end zone. That’s the main reason Nebraska finished 5-7 (3-6 in the conference) in 2019.

NU’s fifth consecutive loss to Iowa started out looking like it would be a walkover. In the first quarter, the Hawkeyes followed their recent pattern, which goes something like this: Do a lousy job rushing the football against the rest of the Big Ten. Then stuff the ball down Nebraska’s throat with your running game.

Ihmir Smith-Marsette, a 6-foot-1, 183-pound wide receiver, scored on a 45-yard reverse on the Hawkeyes’ second series, circling left end for an easy score when Husker outside linebacker Caleb Tannor abdicated his outside containment responsibilities.

Iowa ran the ball 10 times for 152 yards and two touchdowns and led 14-3 after one quarter. They would get only 73 more rushing yards the rest of the game.

That’s where Nebraska’s first soul-crushing bad decision came in. In the second quarter, after cornerback Cam Taylor-Britt put his team back in contention with a 38-yard pick-six, the Huskers’ Barret Pickering kicked the ball deep to Smith-Marsette, who returned the kick 95 yards for a touchdown, immediately dousing the Huskers’ momentum. Yep, exactly the same thing that happened against Wisconsin. I wonder if anyone on the Husker coaching staff thought about that.

Pickering had successfully pooch-kicked on two previous kickoffs. Why even consider kicking the ball long?

By process of elimination, I assume Dewitt made that call. In the postgame press conference, Frost said he didn’t know why the Huskers kicked long, although he said, “We went into the game not wanting to kick to them.” You’ve got to assume Dewitt knew the pregame strategy, as did Pickering. Yet someone chose to kick long regardless. That points to Dewitt, whose main responsibility at that moment was making sure the kick was executed properly. Did Dewitt think he had permission from Frost to override the game plan?

Needlessly down by 14 points at halftime, Nebraska fought back admirably to tie the game in the third quarter, which had been a disaster all season for the Big Red but was their crowning achievement against the Hawkeyes.

Going against a 15-mph wind in the fourth quarter, the Husker bogged down on four consecutive drives, as Kirk Ferentz patiently played field position football and hoped the Huskers would make a critical mistake (a strategy that Big Ten teams have used since 2011). It worked — again. And again, the mistake was a mental one.

With the game on the line, Chinander’s defense forced a fumble, recovered by Taylor-Britt at the Husker 39-yard line with 2:32 remaining. Martinez and the offense had the ball with a chance to win the game, or at least take it to overtime. A questionable illegal block call on Mike Williams stalled the drive, but NU still had a chance to run out the clock. At that point, Martinez proved that 21 starts have not been enough to turn him a into savvy Big Ten veteran.

On second-and-20 from his own 34-yard line, with under a minute left in the game, Martinez ran a quarterback draw, cut sharply to his right, and could gain only a yard. Instead of staying inbounds and killing the clock with one more running play, Martinez inexplicably ran out of bounds with 45 seconds left, doing the Hawkeyes — who had only one timeout remaining — a huge favor.

As Big Ten Network play-by-play announcer Kevin Kugler said, “If you’re running that play, what you’re essentially saying is you’re trying to think about playing for overtime at that point, and if you run out of bounds, you’re certainly not helping your cause.”

Frost could have spared Martinez that mistake by simply deciding to bleed the clock and play for overtime, but he didn’t.

Now it was third-and-19 from the Nebraska 35. Iowa burned its final timeout after the Huskers’ next play. After a punt, they took over at their own 26-yard line with 32 seconds in the game. They had just enough offense left to move the ball into field goal position for their dependable placekicker, Keith Duncan, who earlier in the game had tied his career best with a 49-yarder. This time, he lined up for a 48-yarder with six seconds left.

Duncan actually was good from 48 yards twice; the first was nullified by a Husker timeout. But he did it again when it counted, frustrating Husker fans who stayed in the cold and misty drizzle all day long, yelling their lungs out. Duncan disappointed bowl promoters in New York City and Detroit, who for a while had visions of tens of thousands of Husker bowl game travelers dancing in their heads.

The Husker defense played admirably throughout the second half, giving up only four first downs and 122 total yards. Two of those first downs and 44 of the yards came on two crushing 22-yard pass plays on the Hawkeyes’ final drive.

You can’t blame Erik Chinander for this loss. In fact, Chinander was the main reason Nebraska came back to tie the game. His defense scored a touchdown which could easily have been the difference if the Huskers had played their cards right on the subsequent kickoff. If Chinander has anyone who can rush the passer against a decent offensive line, the Huskers likely win this game.

Instead, Iowa has that game-changer. A.J. Epenesa had two sacks and five tackles for loss. Sure to be named first team All-Big Ten next week, the junior defensive end had 14 tackles and dominated the game. Nebraska has nobody close to his skill level.

The Huskers’ horizontal passing game didn’t work under Bo Pelini or Mike Riley, and it rarely works under Frost. Against the Hawkeyes, bubble screens and running back screens lost more yards than they gained, as Iowa linebackers and defensive backs either overpowered Husker receivers’ blocks or eluded blocks by pulling offensive linemen. Nebraska simply loses too many one-on-ones. With Epenesa rushing the passer, the Huskers rarely had time to drop back and throw the ball.

A closer look at the quarterback position is in order. I thought Martinez would be a big-play machine this year, but I was wrong. Martinez can be a playmaker, but rarely in the red zone, A quick look at his touchdown passes-to-interceptions ratio (10-to-9 this season and 27-to-17 counting his freshman year) confirms that. A quick look at his career record as a starter (9 wins, 12 losses) confirms that. Martinez regressed as a quarterback this season, often playing like his mind was elsewhere. After 21 games, he’s mediocre at best as a decision maker.

On only two occasions Friday against Iowa was Martinez close to making a big play. He delivered once, on fourth-and-6 from the Iowa 29 late in the third quarter, when he hit Kade Warner on an 11-yard crossing route to extend the Huskers’ final touchdown drive to tie the game at 24. The other was the interception on the long pass to Jack Stoll at the 5-yard line in the final minute of the second quarter, when he hesitated too long before turning the ball loose. Martinez’s sophomore year was the Year of Hesitation.

At this point in his career, Martinez is Jammal Lord without the burst, without the dependability and without the toughness. Nagging injuries may be partly responsible, but that just serves to illustrate Lord’s superior durability.

McCaffrey will push him hard for his starting job in the spring. McCaffrey is a more explosive athlete. He’s young and inexperienced, but can you really give the edge to Martinez as an older, steadier option? Martinez is not exactly a top-notch decision maker. He’s extremely turnover-prone. Let the quarterback controversy commence.