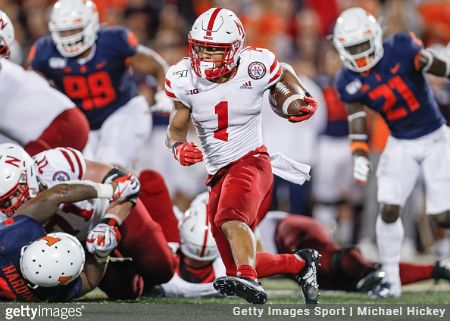 Parents of adolescents, you’ve lived out this more than once, so the Nebraska-Illinois game must have seemed like a rerun of your latest excruciating late-night anxiety. I can see your deeply furrowed brows. I knew there was no way you’d nod off in front of your big-screen TV — not on this night. You sent more than a dozen text messages to other nervous parents, didn’t you? I heard your sigh of relief when the clock hit 0:00. This young Nebraska offense was not quite ready to go on the road. But it went anyway, and it came back a winner. Barely.

In a precarious 42-38 decision over Illinois, the Huskers played with all the gusto of a 16-year-old who just got his driver’s license, and has no idea of the trouble he could get into. The precocious Huskers ran wild — dangerously wild — veering all over the road and barely keeping it between the white lines. Time and again, the members of the offensive unit put their comrades on defense in a bad position with untimely penalties, or fumbles at the worst possible places on the field. But they’re headed in the right direction.

This is a team that plays hard and desperately wants to win, yet still reverts to bad habits far too often. It is not completely convinced it’s ready for the big time, but keeps trying its doggondest to get there.

You’ve got to love this erratic adolescent of a Nebraska football team. You’ve got to be scared to death at some of the undisciplined things it does, as well you should, but it’s going to be dangerous. In fact, it’s dangerous right now.

After trailing 14-0, 21-7, 28-14 and 35-21, the Huskers burned rubber, came all the way back and brought home some notable cargo — the 900th victory in the history of the Nebraska football program — although they barely got the car into the garage by curfew, just a week ahead of Notre Dame and Oklahoma, who are sitting on 899 apiece. Nebraska is the fifth school to make it to 900.

Scott Frost’s first road win since returning to Lincoln was not the way a teenager’s father would prefer to draw it up. The Huskers scraped up against the guardrail way too often. They consumed huge amounts of fuel, and it’s no wonder: they were driving uphill all night long. They handed the Illini 21 points on four turnovers. They overcame 11 penalties for 119 yards. They overcame a shoddy kicking game. They overcame a series of nagging injuries, the most serious to Maurice Washington, who did not play in the second half, yet still had 89 yards rushing.

The Husker offense surpassed 300 yards rushing and 300 yards passing in the same game for only the second time in history, and it felt like it left points on the field.

Meanwhile, the Husker defense got off to wretched starts in both halves, when Illinois gashed them for long touchdown runs. Yet the Blackshirts had seven three-and-outs, including the four-and-out at end of game, getting that last stop that eluded them so famously last October against Northwestern and two weeks ago in Boulder.

Nebraska is 3-1 heading into next Saturday night’s Ohio State game, and it’s possible to envision almost anything happening at Memorial Stadium in front of a crowd that most assuredly will be ready to infuse their team with endless raw emotion as long as the game is in doubt. Like most relieved parents, fans throughout Husker Nation know their team almost didn’t make it to this spot.

“We are where we are,” said Frost, who looked a bit frazzled in his postgame press conference. “We could easily be 4-0 and rated in the Top 15. We could be 2-2 and people would say that nothing has changed. But we’re a lot better than we were Week 1.”

With an abundance of miscues plaguing the Huskers, it’s a good thing Wan’Dale Robinson was right where he was. This was the night Robinson came of age.

Frost turned Robinson loose. He caught eight passes for 79 yards and two touchdowns, rushed 19 times for 89 yards and another score, and most importantly, never turned over the ball even though some of his more experienced teammates did. There’s no way the Huskers would have won this game without the true freshman from Kentucky.

Also standing tall was sophomore quarterback Adrian Martinez, who lost two more fumbles, but put them behind him and led his team on four long touchdown drives in the second half and a fifth that, although it scored no points, chewed almost five minutes off the clock. Martinez completed 22 of 34 passes for 327 yards and three touchdowns, and led his team in rushing with 118 yards on 18 carries. In a postgame interview on the Husker Sports Network, Martinez several times talked about his teammates being “steely eyed” under adversity, which was a fair assessment. Still, the fact remains, the Big Red made things much tougher on themselves than they really needed to.

Martinez seemed to gradually warm to the idea that he could change the game with his legs. He started running with authority in the second half. For the 10th time in his career, he exceeded 300 total yards in a game, and less than halfway through his sophomore season, is closing in on Nebraska’s all-time record in that category.

For the first time in ages, Nebraska wore down an opponent in the fourth quarter. The Illini defense was running on fumes at the end. The Huskers ran 98 plays from scrimmage and won the time of possession battle by a wide margin, which left the Blackshirts fresh enough to slam the door on the Illini with three-and-outs on the last two possessions.

This team doesn’t look disciplined enough to stand in there and play four quarters with West Division rivals Wisconsin and Iowa. Then again, it looks like a team that, given the right set of circumstances, could give all kinds of problems to anyone. That includes Ohio State, which boasts the Big Ten’s most prolific offense and quarterback, but will be relatively untested although firmly entrenched in the AP Top 10 when it rolls into Lincoln.

Are they ready for the hype that comes with hosting ESPN’s College Gameday? It’s going to happen for the first time in 12 years when Ohio State comes to Lincoln. We’ll find out a lot that night under the bright lights. Sometimes you’ve just gotta turn the kids loose, let ‘em play, and live with the consequences.