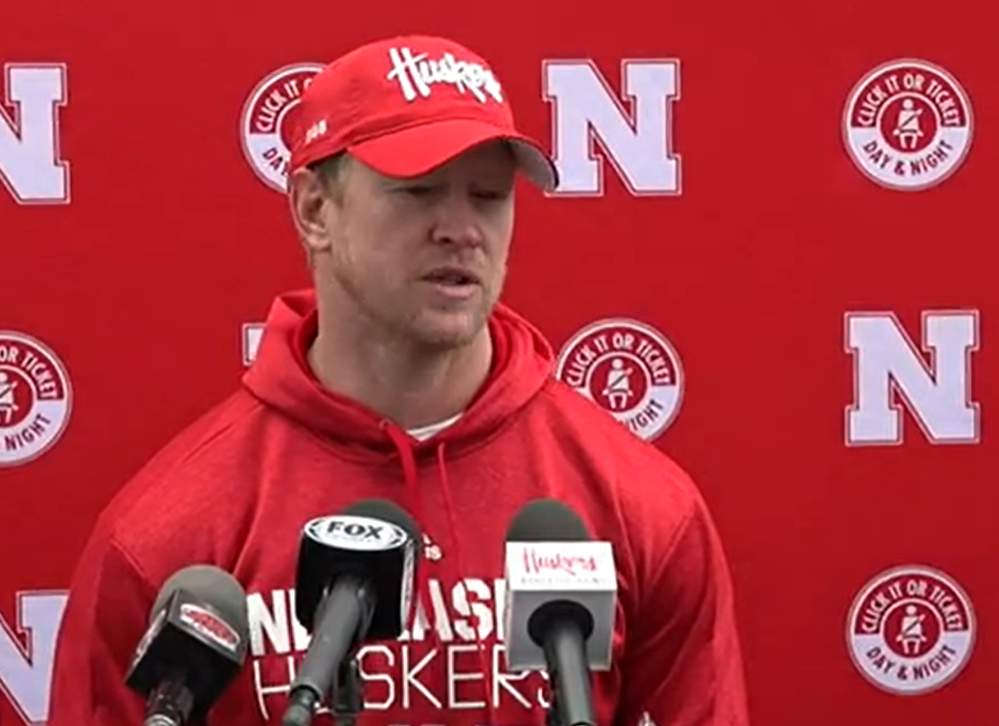 Back in August, Nebraska was a narrow favorite for the Big Ten’s West Division title, and Husker quarterback Adrian Martinez was one of the main reasons for that line of thought.

Man, does that ever seem like a long time ago.

The Cornhuskers’ gut-wrenching 31-27 defeat at Purdue — Scott Frost’s eighth one-score loss at Nebraska — was the latest chapter in their retrograde march through the Big Ten. In their second year under Frost, the Huskers are unlearning everything they figured out about winning football games at the end of the 2018 season. Last year’s team went 0-6 in the first half of the season and came back to win four of its last six. This year’s team is on track to do just the opposite — win four of its first six, then go 0-6 in the back half.

Embed from Getty Images
Nebraska’s defense was confused and out of position much of the game, including the Boilermakers’ game-winning touchdown on a reverse by freshman David Bell.

Nebraska found yet another way to lose a close game — this time, to the Big Ten West’s sixth-place team playing without all-conference slot receiver Rondale Moore and its first-string quarterback, Elijah Sindelar.

It’s hard to believe that Nebraska succumbed to 2-6 Purdue in a game where it enjoyed a big advantage in field position, while going plus-one in turnover margin, blocked two punts and was called for seven fewer penalties than the Boilermakers.

Ironically, Saturday at Ross-Ade Stadium, Martinez was the main reason Nebraska lost to an undermanned but well-coached Boilermaker squad.

Yes, Martinez led a couple of fourth-quarter touchdown drives, but it was too little, too late, after he frittered away several opportunities to build a commanding lead in the first half.

Leading 10-0 with a first-and-10 at the Purdue 21-yard line, Martinez locked in on J.D. Spielman, who ran a wheel route down the right sideline. Ignoring an open checkdown pass to tight end Jack Stoll, Martinez forced the ball into double coverage, and was picked off by Purdue safety Cory Trice.

The Huskers immediately got another chance when Lamar Jackson intercepted a pass at the Purdue 46. But on third down, Martinez overthrew Kanawai Noa, who was wide open for an easy touchdown. The Huskers had to punt.

In all, Nebraska scored only 10 points on seven drives that reached Purdue territory in the first half. That turned out to be the difference. Coming off a month-long recuperation from a knee injury, Martinez was erratic all game long. Most alarmingly, he continued his season-long pattern of tenative play and slow decision-making.

Martinez was 22-for-39 with one interception and no touchdowns. He is getting less accurate and less decisive as his sophomore season goes on. It was a performance that made you long for the days of Tommy Armstrong Jr.

Martinez mirrored Armstrong’s erratic arm (several times throwing short passes into the dirt at his receivers’ feet, including the final minute on the Huskers’ last drive of the game), but without his big-play-in-the-clutch capabilities.

It would be wrong to put all the focus on Martinez. Coach Scott Frost and defensive coordinator Erik Chinander bear a large part of the blame for this loss.

With Nebraska leading 7-0, Darrion Daniels intercepted an ill-advised Purdue screen pass and returned the ball to the Boilermaker 2-yard line. For some reason, Frost decided not to run the ball, as he successfully did on the Huskers’ previous scoring drive. Instead, he called a shovel pass to Wan’Dale Robinson, which failed when Martinez hesitated and tossed it late. Then he forsook the run a second time, and Martinez was sacked for a 5-yard loss. Two plays later, the Huskers settled for a short field goal by Barret Pickering. Those four missing points grow larger with each passing hour.

If Frost has lost all confidence in his offensive line — which is certainly a plausible theory — why did he run the ball (successfully) twice from the 3-yard line earlier in the game? I don’t understand Frost’s reluctance to hand the ball to Dedrick Mills near the goal line, especially after Mills scored his eighth rushing touchdown of the season.

Nebraska is one of the worst teams in the nation at red zone efficiency. The Huskers will not be a threat in the Big Ten West until they have a running game that can convert short-yardage situations with consistency.

Meanwhile, after a promising start, Chinander’s defense came unraveled over the game’s final 45 minutes. To say the Huskers were out of position and sloppy at tackling would be an understatement. It’s a rare thing to see Nebraska defenders consistently flying to the ball and gang-tackling.

Purdue coach Jeff Brohm took a quarter to figure out Nebraska’s defensive scheme, then spent the rest of the game schooling Chinander, who never found an answer for Purdue’s short passing attack. The Huskers even knuckled under to the feeble Boilermaker running game, which entered the day averaging just 68 rushing yards per game. The Huskers allowed that many rushing yards to Purdue in the fourth quarter alone. Once again, Nebraska was not the stronger team coming down the stretch.

The Blackshirts proved they have learned very little about winning third down. Purdue converted 8 of 14, mainly on each of its four long touchdown drives — two in the second quarter and two in the fourth. Even the Boilers’ simple screen passes broke for big yardage.

A series of missed tackles by the Blackshirts proved fatal on Purdue’s 96-yard TD drive to end the first half, giving the Boilermakers a 14-10 halftime lead.

Amazingly, on Purdue’s last drive, if Chinander did anything at all to try to disrupt or confuse O’Connell, it was not noticeable. Chinander, with much more experience on defense than Purdue had on offense, played him very cautiously, as though he was afraid the third-stringer would beat him deep. With plenty of time to throw, O’Connell completed all six of his passes on the 82-yard drive.

Despite Frost’s emphasis on “no fear of failure,” the Huskers are consistently playing not to lose. They collectively peek back over their shoulder, as if convinced that yet another bad break will overtake them. They shrink from the spotlight. The Blackshirts, to a man, look like they hope someone else will step up and make a big play on third down.

The Huskers are not playing with passion. They are mirroring Martinez, and their tentative play is hard to watch. Meanwhile, Frost and Chinander are getting the worst of both worlds, losing three consecutive games while missing opportunities to get experience for their talented freshman class.

Since it’s unlikely there will be bowl game practices to build experience for Husker freshmen like Brice Benhart, Noa Pola-Gates, Rahmir Johnson, Ty Robinson and Nick Heinrich, why not give them each 15 to 20 snaps against Wisconsin? Let them see what top-level competition looks like. Frost has indicated defensive lineman Keem Green will play four games, which means he’s scheduled to play in the next three contests.

The most positive thing that can happen now is to get some experience for the younger players. Who knows, they may provide a spark that’s been missing since early October.