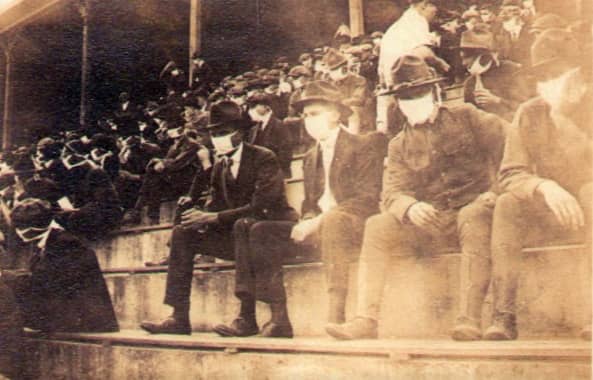 Fear certainly sells, and the Covid-19 pandemic has given the national media plenty of fuel to ramp up its fearmongering efforts. Unfortunately, the upcoming college athletic seasons, including football, could be disproportionately affected, unless decision-makers see through the one-sided narrative.

I’m not surprised that the media report sensational-sounding raw numbers without context, but I’m disappointed in the scientific community for letting them get away with it. Hopefully, the disingenuous silence by epidemiologists won’t be a major factor in the decisions to be made soon about the fall sports season. Then again, if their relative unconcern over the social-distancing violations of participants in nationwide “Black Lives Matter” demonstrations over the past month is valid, there’s good reason to dispute the proposed “empty-stadium” policies in all major sports.

One of the major roadblocks to effective management of the disease is the lingering widespread hope that a vaccine will wipe away this fearsome virus, so the best course of action is to hunker down until that distant-but-welcome day arrives. Considering the world’s lack of success in developing reliable vaccines for any sort of coronavirus, that’s not likely to happen. Not this winter, not next year, not a decade from now. Much more likely is the development of effective treatments to mitigate the long-term effects of the virus. So if you’re one of those folks who vowed he won’t go to the stadium until a vaccine is developed, you may never go to a large sporting event again. Obviously, people in high-risk categories should stay away. If, however, you trust your immune system or a medical treatment, you’ll be much more likely to buy tickets.

Bringing the subject home to Lincoln, Nebraska, let’s start with a fact: as of June 29, seven NU athletes and one staff member had tested positive for Covid-19, five of them football players. I appreciate the restraint of the Lincoln Journal-Star and Omaha World-Herald for avoiding this technically true, but misleading, headline; “Record Number of NU football players have coronavirus.”

Considering that more than 250 Husker athletes and staff have been tested, the rate of positive tests is below 3.2 percent. My first response? What good news! Somebody in the athletic department must be doing something right. But since Scott Frost recently revealed the fallacy that denying student-athletes the opportunity to play this fall will somehow protect them from the virus, this column will focus on fans in the stands.

Strangely absent from almost every national Covid-19 news story is a reference to the percentage of positive tests in any particular state. In other words, it doesn’t take a rocket scientist to realize that the more testing you do, the more positive cases you will find. At the end of June, Nebraska was 11th in the nation in positive tests per million, but that may be due to the fact that Nebraska has done a more thorough job of testing its residents than many other states. The Cornhusker State has tested almost 10 percent of its total population. Moreover, Nebraska’s percentage of positive tests has been steadily declining since mid-May. It stood at 10.6 percent at the end of June. Lancaster County’s positive test rate (6.6 percent and dropping) is much better than the state’s.

Consider Texas and Florida, both of which (media reports would have you believe) are “aflame” with the virus. In Texas, which has tested only about 6.5 percent of its total population, it’s true that the cases per million have trended upward sharply in the last couple of weeks, but Texas’s cumulative rate of positive tests was just 8.8 percent at the end of June. Florida, which has tested its residents at about the same rate as Nebraska, and whose rate of positives (8.0 percent) also looked relatively good at month’s end, despite its current upward trend. It will be problematic if Texas and Florida still haven’t stemmed the upswing a month from now, but at present, there’s no reason to panic.

If the Big Ten and national decision-makers take their cue from Frost, whose sober-minded, comprehensive assessment of the pandemic is refreshing, the chance for a relatively normal football season is good. Especially if they consider this: have you heard any prominent scientist or public health official complain or worry about the massive outdoor protests held throughout this nation for the past month? I have not. I’ve mainly seen stories about officials lecturing citizens for going to restaurants and bars and apparently getting lax in social distancing. So either there’s a political motive behind the science community’s response, or the public health consequences of outdoor gatherings and rallies in the age of Covid-19 are relatively nil.

Here’s some more good news about college football. We know that airborne transmission is much more likely than is surface contamination to spread the virus from one person to another. The games are played outdoors, and Nebraska has some of the nation’s most reliable windy conditions. Look for Power 5 schools to establish massive ventilation systems in their stadium concourses and restrooms. Also look for Power 5 schools to mandate that anyone entering the stadium must wear a mask.

There’s really no good reason to limit attendance at football games, that is, if you accept the logic regarding the recent demonstrations — many of whose shoulder-to-shoulder participants were breathing deeply and shouting loudly.

I have noticed only three types of reactions from media or scientists:

• Indifference/silence
• “It was OK because a lot of them were wearing masks”
• “The protests were justified and racism is a cause for coronavirus, so this is a good long-term health move”

Well, I don’t trust many national journalists these days, but since I have no compelling reason to doubt the opinions of epidemiologists, I’ll go along with them. I’d say that playing and attending sporting events, including major-college football, is a good long-term health move, because it will help safeguard our nation’s mental health by mitigating further job losses and economic disruption in families. If roughly the same percentage of people wear masks to outdoor football stadiums, the general population should be fine.

Frost is right: the coronavirus is here, and it will spread to a certain extent, regardless of whether we play football. What’s more, I would argue, regardless of whether people fill the stadiums, or go to a bar or their friend’s house to watch with a bunch of their buddies. I think the virus spread could actually be lower if people fill the stadiums, where masks should be mandated.

A personal note: by the time September arrives, I’ll be 60 years old, so I’m working my way into the higher-risk category. Yet my age group (55-64) has less than a 1-in-2,000 chance of dying of Covid-19. Am I going to avoid involvement with something I love, just because I have a 0.05% chance of dying from it? Not on your life. If I’m allowed, I’ll be in what could be a full Memorial Stadium press box — most likely wearing a mask — on Sept. 5.