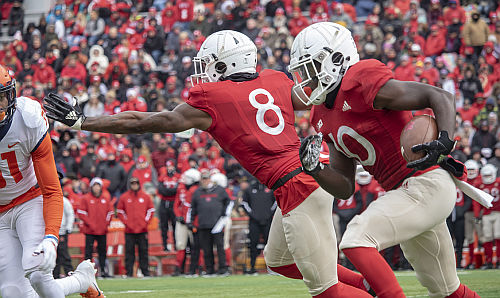 Scott Frost is making the transition from frustrated father to a proud papa.

No, I have no clue how his 1-year-old son is doing. I’m talking about who he deals with inside Memorial Stadium during Year One — the players he inherited and the players he recruited.

In the relaxed atmosphere of his postgame press conference, just for a moment, I thought Frost would pull out his smartphone and proudly show family photos of his up-and-coming kids to a roomful of slovenly-looking sports journalists. He sounded very much like a proud but self-aware father, realizing how prone he is to brag about his sons’ progress, how well they are starting to pick up the details of his system.

“People are probably laughing at me because I keep saying it’s our best week of practice,” he said, “but it’s true.”

The first half of the season, those kids aged him a decade. Now, in the second half, they’re putting a new spring in his step.

Take Saturday’s 54-35 victory over Illinois and combine it with the 53-28 win over Minnesota in October, and you’ve got a prototype of Frost Ball — a fast, balanced, multi-talented offensive machine, coupled with a few timely stops and takeaways on a less-than-stellar defense. For now, it looks a lot like it looked for two years at UCF. That is, at least, until he recruits more speed and athleticism for defensive coordinator Erik Chinander to work with. For now, after five takeaways against Illinois, the Huskers scored 24 points off turnovers and are almost back to dead even in turnover margin this season.

Will Frost’s attack work against the much better defenses he’ll face against Michigan State and Iowa? There will be no bowl game in 2018, so the 3-7 Cornhuskers have but two more chances to give us a glimpse of the future. One thing’s for sure — the youngsters on the Husker roster are highly motivated to send out the seniors with a pair of memorable efforts.

Frost has made no bones about the fact that his team has a long way to go, but he’s left little doubt that he fully intends to get there.

He inherited a mess, but pushed forward with optimism from Day One. He made some mistakes, but his style of tough love and discipline mixed with an unflappable brand of “It’s-going-to-happen” confidence, seems to be taking hold.

There was upheaval. There were struggles. There was an 0-6 start, culminating in the longest losing streak in school history. Some of his kids left for home. Others, like Stanley Morgan Jr. and Devine Ozigbo, stayed, battled through a tough transition and are having great senior seasons.

Ozigbo, who followed up a career-long 66-yard touchdown run in the second quarter Saturday with another 60-yard bolt in the fourth, is achieving far beyond anyone’s wildest dreams, except maybe his own parents’. He had 11 carries for 162 yards and three touchdowns, giving him 958 rushing yards and 12 touchdowns in 10 games this season and more than 2,000 yards for his career. He’s averaging 7.5 yards per carry, which is Rozierian territory, and he’s caught 17 passes for good measure. Ozigbo is on pace to become Nebraska’s first 1,000-yard rusher since Ameer Abdullah in 2014, and a legitimate candidate to be selected in the late rounds of next spring’s NFL Draft.

Morgan made eight catches Saturday for 131 yards and two touchdowns in windy, 23-degree conditions that improved slightly as the game wore on. For the season, he has 59 catches for 856 yards and seven TDs, and seems a good bet to hit the 1,000-yard receiving mark this fall and a mid-round draft pick next spring.

And, of course, there is freshman quarterback Adrian Martinez, a speedy, strong, humble, surprisingly mature and stunningly talented 18-year-old who can burn you with the pass with accuracy and slash you with the run.

On defense, Mick Stoltenberg stayed as well. The 6-foot-5, 315-pound defensive lineman missed half his senior season with nagging knee injury, but he was on the field Saturday, and scored a sack and an interception. He gave a postgame locker room talk that obviously left Papa Frost pleased as punch.

Native sons like Stoltenberg, Jerald Froster and Luke Gifford have done a lot to improve the locker room culture, but an outsider who appeared to be fading into oblivion a few weeks ago has become the catalyst to fuel a late-season surge. Lamar Jackson, who seemed to be the stereotypical highly-touted prima donna who never lived up to his hype, has suddenly become the poster boy for Chinander’s defense. Jackson could have left the team with Keyshawn Johnson Jr., Patrick O’Brien, Tristan Gebbia and the rest of Mike Riley’s Calibraska class, but he and Marquel Dismuke have stayed and battled. Jackson has two interceptions and seven passes broken up. Dismuke blocked a punt through the end zone for a safety, helping breathe some life into a moribund Husker punt return team.

It’s not how this team started, but how it finishes, that will define this year’s senior class and Frost’s first season. Buckle up for a stirring last lap.