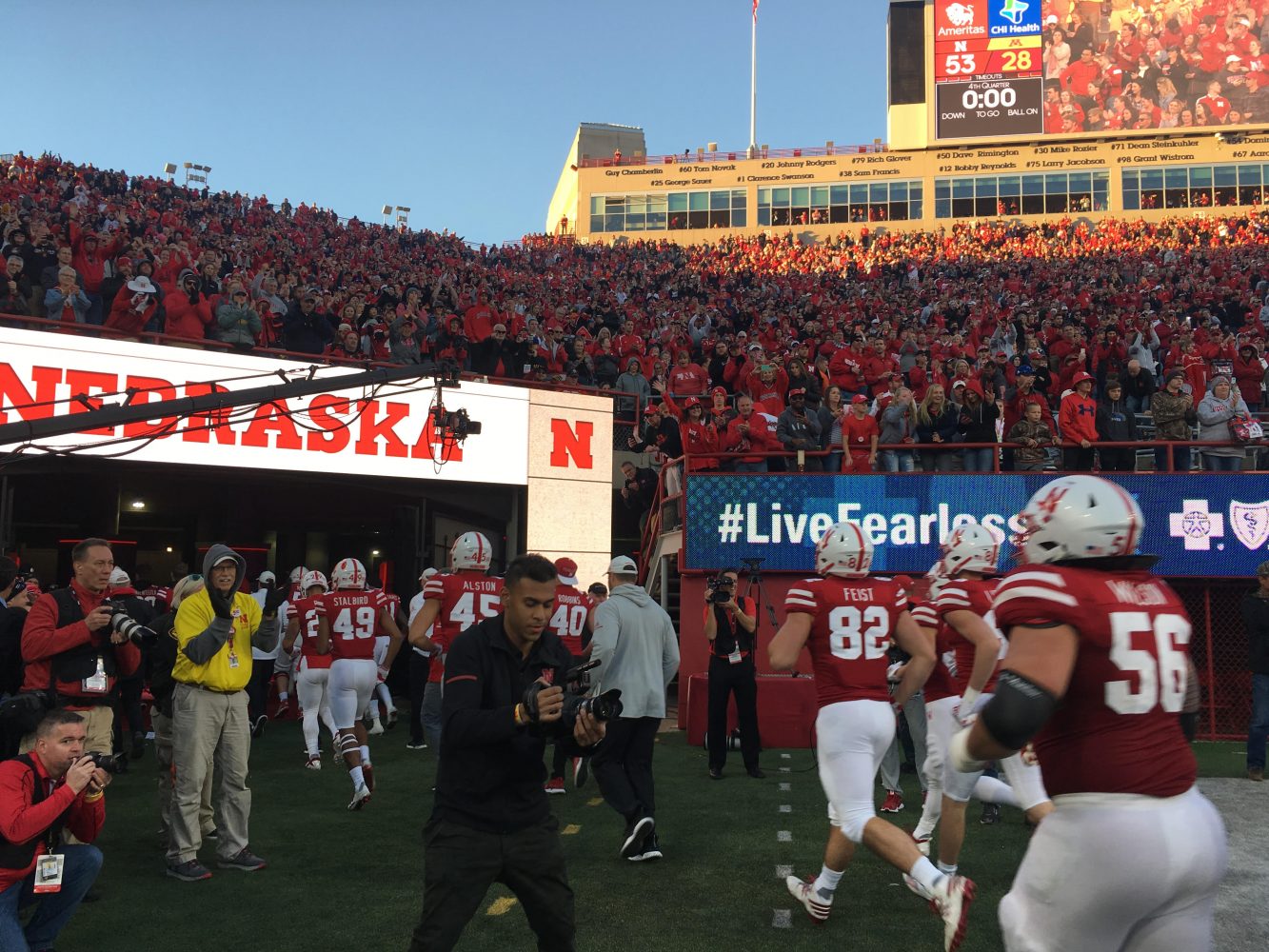 Tad Stryker
Husker fans celebrate a win over Minnesota.
By Tad Stryker on 10/20/2018

As dusk settled over Memorial Stadium at the end of a gorgeous October day, the remains of a long nightmarish winter melted away, leaving the sensation of spring as it settled over the Sea of Red while the clock counted down the final minutes to Nebraska’s 53-28 victory over Minnesota Saturday.

Long losing streaks aren’t supposed to happen at the school that has more all-time college football wins over current Power Five teams than any other. So Husker fans, who grew frustrated and impatient, but remained supportive throughout the ordeal, reveled in the moment. Most of the crowd of 89,272 stayed until the end, showering the Cornhuskers with cheers, celebrating the end of a 10-game skid that had grown heavier with each passing week, although several thousand Minnesota fans and a few Nebraska students left in the final minutes, along with what must have been a 10-ton gorilla who got off Scott Frost’s shoulders and reluctantly headed south off the campus.

A powerful offensive performance, fueled by freshman quarterback Adrian Martinez, senior running back Devine Ozigbo and senior wideout Stanley Morgan Jr., did the job. The Huskers piled up 659 yards of total offense, the most they’ve ever had in a Big Ten football game. But this time, they did it without paralyzing themselves with penalties and turnovers.

The Huskers got enough defense from Eric Chinander’s Blackshirts, including two key red zone stops early in the fourth quarter, to improve their record to 1-6 and flashing the potential to make the second half of the season a memorable one.

“It’s long overdue,” said Frost at his postgame press conference. “This is what it’s supposed to feel like. I just didn’t expect it to be in October, but we’ve got as good of fans as there is in the country. They’re loyal, they’re supportive, our kids appreciate them. They’re fighting hard for them. I almost teared up running off the field. That was a special moment.”

After two weeks of hearing Frost say his team had turned the corner and looked better at practice than he’d ever seen, Husker fans got to see the evidence themselves. Ozigbo was explosive early in the game, rushing for touchdowns of 40 and 59 yards on his first and third carries of the game for Nebraska, which shot out to a 28-0 lead.

Frost’s offense appears to be heating up. First time in more than 10 years, NU has exceeded 475 yards total offense in four consecutive games, and Ozigbo has rushed for 150 yards in three of the last four games. He led the way against Minnesota with 152 yards on just 12 carries. Martinez and freshman running back Maurice Washington also rushed for more than 100 yards.

Martinez had 401 yards of total offense, including 125 yards on the ground, which broke Tommie Frazier’s freshman quarterback season rushing record, and he still has five games to add onto it. He completed 25 of 29 passes for 276 yards and three touchdowns, and added a fourth TD on the ground.

Washington looked more confident each quarter, and finished with 109 yards and a touchdown on 14 carries.

Morgan caught a career-high 10 passes for 169 yards and two touchdowns, and J.D. Spielman became the first Husker to reach 100 career catches during his sophomore season, finishing with eight catches for 77 yards and a touchdown.

Perhaps most importantly, the offensive line looked better than it has all season, with no holding or illegal procedure penalties, if you overlook the one at the end of the first half where the Huskers sprinted upfield to try to spike the ball and set up a long field goal.

Nebraska had a penalty-free first quarter and committed just six for the game, compared to Minnesota’s eight. In fact, when the Gophers were whistled for holding in the first quarter, it nullified a touchdown — convincing proof that things just might go Nebraska’s way. On the BTN telecast, play-by-play announcer Kevin Kugler pointed out that it was the first time in 21 Big Ten games that Nebraska’s opponent had been called for holding, which would have been the Indiana game at Bloomington Oct. 15, 2016, near the end of Mike Riley’s eight-game winning streak. That should give conspiracy theorists something to talk about for the next week.

The Big Ten officials missed another clear violation at the end of the third quarter when Minnesota left tackle Donnell Greene nearly twisted off Luke Gifford’s head with a choke hold that he used to wrestle Gifford to the turf, but two big plays by sophomore cornerback DiCaprio Bootle helped put this game in the win column for the Big Red.

With the lead shrunk to 28-22 midway through the third quarter, and that cold, familiar queasy feeling settling over the stadium, and Frost thinking on the sidelines that “I’ve seen this movie before,” Martinez led a lightning-quick, four-play, 74-yard touchdown drive, highlighted by a pair of dynamic Maurice Washington runs of 22 and 11 yards, capped by a 35-yard touchdown pass to Morgan with 6:44 left in the quarter. A two-point conversion catch by Morgan made it 36-22.

That set up the Blackshirts’ two red zone stops, with Bootle right in the middle of both. On the first play of the fourth quarter, with NU leading 36-22, he broke up a fourth-and-goal fade route in the corner of the end zone to end a Minnesota drive.

Then Martinez and the offense showed they are capable of chewing some clock. They consumed more than seven minutes while moving 82 yards on 14 plays to set up a 32-yard field goal by freshman Barret Pickering with 7:53 left in the game.

With the Huskers leading 39-22, Minnesota returned a kickoff to the NU 13, but two plays later, Bootle deflected a pass on a slant route. The ball deflected off the helmet of a Minnesota offensive lineman and into the alert hands of linebacker Dedrick Young.

Two plays later, Martinez made a quick read under heavy pressure and hit Morgan all alone behind the Gopher secondary for a game-clinching 67-yard touchdown pass.

When Husker players start making good decisions and big plays in game situations, it breaks the cycle of self-destruction that shrouded the team since the season-opener was cancelled by severe weather Sept. 1. When Martinez, Ozigbo, Morgan and Spielman hit Minnesota with a few lightning strikes of their own, it ended the Husker football program’s long winter. With a huge weight lifted from the team, let’s see if there’s a dawn at the end of this problematic season.