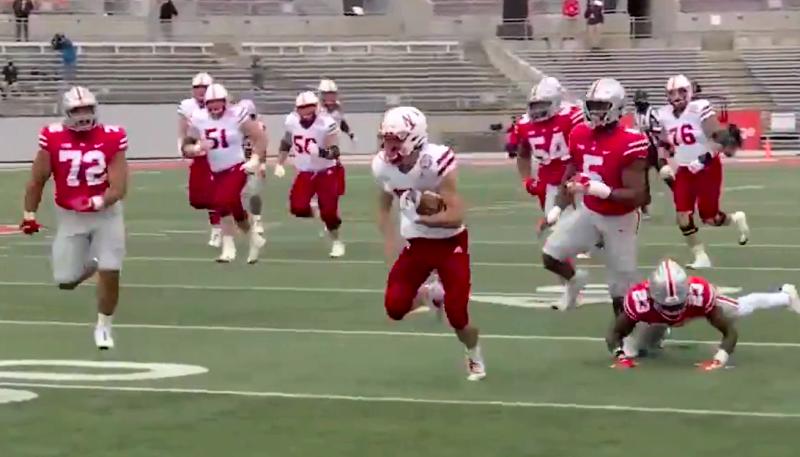 A generation ago, Tom Osborne watched his team deliver a 50-10 beatdown to Michigan State, then walked across the field to shake Nick Saban’s hand. And he delivered a message: “You’re not as bad as you think you are.”

I don’t think the 2020 Ohio State team will prove it is the equal of the 1995 Nebraska Cornhuskers, but the fact remains: the Buckeyes are blueblood upper crust, and their meaningless last-second touchdown sent a message that they’ll chase all the style points they can to get back in the College Football Playoffs.

Further, it’s doubtful that Scott Frost will build a legacy that challenges Saban’s anytime soon, but after a 52-17 loss at the Horseshoe Saturday, he seems to believe that he has an up-and-coming team.

Yep, it’s no longer the 1990s. At the start of Frost’s third season in Lincoln, Nebraska is the scrappy, dishevelled youngster fresh off the farm who grew six inches and gained 40 pounds over the summer, and went to town eager to challenge his well-bred, prep-schooled cousin to a fistfight. He landed a few satisfying blows, but found out that wild roundhouse rights usually lose to a well-disciplined series of jabs and counterpunches from a more experienced boxer, and that dropping your guard even for a moment can be disastrous.

Ohio State has polish, there’s no question about that, but at least Nebraska has grit, and you get the gut feeling the Huskers have a puncher’s chance against anyone else on their schedule. If you look at line play, there’s evidence to support that. That was not the case last season, when the Buckeyes were much more dominant in a 48-7 win in Lincoln.

We saw that the Huskers’ offensive and defensive lines have made significant gains in physicality. We saw Adrian Martinez and Luke McCaffrey line up in the same backfield multiple times, sometimes with McCaffrey taking the snap, and we saw the spark it gave the offense. We found out that the Huskers can move the ball against playoff-level competition. But we also found out that Cam Jurgens has not licked his problem with high snaps, and that Matt Farniok looked more at home inside at guard, but still gave up a sack and a critical holding call. I thought Brendan Jaimes looked solid most of the time, and Bryce Benhart had a pretty good debut at right tackle, including a key block on the Huskers’ first touchdown.

Looking for more optimistic signs? Promising redshirt freshmen like outside linebacker Nick Henrich and guard Ethan Piper saw some significant playing time. Nebraska’s running game shows promise, and the defense forced Fields to run more than he wanted. And Omar Manning did not make the trip. If the Huskers get a deep threat from Manning in coming weeks, the offense could open up significantly. He continues to be the mystery man of the early season.

The most promising thing about this game was the appearance of a pass rush. The Huskers had three sacks, and Caleb Tannor had one of them. Nebraska really needs Tannor to become a holy terror off the edge. The Huskers could rarely string together three solid plays on defense, at least not against a team as talented as Ohio State, but that could change.

The NU defense looked like it was playing for damage control much of the first half, and the strategy appeared to be working, even though Justin Fields completed pass after pass against soft coverage. Defensive lineman Casey Rogers finally got on the field and looked like the most improved player on the team. Rogers disrupted numerous plays, although he somehow was not credited with any of the Huskers’ six tackles for loss.

Nebraska gave a commendable effort, at least in the first half, but inconsistency continues to plague the Huskers. Nebraska started the season with eight penalties for 90 yards and two lost fumbles — one by each quarterback.

On defense, Ohio State lost several first-round draft picks, so its talent advantage was not as noticeable as in previous years. Yet it was still significant enough to stop NU drives if the Huskers made even one misstep (penalty, botched snap, missed assignment or negative-yardage play). Meanwhile, Ohio State’s well-refined offense overcome many similar setbacks to complete touchdown drives. Credit its Heisman Trophy candidate quarterback for much of that success. Fields completed 20 of 21 passes for 276 yards and a pair of touchdowns. He didn’t let Nebraska’s occasional pass rush success fluster him in the least.

Yet the 35-point gap was not a true picture of the game.

If Martinez doesn’t drop the ball while running unhindered on an option play with eight minutes left in the third quarter, and if he throws an easy touch pass to a wide-open Kade Warner in the end zone at the end of the Huskers’ next drive, the final margin could easily have been 17 points instead of 35, but Nebraska has a long way to go to change its national reputation as a team that talks much better than it plays.

Martinez and McCaffrey will likely continue to share time at quarterback, and that seems like the right plan to me. It was working well for almost half the game.

Nebraska had battled Ohio State to a 14-14 tie, when the defense held the Buckeyes to a short field goal at the 3:12 mark. At that point, the Huskers could have taken a halftime lead. Instead, in less than seven minutes of game clock time, Ohio State raced out to a 31-14 lead, and Frost took responsibility for a series of crushing events that started with a delay of game penalty after the kickoff. It was Frost’s worst moment of the day, and it seemed to take some life out of his team.

After the game, at least one Nebraska player said, “We have to get better at the little things.” This is an example. The Huskers have an experienced quarterback. Was Martinez distracted? Was Frost — in his fifth season as a major college head coach — also distracted? Nebraska had two timeouts left. It also had coaches in the press box. Offensive coordinator Matt Lubick is highest on the list of people who should have warned Frost, “Scott, the play clock is ticking down.” Only one of these people had to notice the play clock, and nobody did.

Ohio State made Nebraska pay dearly for its lack of focus. Without warning, it was lights out. Left jab, right cross, left hook, a series of body blows. Pretty much the same way the ’95 Huskers would have taken care of business. Suddenly, the country cousin was sucking wind and his bleeding profusely. The Buckeyes polished off Nebraska in the second half, the way a playoff-caliber team should.

“We’ve got to play smart as a team,” a relatively upbeat Frost said in the postgame press conference. “I was happy with how we competed. A ton of credit goes to (the Buckeyes). They have a lot of future pros on their team. At times, I thought our defense played well and battled. But we’ve got to get more stops than that, and our offense has to put our defense in better situations than that.”

Smart play against Wisconsin next weekend will be vital. The Badgers can be beaten, but they never beat themselves. The Huskers, on the other hand, will play the first half shorthanded, without two of their best defenders, because Cam Taylor-Britt and Deontai Williams were flagged for targeting fouls. The infraction by Williams should have been waved off. Even Urban Meyer acknowledged that on the Fox Sports postgame show, calling for the Big Ten to review the play and change the decision. Of course, that won’t happen.

Regardless, the hope is that taking a thrashing from its experienced prep school cousin will knock some of the numerous rough edges off the Huskers. Some refinement is in order for this gangly youngster, whose better days lie ahead.