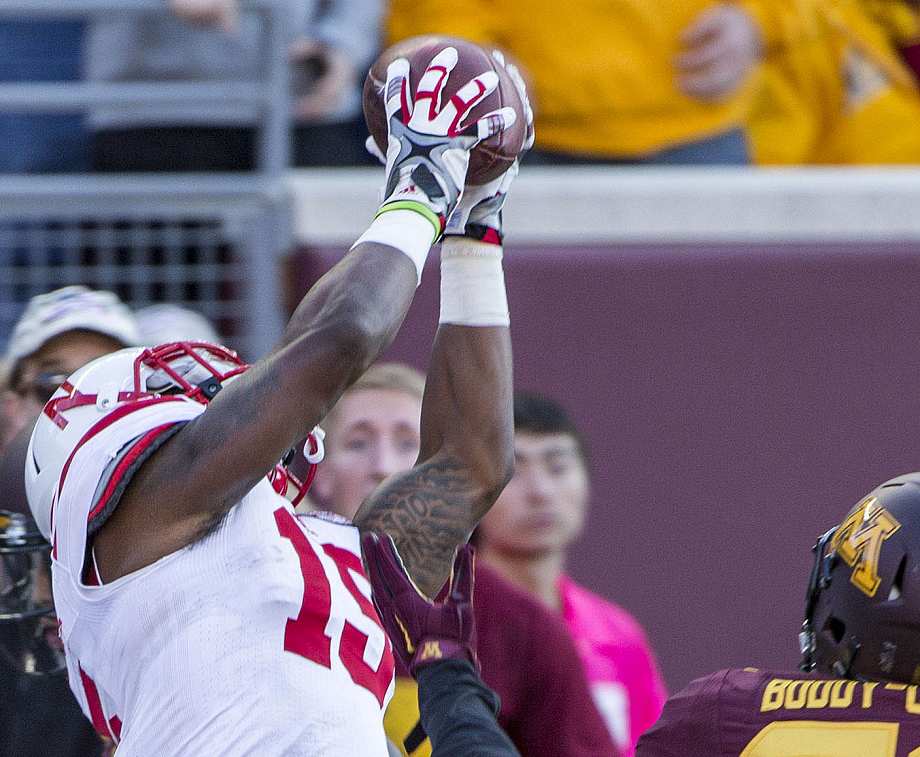 Jesse Johnson-USA TODAY Sports
De’Mornay Pierson-El pulls in a TD pass after tipping the ball to himself.
By Tad Stryker on 10/17/2015

Nebraska football fans still remember what a clean, consistent effort on offense looks like, and they were overjoyed to see one Saturday in Minneapolis. Making any conclusions beyond that would be premature, but there’s no denying that at least for one day, the Cornhuskers kept their focus, and took a step toward healing.

Is this the new normal – this curious absence of heartbreak? On a day when the other rookie Big Ten coach lost in a gut-wrenchingly inconceivable way, Mike Riley could finally finish a conference game with a smile on his face, as a few thousand Husker fans took over an abandoned enemy stadium and chanted “Go Big Red” with their team lining up in the victory formation.

Is this simply a brief respite during a painful losing season? Or did a light bulb just come on? I have no idea. The Huskers will pursue consistency as they roll through the last half of October.

One thing’s for sure – being on the right side of the turnover column and committing only two penalties will make things look a lot rosier on Monday morning. Let’s be happy with that for at least a week. But just as it was too early last week to judge whether Riley and his staff are in over their heads (as so many have charged during the past month), it’s also too early to proclaim that the Huskers have turned a corner.

Let’s look at what we know. Tommy Armstrong broke out of his passing slump. The junior from Cibolo, Texas, completed 18 of 26 passes for 261 yards and three touchdowns. He got away with a couple of risky throws, but completed 10 passes in a row at one point, and moved the chains when they needed to be moved. The Huskers averaged 10 yards per passiing attempt and started getting the ball into Jordan Westerkamp’s hands again. The offensive line took a step forward, Terrell Newby rushed for 100 yards and De’Mornay Pierson-El is on the verge of being a gamebreaker again, but Nebraska needs to get a lot of players healthy and is still looking up at .500. The Huskers got a lot of things cleaned up in the past week. Let’s see if they can sustain that kind of success.

It was mostly a day for the offense, but there was good news for the Blackshirts. The best signs were that NU’s run defense passed a significant test by shutting down a team that is committed to the run. NU held Minnesota to 65 yards on the ground, forcing Jerry Kill out of his comfort zone and making Mitch Leidner throw the ball more than anyone is comfortable with, although Leidner had a good first three quarters, hitting 17 of his first 18 passes against soft coverage. It’s merely a good indicator; the Gophers have a lot of injuries in their offensive line, just as Wisconsin did the week before. But at least the Huskers did not wear down this time.

The secondary continues to be suspect, giving up 301 yards passing to the Gophers, but Joshua Kalu returned an interception for a touchdown and Nate Gerry added another interception in the final moments to make Nebraska plus-three in turnovers for the first time since the Southern Miss game in 2013. The takeaway drought is broken. If nothing else, Nebraska’s defensive backs had a respectable fourth quarter.

Nebraska played its best football of the season late in the first half, pulling ahead 24-14 by finishing an eight-play, 75-yard drive on Newby’s 9-yard touchdown run and then getting a stop just before halftime. It got a little better in the third quarter when the Huskers moved 99 yards on 10 plays, using up nearly six minutes as they pulled ahead 31-14, then followed up by getting a three-and-out.

The Huskers stopped bleeding Saturday at Minneapolis. They stopped sinking, and started fighting their way back toward the surface. This season is badly damaged, but the Huskers showed signs that they may cause some carnage of their own over the next six weeks.

Formerly the sports editor at the North Platte Bulletin and a sportswriter/columnist for the North Platte Telegraph, Tad Stryker started writing for this website in 2008. You can e-mail him at  [email protected]. Stryker is a freelance writer, favoring topics related to Nebraska history or Christianity. You can buy his recent book at this link.