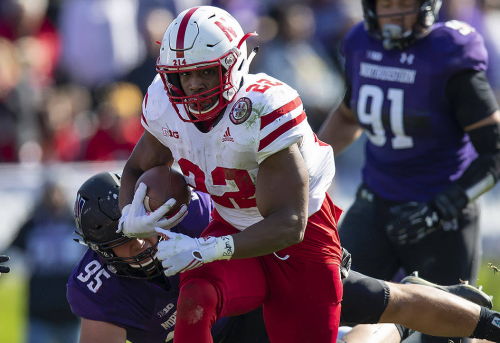 Courtesy of Huskers.com
Devine Ozigbo rushed for 159 yards against Northwestern.
By Tad Stryker on 10/13/2018

As Nebraska’s football family battles its way through unprecedented self-inflicted pain and suffering, there are no shortage of opinions on the best way to end it. And not all Nebraska fans are handling it well. You already know that if you listened to the postgame radio call-in shows. Nebraska’s dirty laundry is being broadcast throughout the nation. Some people look on with glee; others want to turn away but like a predictable but compelling horror flick, nobody can avert his eyes.

If this team can do one thing consistently, it’s finding new ways to lose. In fact, in the final five minutes of regulation and then, throughout overtime against Northwestern, they strung together multiple unlikely new ways to lose. Is it a coaching problem? Is it the players’ inability to execute? Yes on both counts. The way the players default to their learned self-destructive behavior under stress is truly astounding. The coaching staff has not found a way to break through that addictive behavior. But the coaching staff is suffering through a bad slump itself. It’s not all on the players by any means. It’s time for Frost and his staff to step up their game.

As someone who foresaw a much rosier first season for Scott Frost, I acknowledge my misplaced optimism, and now turn to some positive signs.

• The Huskers looked a little better in every aspect of special-teams play except for placekicking. Walk-on junior punter Isaac Armstrong was the coolest, most consistent Husker on this day.

• The offense turned in its season-best performance on third down, converting seven of 16 opportunities.

• Nebraska was improved in the red zone also, scoring three touchdowns and adding a field goal in five trips inside the 20.

• Senior running back Devine Ozigbo continues to show a lot of heart, and an improved penchant for making people miss. He gained 159 yards and two touchdowns rushing, despite spotty offensive line play.

And then there’s the laundry list of profound problems.

• The pass rush and pass coverage continues to worsen.

• Husker players’ addictions to penalties and turnovers are as strong as ever.

• The way those penalties happen at the worst possible time is hard to explain.

• The new offense is not reliable in short-yardage situations, at least not yet.

The series of events that adds up to an 0-6 start for Nebraska has been almost unbelievable. Nebraska added to that undesirable legacy on a gorgeous October Saturday at Ryan Field. How do you fritter away a 14-point fourth-quarter lead? When was the last time a team converted two consecutive fourth-and-10 plays? Why did Clayton Thorson pick this game to hit his career high of passing yards? This is simply one of those times when Nebraska fans will have to heed their school song and simply decide to stick together in all kinds of weather. In the absence of reliable offensive or defensive line play, that’s about all they can do.

Early in the week, Frost memorably said, “Sometimes you just have to puke it out.” That was an astute observation. At the time, we all thought the Huskers had finished puking. Well, we were wrong. And the illness seems to have spread to the fan base, if the tone of those postgame callers is any indication. There was a lot of vomiting going on Saturday afternoon throughout Husker Nation. OK everyone, get it out of your system.

The Huskers keep coming closer, without anything to show for it. There’s no sugar-coating this titanic Huskers collapse. They desperately needed a win to restore some confidence to the program. And the collapse will only add to a toxic mix of frustration and indecisiveness.

Or will it? How will this team respond? It could reasonably believe it took another step forward.

How will Husker Nation respond? Quite well, I predict. What other major college program would have 20,000-plus fans on the road to support an 0-5 team? The Huskers will play before a packed Memorial Stadium again next week, and I suspect the crowd will be extremely supportive as usual. The spotlight shines on Nebraska football no matter what, even in the face of a school-record losing streak.

Week after week, I’m more convinced this team needs a quality sports psychologist. It could also use more good players. Nebraska’s talent lags behind the Ohio States, Michigans and Wisconsins of the league, but is roughly equal to Northwestern’s or Purdue’s. Nebraska also desperately needs senior leadership, but since outside of Ozigbo, Stanley Morgan and Luke Gifford, very little seems forthcoming, Husker Nation would gladly settle for seniors who simply do their jobs. When a senior guard and team captain is whistled for moving before the snap on the game’s first play, it sets a bad tone.

What do the coaches need to change? Maybe some play-calling, for starters. But I think there are bigger issues. Frost and his staff have made a lot of good moves, and they deserve a lot of time to get the program turned around, but it seems obvious that Frost is about as bewildered by his move to the Big Ten as Bo Pelini and Mike Riley were before him. Frost has a lot of learning to do before he makes the rest of the conference worry about adjusting to his offense.

This is also a good opportunity for Frost to ponder how to make more progress on a stated goal — building an offense that combines Oregon speed with Husker power. A little more Husker power would have found a way to pound out a couple more first downs late in the game, which would have sealed the victory for the Big Red. But the main component to build Husker power will be another year or two of weight training for Husker linemen, currently the most obvious weakness on the offense.

Adrian Martinez showed how unfamiliar he is with doing what every NFL-caliber quarterback has to learn to do — line up under center and take a snap. Why not have a few set plays that you can run with confidence with the quarterback lined up under center? Have a few basic running plays, maybe a couple with an H-back as lead blocker. Have a few pass plays you run out of play action when the defense stacks eight men in the box. Frost and his team paid a huge price for not being able to execute a simple snap and quarterback sneak.

There is widespread second-guessing of Eric Chinander’s defensive scheme. In a game like this, that’s inevitable. He has not found a way to effectively disguise his blitz schemes. The opponent usually sees it coming, and is ready. The Huskers need a top-flight edge rusher, but they also need someone who can push the pocket up the middle. The current players are a step slow, arrive a split second late and commit frustration fouls.

Northwestern played much cleaner football than did the penalty-addicted Cornhuskers, who went on a fatal four-foul bender late in the fourth quarrier and overtime. But the Huskers are carrying an extra burden — Big Ten officiating crews are flagging Nebraska for every borderline call, and looking the other way when Husker opponents with better reputations commit similar transgressions.

That comes with being the Big Ten family with a bad name. Changing that reputation is not going to happen overnight.