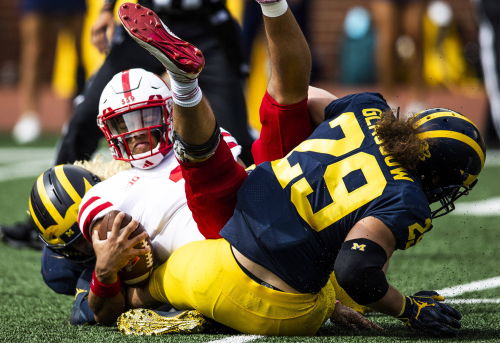 Nebraska Athletics
Adrian Martinez was sacked four times by the Wolverines.
By Tad Stryker on 9/22/2018

If the football gods smiled on Nebraska when Scott Frost returned, the start of the 2018 season shows they’ve also ordained he will be tested by fire to begin his career in Lincoln.

The first two losses of the season could be considered a fluke. Not so Nebraska’s 56-10 loss at Michigan Saturday, which was a thorough beatdown in every sense of the word.

Frost’s first UCF team may have outhit Michigan in the Big House in 2016, but his first Husker team certainly did not.

This a Husker team that obviously doesn’t have the speed, strength or quickness needed to compete with the best in the Big Ten East. It needs at least one more winter-summer cycle — maybe two — in Zach Duvall’s weight room before it’s physically ready for that.  It needs an exceptionally battle-ready offensive tackle to sign with NU this winter. And it needs some promising freshman skill position players to grow into dynamic sophomores.

Hopefully for Nebraska, Michigan is a legitimate threat to win the East. Regardless, Frost and his staff have a lot of tearing down and rebuilding to do on this fixer-upper we call the Nebraska football program. And it shows that a Frost-coached team is not immune to routs, at least not while it remains soft in the midsection.

Does that all seem a bit harsh? After all, with a bit of good fortune here and there, Nebraska could be 3-1 right now. But that would be fool’s gold. Instead, the Cornhuskers are 0-3 and heading toward a home date against Purdue that they absolutely must win if they want to sniff a bowl game. Maybe in the long run, it’s better to deal with the cold realities right up front.

Michigan dominated in the trenches on both sides of the ball. The result was disappointing and disturbing, but not surprising, at least not if you believe the Big Ten coaches who answer those anonymous surveys used by preseason college football magazines. Nebraska linemen have a bad reputation for a good reason. They simply are not winning their one-on-ones, and they’re easily confused.

The game was disappointing in that what briefly seemed to be the strength of the team — the defensive front seven — was thoroughly whipped by a Michigan offensive line that was considered questionable heading into the game. Nebraska was rated No. 20 nationally against the rush, allowing just 93.5 yards a game and 2.71 yards per carry, but the Wolverines ran the ball pretty much at will early on (they had 190 rushing yards at halftime), and ended up with 285 yards on 45 carries (6.3 yards per attempt). It would have been more, but coach Jim Harbaugh used the game as a varsity vs. junior varsity scrimmage to work on his team’s passing game that he knows he’ll need to compete with Ohio State.

The game was disturbing because it showed that very little progress has been made on the Huskers’ biggest long-term problem — the offensive line. You knew coming into the game that Nebraska would have trouble moving the ball on Michigan. But even so, an output of 39 rushing yards was crushing. Allowing four sacks and 15 tackles for loss was appalling. The o-line was helpless against a Michigan team playing the first half without one of its best players, Khaleke Hudson, who was penalized for targeting in the previous game. The Huskers have some talented wideouts and backs, but they’re being stymied by their porous o-line.

From top to bottom, Nebraska is not as disciplined a program as I thought it would be three games into Frost’s first season. Up front, it’s not as physical a team as I hoped it would be. And that starts with the three seniors right in the middle of the offensive line, Tanner Farmer, Jerald Foster and Cole Conrad. Foster and Farmer have been talking a good game, but now it’s time for them to let their on-field performance do the talking. The two sophomore tackles are playing no worse than the three seniors inside, and their collective lack of communication Saturday almost sacrificed freshman quarterback Adrian Martinez to the above-mentioned football gods. It seems to me that things go better with Conrad on the bench and Boe Wilson on the field. And aside from the improved play of the secondary, maybe the best thing about Saturday’s blowout loss was that the second-team offensive line finally got a couple of series.

The importance of the upcoming Purdue game can hardly be overstated. If Nebraska’s seniors want to be remembered for something more than a transition season, this is where they need to make their stand and start playing like seniors. It’s one thing to be overmatched by a team that has half a dozen future NFL players, but Purdue is not one of those teams. The big question is whether these Huskers have the mental toughness they need to shake off the start of the season, learn from their mistakes and gain momentum from here.

Can Nebraska break out of its’ maddening series of slow starts? Can it overcome its addiction to double-digit penalty games? Can it at least look competent on special teams? Can the highly-touted Tyjon Lindsay ever become a reliable part of the offense? He looked extremely timid on his muffed punt return in the second quarter. No capable major college punt returner hangs back and allows the ball to bounce twice on that kick. Is he really Nebraska’s best punt return option? It’s baffling that one fourth of the way through the season, the Huskers have been utterly unable to return punts or cover them.

On his postgame radio show, Frost named names. He said Dicapario Bootle, Mohamed Barry and Martinez gave top efforts and battled. “But we need more players to do that,” he said, “and we’re just not there yet.”

To defeat even a mid-level Big Ten team and prove you’re better than your 0-3 record, the football gods demand consistent play with effort across the roster, sustained for 60 minutes.