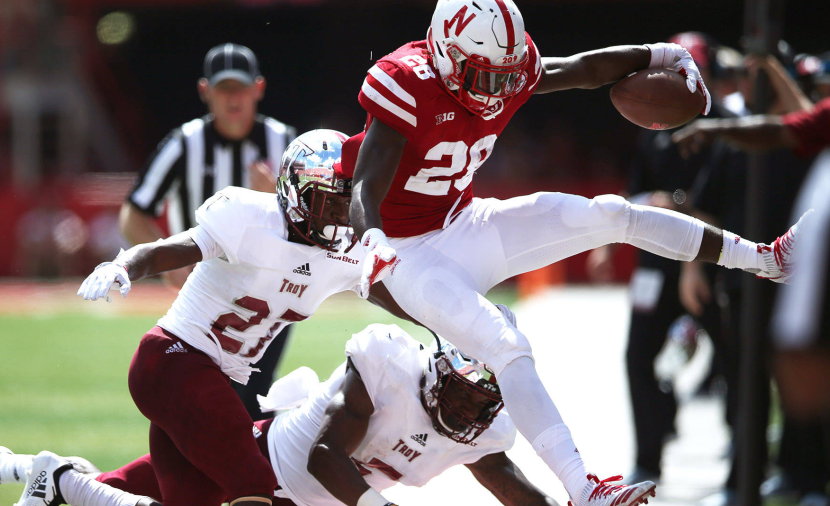 Courtesy of Nebraska Athletics
Maurice Washington rushed for 92 yards on 14 carries against Troy.
By Tad Stryker on 9/15/2018

A generation later, when Frost returned to the Cornhusker family, he and his coaching staff confronted a discouraging array of negative thought patterns, which today are playing havoc with Nebraska’s on-field performance.

Looks like it’s going to take more than a 12-step recovery program to break this cycle. But Husker Nation keeps filling Memorial Stadium and hoping for the best.

Rooting for Nebraska right now is like rooting for the family member who finally realized he’s deeply addicted to alcohol, and needs to work like hell to get sober. After detox, he’s better off for a while — until a stressful situation hits, or something goes wrong, when he defaults to his “pain medication” of choice. The booze in this case is penalties, turnovers, mental mistakes and erratic special teams play, something that has bled over form the Bo Pelini and Mike Riley eras.

It’s going to take more than a 12-step program to rehabilitate this football program. NU fans are going to have to endure the highs and lows that come with watching a loved one struggle to break addictions.

Having started its first two games by trailing 14-0 and 17-0, Nebraska has mastered the art of putting itself in stressful situations. And under stress, this team is making bad decisions and reverting to bad habits, just like the 2017 Huskers before them. But at least it’s showing more fight than the 2017 team, and that’s a start.

Frost said the effort he sees from this year’s team tells him they want to be great. But they have a daunting schedule ahead of them.

“We have a tough game next week, and this will get worse before it gets better, but it’s always darkest before the dawn,” Frost said. “I know where this is going, so I want every guy in that locker room to be on board.”

It’s one thing to get on board. It’s quite another to “un-learn” the destructive behavior. Just how much time will it take? That’s the big question.

With apologies to 18th-century writer and patriot Thomas Paine, who stared at a bleak situation early in the American Revolution and took up his pen, these are times that try the souls of fans who know what good football looks like. Now we get to find out who’s in it for the short term and who’s in it for the long haul. We’ll discover how much love and determination exist in the Husker family.

Frost can identify with Paine, who worried that under circumstances much more dire, Continental soldiers might choose to walk away from the fight.

“I just got done telling the team that when things get tough like this, you’ve got two choices; you fight back and you work even harder, or you give up,” Frost said early in his postgame press conference. “I also told them that if anyone doesn’t want to stay on board this ride with us, let me know now and he can get off. I know where this is going; we just haven’t had the results early that we need.”

It’s ironic that Nebraska has outyarded its opponent by more than 100 yards in each of its first two games, yet stands 0-2 going into next week’s conference opener at Michigan. Nebraska outplayed Colorado at the line of scrimmage for much of the game. Not so against Troy; this was more of a standoff. Freshman running back Maurice Washington rushed for 92 yards, much of it on his own efforts.

On a day when the Huskers needed their offensive line to step up and give their second-string quarterback a shot to win, it leaked at crucial moments. All too often, NU o-linemen were backpedaling and chasing their Trojan counterparts into the backfield.

When Frost walked off the field after his final home game in 1997, it was impossible to visualize that in a little over two decades, Nebraska would lose six consecutive home games. When Purdue visits on Sept. 29, it will have been more than a year since Nebraska won a home game.

For Husker fans who thought they’d already been through their own personal Valley Forge experience, this is not exactly what they had in mind. Some maybe wondering exactly how much patience this is going to take. There is more pain ahead for Husker Nation. No telling how much at this point, because like it or not, every Power Five school in the country — and a whole bunch of mid-majors — think they can come to Lincoln and steal a victory right now. The evidence is on their side. Nebraska is 0-2 for the first time since 1957, and has lost six consecutive games for the first time since that same 1-9 season near the end of Nebraska football’s Dark Ages.

But Frost is right when he said his coaching staff needs to work on changing his team’s habits — some of which are deeply ingrained. Luckily for Husker Nation, its new CEO also knows what good football looks like, and he’ll eventually get the right players in the right places.

Senior guard Jerald Foster said he and his teammates believe in Frost and the coaching staff, but the players need to work on the details of how they run plays.

“We’re going to figure out our detailing, because we keep hurting ourselves,” said Foster.

The most painful sequence Saturday against Troy came early in the fourth quarter with Nebraska trying to take its first lead. It illustrates that there is no isolated culprit in this losing binge. Indeed, breakdowns occurred at various places at various times.

Trailing 17-13, Nebraska started at its own 24, picking up one first down, then was held a yard short on three consecutive Greg Bell running plays. On fourth-and-1 at the Husker 43, Frost, having watched his team give up a punt return for a touchdown in the second qurter and play uphill the rest of the way, decided to try the field position game himself. However, normally reliable Caleb Lightbourne hit a wobbly 24-yard punt that handed Troy excellent field position once again.

The Trojans, who at the end of three quarters were only 1-for-8 on third down, tore out Nebraska’s heart by converting three consecutive third-and-9 situations. The first came on a 13-yard sideline pattern. the next was a defensive pass interference penalty. The third was a quarterback draw that broke clean up the middle for 17 yards when none of the Huskers could get off a block and make a play.

Two snaps later, B.J. Smith dashed 26 yards untouched for his second score of the day. With Troy leading 24-13 inside the seven-minute mark, Bunch fought gamely and led the Huskers on a belated scoring march, but Nebraska didn’t have enough gas in the tank to score twice, not without a healthy Adrian Martinez at quarterback.

When Frost walked off the field Saturday, head down, a determined look on his face, he may have been trying to channel his inner Winston Churchill. He’ll need it to get his team through the tough times ahead.

Husker fans, who keep making the pilgrimage to Lincoln through one of their worst stretches in recent history, will be called on do keep doing what they’re doing and patiently wait for Frost’s staff to change the way a self-destructive team thinks. It’s hard to watch your family suffer.