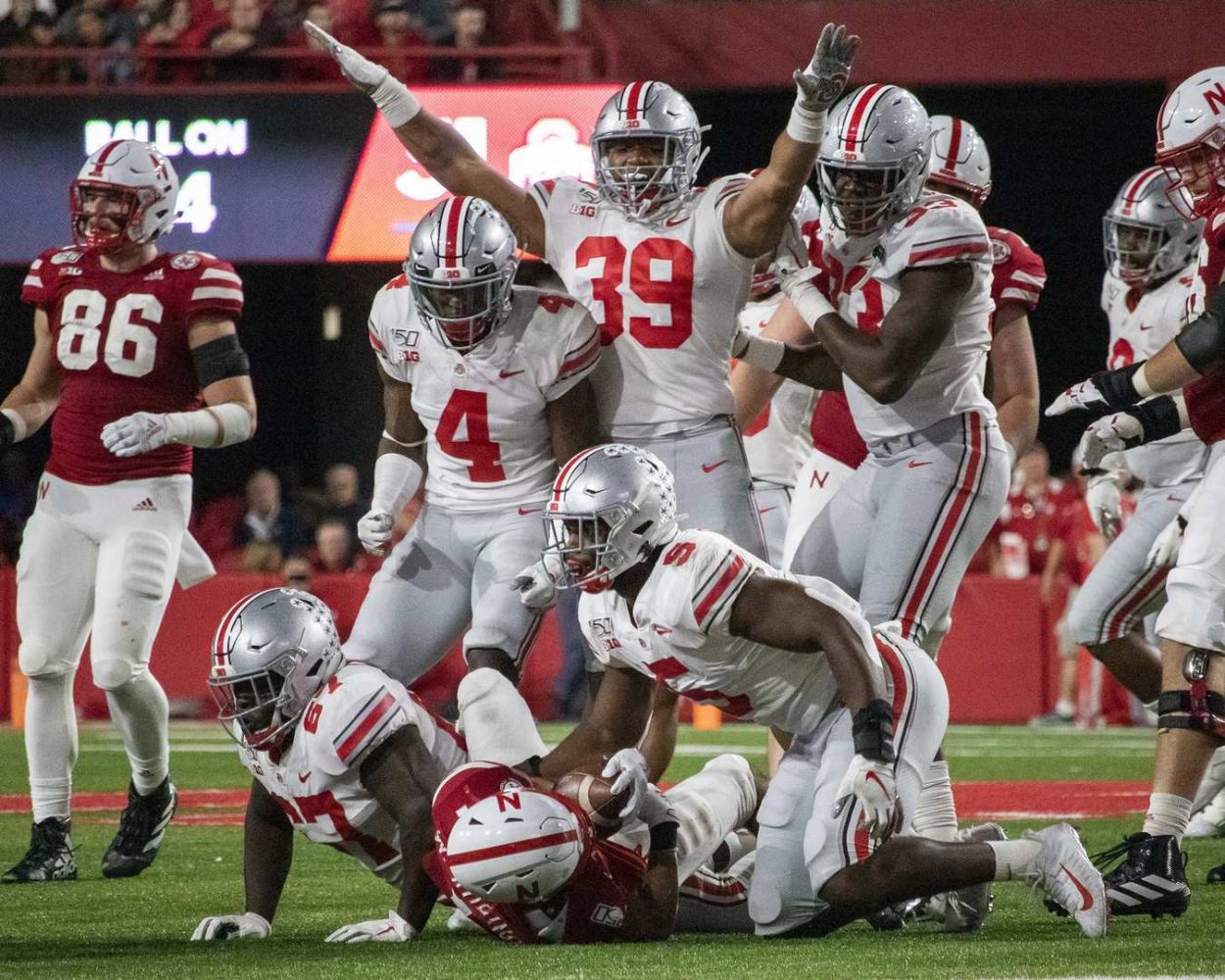 Woody Hayes once made an astute observation about football and adversity.

“There’s nothing that cleanses your soul like getting the hell kicked out of you,” Hayes said.

The Nebraska Cornhuskers today may have the cleanest souls in all of major college football, courtesy of Hayes’ old team, the Ohio State Buckeyes, who hammered the Huskers 48-7 under the bright lights of ABC-TV in a game remarkably similar to the Buckeyes’ last visit to Lincoln two years ago.

In that 56-14 rout, Mike Riley’s Huskers trailed 35-0 at halftime. In this one, Scott Frost’s Huskers trailed 38-0 at intermission and had to hang on by their fingernails to avoid allowing yet another touchdown before going to the locker room. I wondered out loud in the third quarter of both games if the Huskers could avoid their first home shutout since 1968. Yes, but just barely.

It would be tempting to say Nebraska football has made very little progress from two years ago, but that would be wrong. This looks like a playoff-caliber Ohio State team to me. I think they’ll run the table through the Big Ten Championship.

If you’re a Husker fan, you hope this Buckeye team is ready to stand toe-to-toe and slug it out for four quarters against the likes of Alabama and Clemson. I think it could happen this year. If so, it would make another smackdown in front of Chris Fowler and Kirk Herbstreit a little easier to take.

As I walked out of Memorial Stadium Saturday night, I talked awhile with an Ohio State fan who claimed the consensus around the Buckeye program was that Nebraska has improved significantly in all phases of the game, but Ohio State has improved “tenfold” since last season. Take that for what it’s worth, just the opinion of a seemingly knowledgeable Buckeye fan.

Two years ago, Ohio State outyarded Nebraska 633-393. This time, the gulf was even wider, with the Buckeyes claiming a 580-231 edge. Then and now, it’s because Ohio State is far superior at the line of scrimmage. The Buckeye skill players are better than Nebraska’s, although Wan’Dale Robinson could probably hang with anyone on the Buckeye roster, and Adrian Martinez is just a notch behind Justin Fields at quarterback. But the Ohio State offensive and defensive linemen are far better than their counterparts on the Husker roster.

On the Husker Sports Network locker room show, senior nose tackle Darrion Daniels spoke of numerous missed assignments caused by miscommunication. He said Ohio State did the “little things” better than Nebraska time and time again, and he called it the main reason for the margin of defeat. He is right in one sense; Ohio State never missed an opportunity all game long. But the Buckeyes flat-out have far superior talent on both sides of the ball.

Martinez looked utterly ineffective, completing just 7 of 18 passes for 47 yards and three interceptions in a game that likely will prove to be the worst of his career. He had poor pass protection — he was sacked four times — but he flat-out missed open receivers on several occasions when he had ample time to throw. The most noteworthy was when he badly overthrew Mike Williams near midfield for his third interception.

The one thing Nebraska did best on offense was run the ball out of the old-school I formation with Martinez under center. Trailing 14-0 late in the first quarter, Scott Frost went with that look and I thought it was effective. Dedrick Mills got some hard-earned yards between the tackles as the Huskers moved 49 yards on eight plays in their only effective drive in the first half. On first down at the Ohio State 26, Martinez had Wan’Dale Robinson open for a touchdown, but OSU’s honorable mention all-conference defensive end Jonathon Cooper, back from an injury and playing in his first game of the season, shoved Matt Farniok back into his face. Martinez overthrew Robinson, who got his fingertips on the ball just enough to flutter it directly into the hands of Buckeye cornerback Jeff Okudah, who made his second interception of the game while lying flat on his back at the 4-yard line.

I don’t think the Huskers win the game if they score on that drive, but it would have been 14-7 and the complexion of the contest would have changed.

Then again, when you allow 368 yards rushing, you’re really not going to stay too close unless Martinez throws five or six touchdown passes. This was not one of Erik Chinander’s better games. His front seven got pushed around all night long and his defensive backfield allowed 10 yards per pass attempt. The Blackshirts never really came close to disrupting the Buckeyes.

I went into this one thinking the national college football media’s general consensus (“the Husker defense is not up to this task”) was misleading, that the improved talent and depth on the Husker defensive line would cause problems for J.K. Dobbins and keep the game close. Turns out the national media were right and I was wrong. Dobbins rushed for 177 yards on 24 carries. His backup, Master Teague III, added 77 yards and two touchdowns on 12 carries.

To make things worse, Martinez never looked ready for his big opportunity — not even remotely ready. Five times in the first half, Nebraska went three-and-out or worse. The first half was even less compelling than a Nebraska-Kansas State mismatch from the 1980s. ESPN executives were probably scrambling at halftime to think of ways to keep viewers tuned in.

“We’re going to get more opportunities with games like that,” Frost said. ”We’re building this thing. The kids know where this is going, the coaches know where this is going. I give a ton of credit to them and their coaching staff because they’re a lot better football team than they were a year ago. Both teams are two of the blue blood great programs in the history of college football, but those guys have been on top lately, and that’s where we’re trying to get and where we’re going to get. We’re just not there right now, and we have a lot of work to do to make sure that happens.”

Will an old-fashioned, honest-to-goodness soul-cleansing loss do Nebraska some good against Northwestern next week? The mental toughness of this Husker team is up for inspection. The Wildcats have a defense that can frustrate any talented team — just ask Wisconsin’s Jonathan Taylor, who struggled against Northwestern Saturday, although he ended up with 119 yards rushing. The Huskers will have a four-quarter slugfest on their hands. It’s a game that Frost and the Huskers desperately need to win to make real progress this season.