Stryker: Gebbia votes with his feet, hits the road 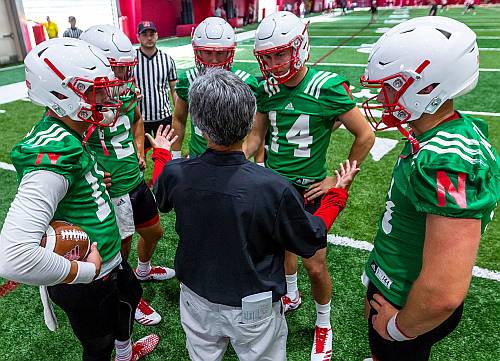 Courtesy of Nebraska Athletics
Martinez (2). Gebbia (14) and the other QBs with coach Mario Verduzco.
By Tad Stryker on 8/27/2018

Mario Verduzco provided vital input. Troy Walters gave his opinion. In the end, though, the only vote that counted belonged to Scott Frost, and he cast his ballot over the weekend.

In the campaign that grabbed the attention of Nebraska fans all summer long — the battle for No. 1 quarterback — the margin apparently was narrow, but decisive. Adrian Martinez will be the first true freshman quarterback ever to start a season opener for the University of Nebraska.

But surprisingly, the biggest vote of confidence for Martinez was cast by runner-up Tristan Gebbia. Gebbia voted with his feet. It’s pretty obvious he believes he cannot beat out Martinez. Not now, anyway. So Gebbia left town as soon as he could make the arrangements. That’s disappointing, but not surprising, I suppose. Not in this era of college football, when players come to college much better prepared physically and developmentally, with much higher expectations than used to be the case.

Yes, one untimely injury to the new freshman quarterback could make Frost’s first season problematic at best. Here’s to good health for Martinez and a big helping of readiness for Andrew Bunch. Still, it’s evident that things have changed for the good in Lincoln.

Just one year ago, the Nebraska quarterback corps was led by Tanner Lee, who many Husker fans still thought was destined for a fine junior season, then hopefully a rendezvous with the first round of the NFL Draft, leaving Patrick O’Brien and Gebbia to battle it out in 2018. But Lee struggled through a disappointing junior season. He declared for the NFL Draft, all right, but waited until Jacksonville took him in the sixth round. O’Brien transferred to Colorado State in May. Now, only Bunch is left from the Riley-Langsdorf quarterback room. But enough looking back.

I have to admit, I thought Gebbia would start against Akron, but at some point, Martinez would overtake him and finish the year atop the depth chart, whether due to injury or better performance. But the mature young man from Fresno, California, who missed his senior year of high school football with a torn labrum in his throwing shoulder, came back and earned the job right from the jump. He deserves it. And if he was going into the 2018 season with a long leash, it’s even longer now.

Despite Gebbia’s extra year of college life, he didn’t have a single snap of advantage over Martinez. Perhaps playing for Mike Riley and Danny Langsdorf actually hindered Gebbia in this battle. Sure, he would have played a dozen or so snaps against Akron, and probably about that many against Colorado. But barring injury to Martinez, I think his playing time would have dwindled in October and November.

Of course, it’s the “barring injury” part that has us all concerned right now.

As for Gebbia, it’s regrettable he made such a big deal about Nebraska being his home, and talking up his unity with his teammates. That makes the parting even more awkward. I wish him well, as do nearly all Husker fans. I suspect we’ll know in a week or so where he lands. I think it will be either with a Mountain West school (where he could face off against O’Brien some not-too-distant Saturday) or possibly the Pac-12.

Gebbia vs Martinez in the Rose Bowl … that would be something, wouldn’t it?

This is part of the territory when you go after highly rated quarterbacks. This won’t be the last time it happens to the Huskers.

Consider that, if all goes as planned for Frost and the coaching staff, in August 2020 they will have Martinez (junior), Noah Vedral (junior), Bunch (senior), Luke McCaffrey (either a sophomore or redshirt freshman), Matt Masker (junior or redshirt sophomore) and Logan Smothers (true freshman) in camp. That’s six underclassmen in the quarterback room, with at least four of them on scholarship. I don’t foresee all of those signal callers finishing their college careers in Lincoln.

Yeah, this transfer scenario could repeat itself. But enough looking ahead.

The Husker offensive line will be good enough this fall to keep Martinez upright, and probably good enough to worry a lot of defensive coordinators. If the Huskers average 200 yards rushing per game, I like their chances to go 8-4 during the regular season, even with the loss of depth at quarterback. That would bring a landslide vote of confidence from all over the nation.