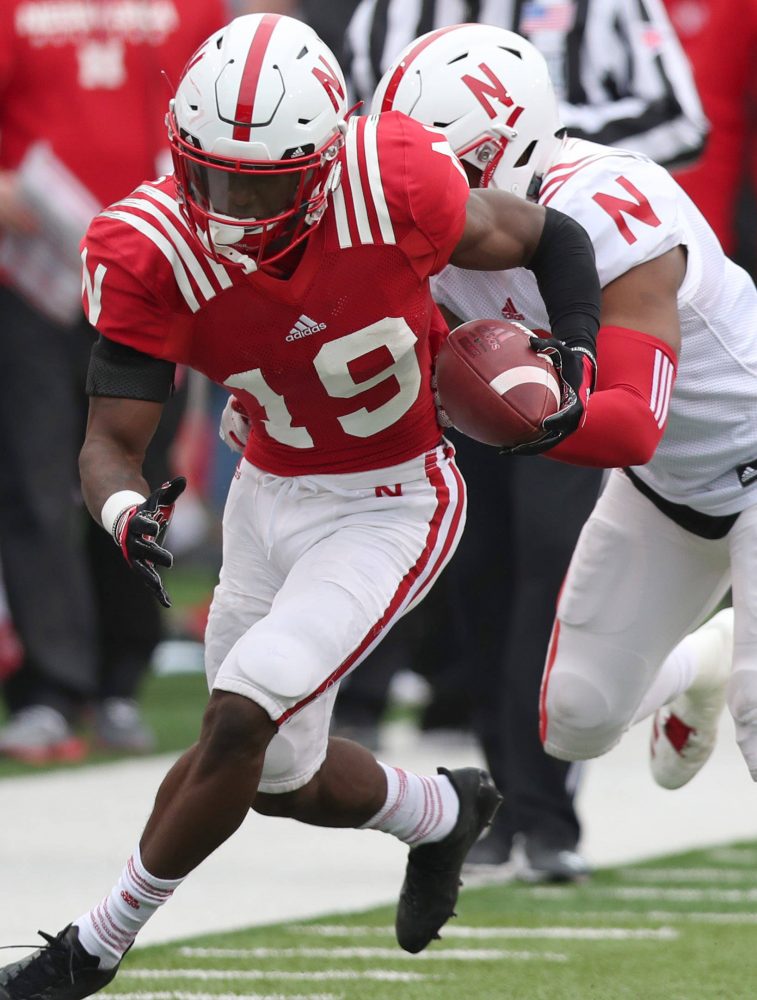 Nebraska Athletics
Mike Williams with a reception.
By Tad Stryker on 4/21/2018

Scott Frost’s homecoming checked most, if not all, the boxes that Nebraska fans hoped it would.

New offense on display. Energy and enthusiasm galore. No serious injuries. A bunch of 2019 recruits in the house. And Frost, the man himself, on the sidelines.

Well, not exactly on the sidelines. Frost spent most of his day in the middle of the field, standing well behind the offense, observing the action while his assistants called the shots during the scrimmage. He seemed to be in tourist mode at times, and admitted as much after the game.

“That was kind of special for me, walking out of the tunnel and hearing the fans,” Frost said. “That brought back more memories than a lot of other things have, especially the smell of the stadium with the food in there just took me back a long time. I was kind of enjoying the day a little bit as a fan, I don’t really get to just watch football very often. I was coaching some, but also just kind of taking it in and enjoying the experience.”

It was a feel-good day for fans as well, maybe even a healing day for hardcore Huskers who had their love for their team tested to the limit last fall. With the Huskers spiraling to a 4-8 season, Memorial Stadium was not a fun place to be in 2017, especially during the second half of the Ohio State and Iowa games, when thousands of fans left early to escape the nightmare as Mike Riley and his players looked befuddled and disinterested.

Nobody walked out of the old ballyard prematurely while watching the Red team beat the White team 49-9. In fact, players and fans lingered on the field and in the stands long after the scrimmage ended, behaving like a recently reconciled family just moving into a new house with better memories on the horizon.

When Nebraska players leave the field, win or lose, hundreds of fans (mostly youth and children) line the red carpeted “Tunnel Walk” area beneath the North Stadium after games. This time, there were more adults high-fiving Husker players and coaches than usual, and they kept hanging out for a full 30 minutes as the players slowly walked by.

The postgame tranquility was in stark contrast to the rapid-fire pace of action on the field. Frost’s offense played fast, just as advertised, usually snapping the ball with more than 20 seconds left on the play clock. The Red team ran 48 plays in the first half and 80 for the game, quite a few considering the second half was played with a running clock. The run/pass ratio was tilted toward the ground game, as the Reds ran the ball 62.5 percent of the time; the Whites, playing from behind, ran the ball on only 52.5 percent of its snaps.

“I don’t think we’re quite urgent enough yet,” Frost said. “So, I don’t know exactly how much time I want on the clock when we snap it, but I just know I want it to be fast.”

All four quarterbacks handled the pace well, and all four looked good overall. It’s hard to get an accurate reading when the green jerseys are on, but true freshman Adrian Martinez and walk-on Andrew Bunch stood out the most. Martinez led four scoring drives and Tristan Gebbia three for the Reds, who had a distinct advantage with a nearly-intact No. 1 offensive line (center Michael Decker missed the entire spring recovering from knee surgery). Bunch led both scoring drives for the White team, which used the second-string o-line. Gebbia looked adequate as a runner and Bunch adequate as a passer, throwing a highlight-reel back-shoulder touchdown pass to tight end Kurt Rafdal in the first quarter. Ironically, Noah Vedral, the only one of the four with major college experience, threw an interception. The Huskers really don’t need a graduate transfer to come in and save the day at quarterback; they appear to have decent depth at the position.

Husker fan convalescence continued with a halftime appearance by the national champion NU volleyball team. An impressive lineup of former Huskers in the NFL returned to Lincoln for the game, among them Ameer Abdullah, who worked as a commentator for the Big Ten Network along with fellow Nebraska graduates Kevin Kugler (play-by-play) and Damon Benning (sideline).

The attendance (defined in the press box as the “number of tickets sold and distributed”) was announced at 86,818, a Nebraska spring game record. The actual attendance might have barely reached 80,000. There were numerous small gaps in the crowd and some large ones. But it was the largest turnout at any college scrimmage this spring.

Frost, who left the field to a warm, cascading ovation, made a point to call it “the first few steps of a long journey for us.” He used that phrase in a sideline interview with Benning as the scrimmage neared its end, and said something very similar in his postgame press conference. He’s doing his best to manage Husker fans’ expectations for this fall, as he should. He noted that his UCF team which went from 0-12 to 13-0 in two seasons, didn’t really “click” as a team until fall camp of year 2. “I hope it happens quicker here,” he said.

It’s morning in Husker Nation, but early enough that we’re still groping around in the predawn mist. The heat of the day will come soon enough, and Frost’s first Nebraska team will get a clear look at a rugged Big Ten schedule. It may take awhile for everything to click; they may not check every box, but the players will be dialed in and play with passion.