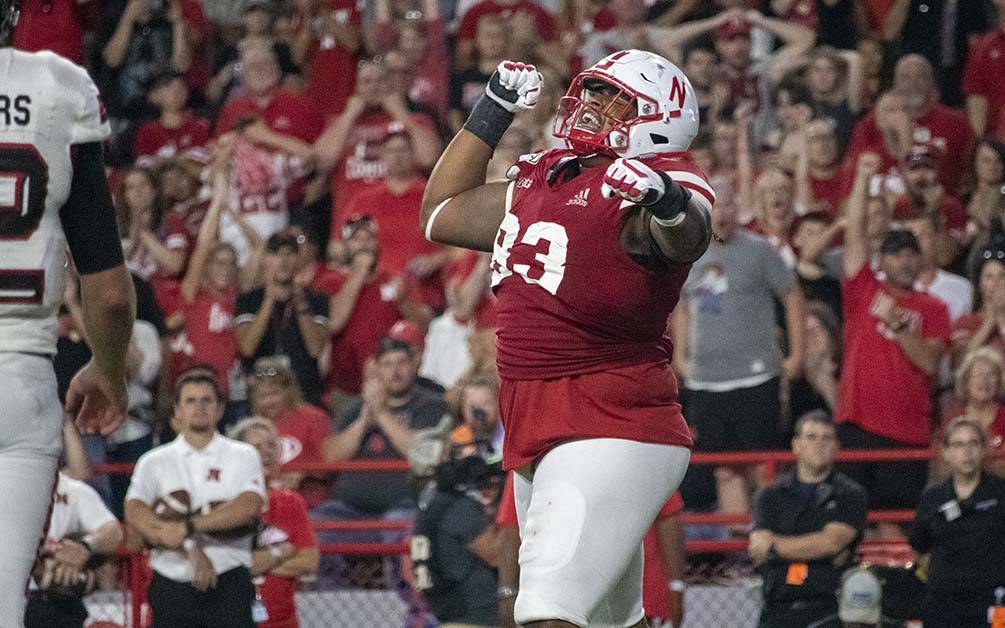 It may be a bit much to call it the “Big D Family Reunion,” but the Davis brothers and the Daniels brothers stood shoulder to shoulder to accomplish a rarity for a Husker defense these days — keeping the opponent out of the end zone all game long.

Nebraska found a bit more more offense during the first-ever night game coached in Lincoln by Scott Frost, but the Blackshirts were front and center during the Cornhuskers’ 44-8 win.

Erik Chinander’s unit has done it twice now (9-6 against Michigan State last season), and the most satisfying moment came early in the fourth quarter, when Northern Illinois made its only its second red zone visit of the game, setting up with a first-and-goal at the 8. On first down, wide receiver Spencer Tears took a reverse six yards to the 2, as safety Marquel Dismuke wrestled him out of bounds.

At that point, Chinander sent in his goal line unit, rushing sophomore Damion Daniels onto the field to join his brother, Darrion in the middle of the d-line. Damion had been on the field for 21 snaps to that point, never more than five plays in a row. Chinander says Damion “burns gas fast,” and one of Zach Duval’s offseason priorities will be to help him improve his stamina by late summer 2020, when he will be the main man at nose tackle. But on this night, Damion had just enough left in the tank.

NIU saw that both Daniels brothers lined up with Carlos and Khalil Davis, and decided to go right at them. It didn’t work; Damion and linebacker Will Honas were ready.

On the next two plays, the Huskies sent running back Tre Harbison up the middle. He gained a scant yard on second down, then was held inches short of the goal line on third. On fourth down, reserve safety Eli Sullivan made a spectacular diving deflection in the flat to deny NIU the end zone a final time.

The Huskers’ depth in the d-line gives linebackers Mohamed Barry and Honas room to roam. Barry led all tacklers with 10, and Honas had eight. Collin Miller spent plenty of time in the Huskies’ backfield as well.

The Blackshirtrs continued to be tough against the run, allowing just 74 yards rushing on 32 carries (2.3 yards per attempt). The Huskers had their third consecutive double-digit tackles-for-loss game (10).

Lamar Jackson looked sharp with four pass breakups, including one in the end zone, as the Huskers looked effective much of the time using press coverage all over the field. They gave up 172 passing yards in the second half, when NIU threw the ball often, but they had five three-and-outs in the first half and kept the game under control.

When the season started, most observers were concerned about the Blackshirts. The Husker skeptics didn’t trust the Husker defense; they said, “show me first.” But through the non-conference schedule, the Nebraska defense has been the most dependable part of the team. It has two bad quarters out of 12.

“The goal line stand is just kind of a symbol of tonight,” Frost said. “When we really needed those guys, they stepped up.”

Freshman Braxton Clark made a solid debut at cornerback, seeing second-half playing time with the first unit and getting an interception. But the departure of Cam Taylor-Britt with an apparent shoulder injury is worrisome at best.

Meanwhile, the Husker offense was spectacularly sporadic, which was not a big surprise against the gambling-style defense used by Northern Illinois. Adrian Martinez seemed to more relaxed, and was generally effective, completing 16 of 27 passes for 257 yards with two touchdowns with no interceptions. He ran 11 times for 44 yards and another touchdown.

The Huskers still struggle to get the ball into the hands of Wan’Dale Robinson (five touches) and J.D. Spielman (six touches, including two punt returns), although Kanwai Noa made his first receptions of the season, grabbing three for 51 yards, including a 27-yard touchdown with five seconds left in the first half, and Mike Williams caught one for 24 yards. The tight ends had only two receptions (Jack Stoll had both).

The running game was better, if still not dependable, and it was a night for explosive plays. The Huskers had nine plays of 20 yards or more, including eight in the first half, and Dedrick Mills became the first player to rush for 100 yards against the Huskies in their last 18 games. Nebraska rushed for 247 yards, but almost half of that total came on two plays (Maurice Washington’s 60-yard touchdown run early in the second quarter and Mills’ 61-yard spring in the first quarter). Northern Illinois had seven tackles for loss and stuffed a lot of runs for 0 or 1 yards. Mills adid a better job of looking for holes, and found a few between the tackles to burst through.

You want to see the ball spread around even more? The Huskers need more snaps from scrimmage. They had just 65 (the Huskies had 81).

NU improved a bit on third down, converting 6 of 13. But more third-down conversions will mean more snaps and more opportunities to spread the ball around. It may not get any easier without starting left tackle Brenden Jaimes, who left the game in the fourth quarter with an apparent left knee or ankle injury. If he’s out for the season (and that’s mere speculation at this point because Frost and Martinez seemed upbeat about his chances to return), Jaimes could use this as a redshirt season since he played as a true freshman.

Possibly the most encouraging indicator of the night was that NU had only one penalty, an unsportsmanlike conduct call on freshman Noa Pola-Gates after a touchback. I think you’d have to go back to the Osborne era to find the last game without a penalty by the offense or defense. I’m betting on the 1995 Colorado game in Boulder.

Who wants to placekick for the Huskers? It was Lane McCallum’s turn Saturday night after Isaac Armstrong made a 36-yard field goal in the first quarter, then had three kicks blocked (a PAT and two more field goal tries from 37 and 32). Raise your hand if you’ve never heard of McCallum. He’s a sophomore from Norfolk High School, where he once played soccer. He’s listed as a safety on the Husker roster. He once played for the Air Force Academy. He booted three extra points for the Huskers after Frost pulled Armstrong from placekicking duties. Barret Pickering cannot return too soon.

It’s on to the Big Ten schedule for 2-1 Nebraska, which hopes to get Frost’s first road win next Saturday night at Illinois. With a little help from the offense, the Blackshirts are a good bet to deliver it.