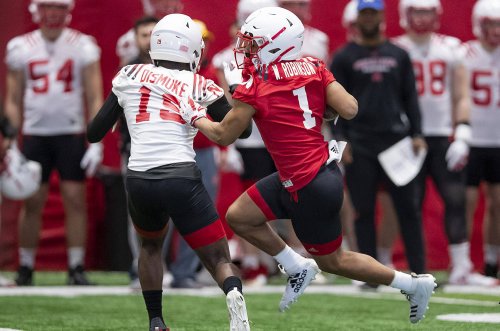 Courtesy of Nebraska Athletics
Highly-touted multipurpose back Wan'Dale Robinson shows his moves in practice.
By Tad Stryker on 6/16/2019

Scott Frost was baptized by fire in Year One. He is getting another baptism — by leisure — as he approaches Year Two.

The events of this June are one reason why hardcore college football fans hate the off-season. Maurice Washington and Wan’Dale Robinson — two highly touted athletes who have the ability to make Frost’s offense explode — instead, made fans’ heads explode when they were cited within a week of each other for marijuana-related incidents while in their college dorm.

It’s an age-old problem. Players used to navigating a tight schedule suddenly have more down time than they’re used to. It’s a true test of their personal discipline and decision-making skills. Some make dumb decisions and get into trouble.

The players look bad. The football team looks bad. The coaching staff looks bad. Is it the end of the world? Certainly not. Is it an unwelcome signal of what might be down the road? It certainly is.

Should Washington and Robinson be suspended for a game? Multiple games? Kicked off the team? That’s not the point of this column. I don’t have a punishment to suggest. I’m pretty sure Frost, playing the role of coach and father figure, will be the main arbiter in these matters. He will look at all the facts and make an informed decision without rushing into it.

What were those two thinking? Were they thinking at all? At best, these are transitory offseason tangles, but the problem goes deeper. Smoking or otherwise using pot is illegal on several fronts — it violates University of Nebraska and NCAA regulations, as well as state law. But judging by what I see and hear, many folks of all ages don’t think that’s a big deal.

I have seen a lot of Fathers Days come and go. How would I look at it if I were a teammate, maybe a junior or senior in the offensive line, who plans to do a lot of blocking for guys like Washington and Robinson and is sick to death of losing Big Ten football games? Well, a lot of kids these days see pot as no more harmful than junk food — so I think that’s how I’d look at it.

I’d see a teammate who has a “me-first” mindset. I’d view Washington and Robinson much the same way I’d view teammates who are more committed to junk food more than they likes to preparing their minds and bodies for battle. Marijuana doesn’t help your time in the 40, and it doesn’t build more lean muscle mass. If Washington and Robinson are using pot to cope with chronic pain issues, they should think seriously about whether they would stand up to the pounding of the NFL.

We 50-somethings are more comfortable with the low-maintenance, Rex Burkhead/Andy Janovich types, but for a team to reach Top 10 status, the borderline prima donnas need to contribute heavily, too. Lesson One is to check egos at the door and learn to play with passionate humility. I think back to my time in college, and I compare this situation to some underage kid who downs a few beers every once in awhile. Illegal? Sure, but everybody’s doing it, right? No, not everbody was doing it back then, and not everyone’s doing it now. And certainly not everyone’s doing it on the Nebraska Cornhusker two-deep roster, with all the associated rights and responsibilities. If you really believe that being a Husker means living up to a proud tradition, that’s a non-negotiable. That’s the point.

I’d figure there’s a reason that beer, marijuana and Raising Cane’s chicken fingers are not on Dave Ellis’s approved list. With the university going out of its way to provide nutrient-rich food and a number of healthy snack options, this is not the mark of players who are serious about competing at the highest level. I’d encourage those two underclassmen to think about that.

If I’m the upperclassman, I’d take Washington and Robinson aside and remind them that if there’s another violation, you’re showing me that you’re not serious about being part of the team. I’m treating you like I’d treat someone who just can’t lay off the Taco Bell and the Hostess Twinkies in his dorm room. I’d treat them like the guy who places a higher priority on junk food than Big Ten glory. Are they bad people? No. Are they my first choice to have on my side when I go to war? Hardly.

If I understand Frost’s first 18 months as Husker coach, he’s trying to build a culture where players take responsibility for a lot of the first-line disciplinary action. He’s hard at work not only recruiting talent, but developing players who will hold their teammates accountable.

That’s not easy to do. Tom Osborne, possibly the best father figure in Nebraska history, got it done, but it took a while and there were still plenty of notable bumps near the end of his career. Frank Solich allowed recruiting to ebb, but did a respectable job of developing leaders. Then Steve Pederson effectively stuck a knife in the Husker leadership tradition with his hiring of Bill Callahan, who had his hands too full shoving square pegs into round holes as he tried to teach Nebraskans how great his West Coast offense was to worry about intangibles like peer leadership. I’d say Bo Pelini made progress on restoring the tradition, but Mike Riley reverted to the Callahan style, hoping to entice top-end talent to Lincoln as a launching pad to the NFL and was too busy trying to be pals with his players to really build leadership. There’s nothing wrong with recruiting NFL-caliber talent, but getting them to play team-first football and feel a sense of brotherhood and obligation to their teammates is a higher level that Callahan and Riley never approached.

Riley and Callahan used a pro-style offense that depended largely upon getting four- and five-star recruits to make it run, especially on offense where their pass-heavy attacks and elementary run schemes were predictable. That’s why I said for years that Riley would succeed as head coach in Lincoln to the extent that he succeeded in returning NU to its former status as “Offensive Line U.” He never came close.

Frost’s floor is much higher than Riley’s if for no other reason than his offense is much more diverse and college-friendly with its emphasis on running QB. Also Frost and staff have already adjusted better to the Big Ten in his first go-round than Riley and his staff did in three years.

What about Frost’s ceiling? He’s already proving to be an excellent recruiter, but he can take it to another level. Frost will succeed as head coach at Nebraska to the extent that he can reinstate a team-first concept, preparing players to be peer leaders as upperclassmen and inspiring walk-ons to consistently play above their talent level.

That team-first concept under Osborne reached its pinnacle in 1997, when Grant Wistrom and Jason Peter decided to return for their senior seasons to help win a national championship. To say they held the whole team accountable is an understatement. Frost has work to do to develop leaders in the same mold. This year, he’ll need to inspire Riley recruits — Mohamed Barry, and apparently Oklahoma State graduate transfer Darrion Daniels, come to mind — to take that role. They’ve got a challenge in front of them.