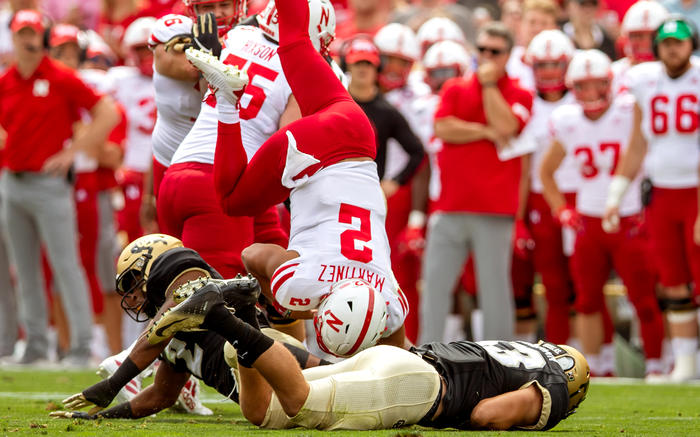 Courtesy of Huskers.com
Adrian Martinez fumbles on a big hit in the first half.
By Tad Stryker on 9/7/2019

Remember a couple of weeks ago, when quite a few people (including me) were optimistic about Nebraska’s chances in the Big Ten West this season based on the logic that the Cornhuskers had the best coach-quarterback combination in the league? Well, we don’t look so smart now.

The Scott Frost-Adrian Martinez connection is off to an unexpected stumbling start in 2019. So are the Huskers, who blew a 17-point lead late in the third quarter and found a way to deliver another gut-wrenching 34-31 overtime loss to Husker Nation Saturday — this time at Folsom Field.

A crisis of confidence permeates Nebraska football right now, and Frost and Martinez are right in the middle of it. A lot of people put a lot of stock in that duo. And most of those people are second-guessing their misplaced confidence right now. If Nebraska football was a Wall Street commodity, its price per share just took a hit.

Frost seemed to sense that when, in his postgame press conference he said, “I promise you guys, this is going to get better.”

He may be right. He may turn this season around. But this team doesn’t play like a West Division contender. It has way too much trouble converting on third-and-short. Nebraska football will improve, but probably very slowly. This team may have enough talent to contend in the West, but still can’t get out of its own way. It could be a four-year project.

This was a game Nebraska should have won by three touchdowns. The Huskers should have answered a lot of questions and shut up a lot of critics. Instead, they raised even more questions — questions about their mental toughness, their resiliency and the state of their strength and conditioning program. The Huskers may have gotten bigger, stronger and faster during the offseason, but on the field, they still don’t pass the eye test. I saw a Colorado team that was much stronger in the second half than Nebraska. Just like last year. Very disappointing.

Truly, Nebraska should have run away with this one. At the start of the third quarter, Colorado appeared ready to accept defeat. But inexplicably, when the Huskers came out of the halftime locker room, they immediately were in disarray. They had to burn a timeout before they took their opening snap. During that timeout, someone must have hit both Frost and Martinez between the eyes with a 2-by-4, because neither man’s body language was right the rest of the game as they presided over the collapse.

Something went very wrong in the minds of Frost, Martinez and the Husker offense. For the entire third quarter, that unit played with almost no passion. The Huskers could not match the energy of a midlevel Pac-12 team, one that ended the 2018 season with a seven-game losing streak.

A single touchdown would have broken the dam. Instead, the opportunity to clinch evaporated after the first three series, including a pair of three-and-outs. The Huskers invited the Buffs back into the game, and the damage was done.

It’s hard to overstate how big an opportunity the Nebraska football program just wasted, how much momentum-killing negativity the Huskers just sprayed all over themselves. This meltdown cost Frost and his team a lot of capital with Husker Nation, and with college football analysts nationwide. You’ll have to look long and hard to find anyone who is optimistic about anything north of a 6-6 regular season now.

Martinez had his moments, throwing two touchdown passes and running for two TDs, but tossed another interception and enhanced his growing reputation as a fumbler by coughing it up thrice, losing two. He stood tall after the game and took the blame, said the right things, but his on-field reputation has taken quite a hit. Let’s just say he’s no longer on any Heisman lists. He wasn’t even the best quarterback on the field.

Wan’Dale Robinson, despite a critical dropped pass against CU, shows promise. But no other wide receiver outside of J.D. Spielman has shown anything through the first two games. The loss of Stanley Morgan looms large. At running back, Dedrick Mills seems prone to leaving piles of yardage on the field by lowering his head and crashing into defenders instead of making a cut into open territory. Did he have better field vision as a freshman for Georgia Tech? An even bigger question: why does Martinez have worse field vision than he did last year as a freshman?

The offensive line is no longer pillow soft; it’s just erratic and prone to mental lapses. So I guess there’s some improvement there from two years ago. But don’t call Zach Duval the best in the business, because I don’t see the evidence. Not yet. Maybe I’ll be convinced next year.

Husker Nation, you weren’t really all that excited about ESPN Gameday returning to Lincoln anyway, right? I guess we’ll have to settle for seeing Jack Stoll get rid of his mullet.

I wonder how many of the 20,000-plus Nebraska fans who somehow made their way into Folsom Field paid more than $250 per ticket? Heck, most of them probably shelled out hundreds more in season ticket fees to boot. I wonder how many of them will make any more road trips this season? Nebraska football fans have given and given and given some more over the last decade, with precious little return.

Speaking of the fan migration to Boulder, never let it be said Nebraska is uncharitable to Colorado. The generosity of those 20,000 red-clad fans made it the highest-revenue game in Colorado football history. They may have pumped more money into the Colorado economy than a year’s worth of cannabis taxes. Then the Huskers gave coach Mel Tucker a nice little career boost with their disappearing offense act in the third quarter.

In fact, Nebraska football has provided four years’ worth of fuel for CU bragging. Nobody has done as much for Colorado football this decade as Frost and his team.