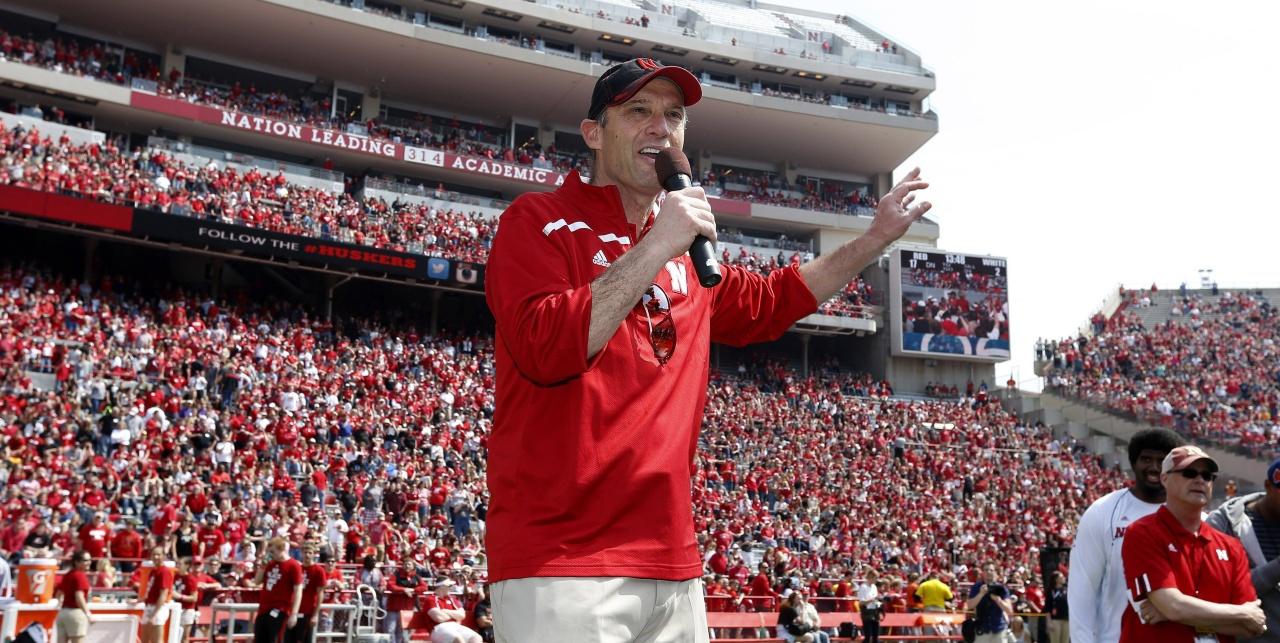 It’s difficult to draw many solid conclusions from a spring football game, but here’s one. After weeks of hearing about A.J. Bush closing the gap on Armstrong in their race for the starting quarterback spot, Armstrong still has a clear lead, although neither looked smooth passing the ball. Both completed about 50 percent of their tosses on a windy day at Memorial Stadium.

Zack Darlington looked better than Bush, completing seven of 11 passes for 70 yards and one touchdown. It was good to see Darlington running around out there after recovering from a serious concussion in his senior year of high school. And it’s hard to overlook the two interceptions Bush threw.

I wonder how much read option we’ll see this fall. Quite a bit, I suspect. The Huskers worked out of the shotgun at least three-fourths of the time Saturday. Most of the under-the-center offense will wait until this fall. In year one of the transition to Riley’s offense, the big questions will be how much change, and how soon? But we’ll take it a little at a time. On Riley’s first appearance in front of a big home crowd, there was very little change in the look and feel of Nebraska’s attack, which was not surprising.

In fact, possibly the most impressive thing about Riley’s first Red-White spring game in Lincoln was that it looked a lot like previous Red-White games. Not bad, considering that the players were essentially learning a new language on offense and defense. The day was almost devoid of confusion as players lined up crisply, even with mass substitutions late in the scrimmage. And the majority of the 76,881 fans stayed until late in the fourth quarter, drinking it in.

It was a fairly clean game, with relatively few penalties. There was some decent offensive line play, but a lot of inconsistency. I thought I saw the beginnings of cohesive linebacker play. There were a few big plays, including a nice punt return by De’Mornay Pierson-El. Senior receiver Jamal Turner, fighting back from a torn Achilles’ tendon, caught a 29-yard TD pass from Darlington.

I was impressed that Riley’s staff was organized enough to put respectable special teams play on the field in their first spring game. The entire first half was played with standard kickoffs, punts and placekicks. Sam Foltz is gaining momentum as a punter. He looked excellent, placing several inside the 20-yard line, and made a touchdown-saving tackle on Pierson-El while wearing a GoPro helmet cam. Foltz packed a game’s worth of highlights into the first half, then missed second half with illness.

As expected, nobody took control in the race at running back. Nobody got as many as 10 carries.

Terrell Newby started for the Red team, and showed flashes of open-field running ability. He rushed for 42 yards on the opening series, with the offense running out of shotgun sets and a single back like last season. Redshirt freshman Adam Taylor looked more like the total package than anyone else. He scored on an 8-yard run to finish the game’s opening drive, but early in the third quarter, he muffed a slightly overthrown screen pass from Johnny Stanton, which turned into an interception.

Newby got the majority of Riley’s compliments postgame for his pass catching ability and his pass blocking, and it wouldn’t be surprising to see him start against Brigham Young.

The defense, as expected, is ahead of the offense, even without Nate Gerry, who was a late scratch with a tweaked knee. He “should be full speed by mid June,” Riley said in his postgame press conference. Michael Rose looks very much at home at linebacker, and so did Josh Banderas, wearing the No. 25 jersey normally worn by his buddy Gerry. It would be nice to see them work well together all season.

The defense could be solid enough to keep Nebraska in every game this fall. But to make it a nine- or 10-win season, Armstrong is going to have to grasp the new passing concepts being fed to him by Riley and offensive coordinator Danny Langsdorf, and he’s going to have to learn to be automatic on screen passes. Riley seemed satisfied with what he saw from Armstrong on this day.

“The hard part for a guy who’s been playing a couple of years is having all of a sudden a whole new system put in – language and everything,” Riley said. “He did a good job learning it. There’s some new football he’s dealing with. The thing that never wavered about Tommy, and that’s a separator for him right now as I see it, is his confidence. He’s a confident guy. If something doesn’t go exactly right; he doesn’t blink; he just goes back out there and plays. I like that about him.”

On the surface, the Husker offense appeared a lot like it did last fall. But Riley knows what lies beneath the surface, and he alluded to the changes Armstrong is facing.

“It’s a tough thing midway through your college career to have your foundation of what you know pulled out from under you,” Riley said. “That’s a tough deal for him, but I think he’s done well, and should continue to grow with it.”

Formerly the sports editor at the North Platte Bulletin and a sportswriter/columnist for the North Platte Telegraph, Tad Stryker is a longtime Nebraska sports writer, having covered University of Nebraska and high school sports for more than 30 years. He started writing for this website in 2008. You can e-mail him at [email protected]