Stryker: Amid team’s erratic behavior, Frost hasn’t made his peace with losing 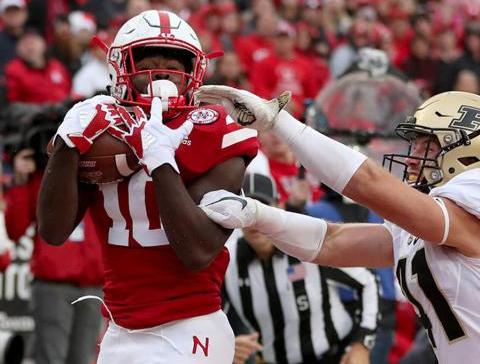 Nebraska Athletics
JD Spielman scores in the third quarter.
By Tad Stryker on 9/30/2018

Warriors and wild men look similar much of the time, but when a pressure situation hits, they respond differently. Scott Frost got an unpredictable mix of both when he came to Lincoln, and so far the results have been interesting — flashes of brilliance mixed with totally irrational behavior — but ultimately frustrating.

It’s an entirely different thing watching Scott Frost handle a postgame press conference after his fourth consecutive loss than it was with his predecessor. Kind of like the difference between watching a permissive, golly-gee-whiz dad get run over by his kids, as opposed to watching a very determined, fully engaged dad make a plan to counter the unacceptable behavior. Either way, there’s going to be pain. But with Frost, I think much of the pain will be contained to this season.

Frost inherited some talent when he came to Nebraska. He inherited some young men who play with passion and fire. He also ended up with some who don’t seem to put a high priority on self-discipline and focus. In big-boy football, that will eliminate you from contention almost every time.

The Huskers’ 42-28 defeat at the hands of a 2-3 Purdue team Saturday in Memorial Stadium was a school-record eighth consecutive loss, which is jointly owned by Riley and Frost, although it’s pretty easy to tell which one of them is bearing most of the pain. Riley made his peace with losing long ago, whereas Frost takes it hard.

When Frost came to the podium after the game, there were three or four seconds of silence. Then a reporter launched into a long, winding series of statements that eventually led into a question. At that point, Frost pretty much ignored him and unleashed some of the pain and frustration churning in his gut.

“In three of our games, we’ve played well enough to win a game,” Frost said. “In my opinion, we honestly look like one of the most undisciplined teams in the country, and it kills me because it isn’t like we aren’t trying to give them messages, it isn’t like we aren’t trying to hold them accountable. That being said, we’ve got a bunch of guys that are warriors that didn’t stop fighting.

“It’s up to us as coaches, but it’s also up to that team to stop allowing the other stuff to happen. We can’t get holding calls on interceptions and then talk trash to their sideline and start dancing on the field. I didn’t know what was going on, when we’re down 13 points and we’ve got backups and reserves dancing on our sideline before kickoff. They look like they love losing, and they look like they’re undisciplined. We got another penalty on special teams and instead of starting at the 30, we started on our own 8. We get penalties on third-and-20 and we get penalties when are drives are going and we kill them. I’m tired of looking at it. There’s really no difference from a coaching perspective from ‘I can’t do it’ and ‘I won’t do it’. The people that won’t make good decisions, the people that are hitting people that are three yards out of bounds, if that keeps up I’m just going to ride with the guys that are doing it the right way. We’ve got a lot of warriors on this team and a lot of guys that played well enough to win, but I’m tired of coaching an undisciplined team.”

The coach with the new-school offense is old-school at the core, and that combination eventually will make the Cornhuskers hard to deal with in the Big Ten. But for now, there is a lot of painful training and probably a case or two of big-time conflict dead ahead. New faces in the depth chart? Players leaving the team? I wouldn’t be surprised at either. But one thing’s for sure: Frost won’t let things fester for long.

Confrontation is painful, but only in the short term. It’s a different feeling than last year, when the final four games rapidly snowballed on Riley, and multiple Nebraska players stopped playing hard. That’s not happening so far in the first four games of the Frost era, nor do I expect it to. I wouldn’t be surprised if Frost replaces a couple of his more talented players with up-and-comers who are more teachable and less combustible under pressure. Of course, in exchange, we’ll see multiple errors of inexperience. I’d rather have that than false bravado and posturing any day.

You might say Frost is the father of a wildly undisciplined adolescent who shows flashes of greatness. That can be an exhilarating place to be. It’s also a maddeningly frustrating place to be. You’re going to see some flecks of gray in the Frost beard by next year’s Big Ten Media Days.

Frost’s offense looked dynamic on the opening possession, as the Huskers finally took an early 7-0 lead after Devine Ozigbo finished a 10-play, 75-yard drive with an 18-yard touchdown run. Then very little went right until the middle of the third quarter, as Purdue ran off 27 unanswered points. You recognize the symptoms: the Husker defense forced Purdue into several third-and-long situations, then gave up the first down on blown assignments or penalties, generally either extending Boilermaker scoring drives or putting the Huskers in poor field position.

We saw flashes of excellence mixed with totally irrational behavior Saturday as Nebraska finally scored first, then did practically nothing else for the rest of the first half. The second quarter was a disaster, Purdue outgained Nebraska 208 total yards to 139, and the Huskers committed four penalties for 46 devastating yards. One penalty nullified a Nebraska interception. Another wiped out a 30-yard punt return by JD Spielman, who remains as consistent as anyone on this team, catching seven passes for 111 yards and two touchdowns against the Boilermakers.

Bright spots were there to be found, from Ozigbo’s best career rushing day (17 carries for 170 yards and two touchdowns, including a 35-yard run that accounted for about one-fourth of Nebraska’s second-quarter yardage. The defense is learning lessons about flying to the ball and gang tackling. Sophomore cornerback Dicaprio Bootle is easily Nebraska’s best player in the secondary. Playing press coverage most of the day, Bootle had three pass breakups, seven tackles and one questionable pass interference penalty. And except for one 40-yard pass reception by Purdue freshman receiver Rondale Moore, the Huskers did a decent job of containing the future all-conference talent, allowing him only 85 receiving yards, four rushing yards and six yards on punt returns.

Freshman quarterback Adrian Martinez seemed a bit tentative early in the game, and overall the Huskers looked less comfortable with their new offense for more than 30 minutes than they did in the first half of the season opener. Then Martinez started relaxing, receivers started separating and the Huskers piled up 31 first downs and nearly 600 yards of total offense. Martinez and Purdue quarterback David Blough each completed 25 of 42 passes for more than 300 yards, although Martinez threw one fourth-quarter interception when he tried to do too much under pressure on first down.

Judging by the difficulty of the road schedule that’s about to hit the 0-4 Huskers, this loss probably eliminated them from bowl contention. The rest of this season will be strictly to build a solid foundation for the future. Someone will have to step forward to provide stability on the defensive line. Defensive coordinator Erik Chinander is trying a lot of combinations with mixed results.

For now, this is not a team that’s ready to play 60 minutes of consistent football. Not even close. And that bothers Frost to no end, which is one reason the state of Nebraska loves him.

Having a dad that’s making all the right decisions doesn’t necessarily guarantee the best possible outcome for all his erratic children. But Frost’s situation is different in that the kids he inherited will cycle out of the program within four years and new ones will arrive. Frost appears to view this as a supreme challenge. To oversimplify, he loves his team, but he’s furious at their behavior. This is going to be worth watching. I get the feeling he’s about to make a few key moves.

Frost had more to say in the postgame presser. He had a lot to get off his chest. But when asked why the mistakes keep happening, the coach was somewhat guarded.

“I’ve got a sense of why, but I don’t really want to say why, because this is my team, this isn’t somebody else’s team,” he said. “In order to have a disciplined team, you have to have guys that really care, and guys that are accountable and you have to have an environment where they’re held accountable. It’s all of the little things that they do, on and off the field. We’re doing that, I don’t know if it’s taken root with people. I don’t know how many habits people have. We’re trying to break a lot of habits. We’re trying to teach them how we want things done, because I know when things are done that way, you win championships. As hard as this team has played and a lot of guys on this team have played well enough to win, we’re not going to win as long as those things are happening.”

It’s no coincidence that whenever Frost talks about warriors, you don’t hear much mention of the team’s interior linemen. It’s no secret that’s where Nebraska needs the most improvement. But on this day, the o-line at least showed flashes of promise, especially with Tanner Farmer at center and Boe Wilson at right guard. The defensive line seems to have forgotten how to rush the passer, and frankly the run defense was disappointing. One place where Nebraska shows consistency is its poor third-down performance on both sides of the ball. That, and its utter inability to get takeaways on defense.

When faced with pain, undisciplined people tend to default back to their “medication” of choice, which increases the likelihood of more pain in the future. Frost is trying to break deep-seated destructive football behaviors in many of his players. It will be worth the struggle in the long run, but probably downright aggravating to watch for much of October. Hopefully, the last few weeks of the season will show some payoff.