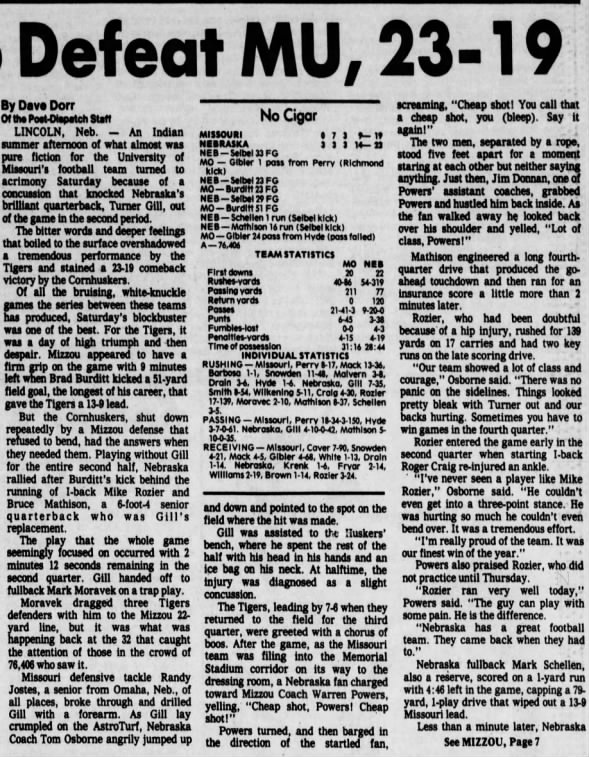 LINCOLN, Neb. – An Indian summer afternoon of what almost was pure fiction for the University of Missouri’s football team turned to acrimony Saturday because of a concussion that knocked Nebraska’s brilliant quarterback. Turner Gill, out of the game in the second period. The bitter words and deeper feelings that boiled to the surface overshadowed a tremendous performance by the Tigers and stained a 23-19 comeback victory by the Cornhuskers. Of all the bruising, white-knuckle games the series between these teams has produced, Saturday’s blockbuster was one of the best. For the Tigers, It was a day of high triumph and then despair. Mizzou appeared to have a firm grip on the game with 9 minutes left when Brad Burditt kicked a 51-yard field goal, the longest of his career, that gave the Tigers a 13-9 lead. But the Cornhuskers, shut down repeatedly by a Mizzou defense that refused to bend, had the answers when they needed them. Playing without Gill for the entire second half, Nebraska rallied after Burditt’s kick behind the running of I-back Mike Rozier and Bruce Mathison, a 6-foot-4 senior quarterback who was Gill’s replacement. The play that the whole game seemingly focused on occurred with 2 minutes 12 seconds remaining In the second quarter. Gill handed off to fullback Mark Moravek on a trap play. Moravek dragged three Tigers defenders with him to the Mizzou 22-yard line, but It was what was happening back at the 32 that caught the attention of those in the crowd of 76,406 who saw it. Missouri defensive tackle Randy Jostes, a senior from Omaha, Neb., of all places, broke through and drilled Gill with a forearm. As Gill lay crumpled on the AstroTurf, Nebraska Coach Tom Osborne angrily Jumped up and down and pointed to the spot on the field where the hit was made. Gill was assisted to the Huskers’ bench, where he spent the rest of the half with his head in his hands and an Ice bag on his neck. At halftime, the injury was diagnosed as a slight concussion. The Tigers, leading by 7-6 when they returned to the field for the third quarter, were greeted with a chorus of boos. After the game, as the Missouri team was filing Into the Memorial Stadium corridor on its way to the dressing room, a Nebraska fan charged toward Mizzou Coach Warren Powers, yelling, “Cheap shot, Powers! Cheap shot!” Powers turned, and then barged in the direction of the startled fan, screaming, “Cheap shot! You call that a cheap shot, you (bleep). Say It gain!” . ; The two men, separated by a rope, stood five feet apart for a moment staring at each other but neither saying anything. Just then, Jim Donnan, one of Powers’ assistant coaches, grabbed Powers and hustled him back inside. As the fan walked away he looked back over his shoulder and yelled, “Lot of class, Powers!” Mathison engineered a long fourth-quarter drive that produced the go-ahead touchdown and then ran for an Insurance score a little more than 2 minutes later. Rozier, who had been doubtful because of a hip injury, rushed for 139 yards on 17 carries and had two key runs on the late scoring drive. “Our team showed a lot of class and courage,” Osborne said. “There was no panic on the sidelines. Things looked E retry bleak with Turner out and our acks hurting. Sometimes you have to win games in the fourth quarter.” : Rozier entered the game early In the second quarter when starting I-back Roger Craig re-injured an ankle. “I’ve never seen a player like Mike Rozier,” Osborne said. “He couldn’t even get into a three-point stance. He was hurting so much he couldn’t even bend over. It was a tremendous effort. “I’m really proud of the team. It was our finest win of the year.” Powers also praised Rozier, who did not practice until Thursday. “Rozier ran very well today,” Powers said. “The guy can play with some pain. He Is the difference. “Nebraska has a great football team. They came back when they had to.” Nebraska fullback Mark Schellen, also a reserve, scored on a 1-yard run with 4:46 left In the game, capping a 79-yard, 1-play drive that wiped out a 13-9 Missouri lead. Less than a minute later, Nebraska linebacker Brent Evans intercepted a Missouri pass, and three plays after that Matbison darted 14 yards for a touchdown with 2:10 remaining. ; The victory improved Nebraska’s record to 6-1 on the season and 3-0 in the Big Eight. Missouri, which held the Cornhuskers’ potent offense in check for most of the game, fell to 3-2-2 and 0-1-2. i Missouri’s Mike Hyde, replacing starter Brad Perry late in the game, threw a 24-yard touchdown pass to tight end Andy Gibler with less than a minute to play, accounting for the final margin; Gibler finished with four receptions for 68 yards and became Mizzou’s leading career receiver in receptions, surpassing Joe Stewart. Missouri took a 13-9 lead on Burditt’s field goal with 9:07 left in the game. The kick came nine plays after Nebraska’s Dave Burke intercepted a pass but fumbled the ball back to the Tigers at the NU 46-yard-line. On Nebraska’s winning touchdown drive, Mathison completed three of three passes and Rozier contributed runs of 17 and 27 yards.