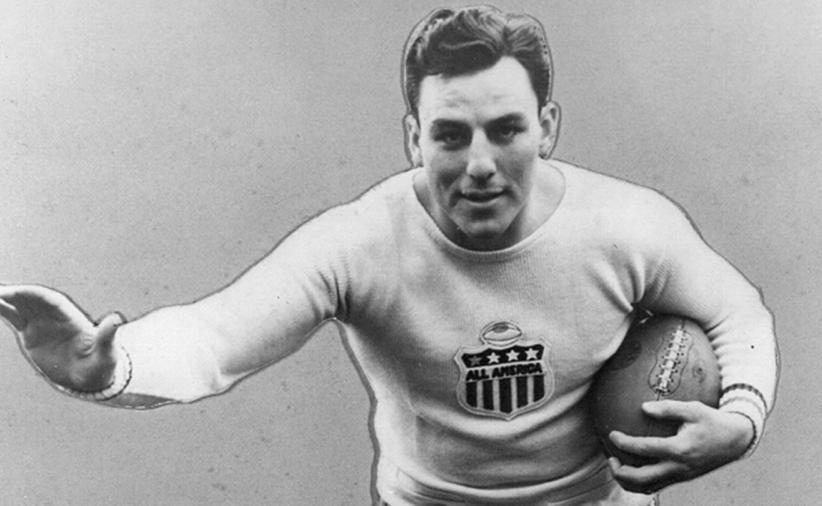 Sam Francis, a two-sport star for the Huskers in the 1930s, was announced as the fifth member of the 2020 University of Nebraska Athletic Hall of Fame class on Tuesday, April 14. Francis is being inducted posthumously, as he passed away on April 23, 2002, at the age of 88.

Francis was a decorated member of Nebraska’s football and track and field teams from 1934 to 1937. As a fullback on the gridiron, Francis was the 1936 Heisman Trophy runner-up, a consensus first-team All-American and the No. 1 overall pick in the 1937 NFL Draft. He was inducted into the College Football Hall of Fame in 1977 and his No. 38 jersey was retired by Nebraska in 2017. Francis was also one of the top shot putters in the world during his Husker career. A two-time All-American and four-time Big Six Conference champion in the event, Francis was the 1937 NCAA shot put champion, and he finished fourth in the event at the 1936 Olympics.

Francis’ athletic ability was on full display during an 11-month period from August of 1936 to June of 1937. During that time frame, he finished fourth at the Olympics in August, was the Heisman Trophy runner-up and the No. 1 overall NFL Draft pick in December and won both the indoor and outdoor conference shot put titles in the spring on his way to the NCAA title in the event in June.

In addition to his impressive individual resume, Francis helped the football and track and field teams win a combined six conference titles in his three seasons with each sport. Nebraska posted its first-ever top-10 ranking in football in Francis’ senior season (No. 9 in final 1936 AP poll), after he played a key role in the track and field team’s eighth-place finish at the 1936 NCAA Outdoor Track and Field Championships.

Take a listen to the conversation between our AD and the grandson of @HuskerFBNation + @NUTrackandField legend, Sam Francis. ⤵️ pic.twitter.com/WsGUbw60Ik

Sam Francis was a two-sport star with legendary accomplishments. He was an All-American, Heisman Trophy runner-up and No. 1 NFL Draft Pick on the football field and an NCAA Champion and Olympian in track and field. A member of the College Football Hall of Fame, Francis put together arguably the greatest individual athletic year in school history during the 1936-37 season. His remarkable run began in August, when he placed fourth in the shot put at the 1936 Summer Olympics in Berlin, becoming the first Husker athlete in any sport to place at the Olympics. In the fall, Francis was a first-team All-American for the No. 9 Nebraska football team – the first top-10 team in school history – and finished second in the Heisman Trophy voting. He was then selected as the No. 1 overall pick in the 1937 NFL Draft, which was held in December of 1936. Francis capped his remarkable run by winning the 1937 NCAA shot put title. Overall, Francis was a two-time All-American in the shot put and a four-time Big Six champion in the event. In addition to his individual accolades, Francis was a member of two football and four track and field conference championship teams in his three seasons, and he helped both the football and track and field teams to a top-10 national finish. He went on to play four seasons in the NFL and also served as Kansas State’s head football coach in 1947 after a stint in the Army during World War II. Francis’ No. 38 football jersey is retired, and he graduated from the University of Nebraska with a degree in education in 1938. Francis passed away on April 23, 2002, at the age of 88.